This is the moment dozens of excited school children waiting to see an historic steam engine had their view ruined by a passing commuter train.

Students from St George’s Primary School had gather in a car park near Southend to eagerly await the Mayflower steam engine.

But just as the locomotive pulled out from an archway, a modern commuter train shot past in front of it.

The group of more than one hundred children had been given special permission to come out of school to watch the historic train, which was travelling from Southend East to Winchester.

The Mayflower, which was built in 1948, makes regular trips through Southend with a few key spots to see it pass.

Parent Katie Hazlewood, 35, went to down to watch it with her child, and found a large crowd already waiting.

‘We were stood in the car park of Shoebury Park as the train line passes by the top of it there,’ she told the Southend Echo.

‘The school had sent a note to parents saying that any children who wanted to watch it, could just come along to school afterwards which was lovely so most of the school was there.’

But as the steam engine approached, the cheers from the waiting crowd covered he sound of a commuter train passing from the other direction.

Though still making regular journeys in the South East, the B1 class locomotive attracts dozens of trainspotters and photographers along its route. 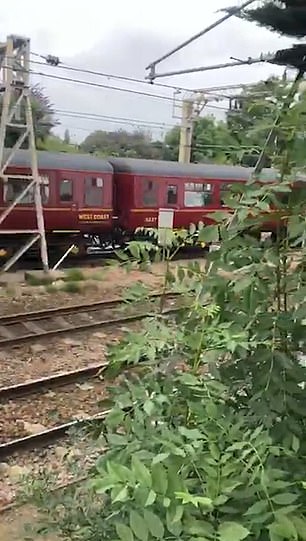