Schoolgirl, 14, who lured 13-year-old boy to park where he was stabbed to death is locked up

A 14-year-old girl who lured an autistic teenager to a park where he was stabbed to death has been jailed for three years while two other teenagers, also 14, have been sentenced to 13 and 12 years for murder.

The two boys, now aged 14, were said to harbour ‘grievances’ with their former friend Olly Stephens, whom they had met only online, in the lead-up to his death at Bugs Bottom field in Emmer Green, Reading, on January 3 this year.

Olly, who had autism, had been coaxed to the field by a 14-year-old girl, allowing the two boys to ‘ambush’ him with a knife.

His frantic parents raced to the scene, which was just moments from their home, after a witness raised the alarm, but he was already dead when they arrived.

Bike-mad Olly was ‘ambushed’ after he had apparently sought to defend another boy who was being humiliated in a group chat.

The two boys, now both aged 14, were convicted of murder following a trial, while the girl pleaded guilty to manslaughter.

All three were sentenced on Friday and cannot be named for legal reasons.

Olly’s attackers left him with stab wounds to the chest and back after a short scuffle at the scene.

The younger boy, who was 13 at the time, used a knife to stab Olly while the older boy was fighting with him, the trial at Reading Crown Court previously heard.

Olly Stephens, 13, was ‘lured’ to a park in Reading and fatally stabbed on January 4 this year 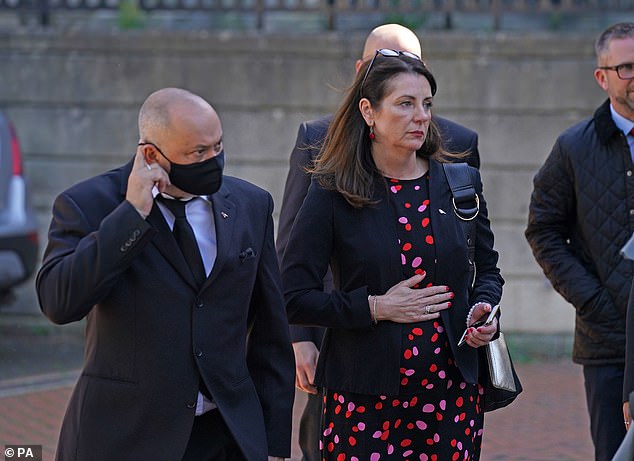 Jurors were told they had shared several messages on Snapchat in the days leading up to Olly’s death, which demonstrated hostility towards him.

The girl said in one message to one of the defendants: ‘Karma – he (Olly) deserves all of this.’

The older boy also said: ‘I actually hate the kid with a passion – if I was to see him right now I’d probably end up killing him’.

The mother and father of the murdered schoolboy have urged the parents of teenage children to ‘take their phones off them’ after warning how social media ‘played a massive part’ in their son’s death.

Stuart and Amanda Stephens said they remain ‘broken’ after the death of their ‘generous, caring and loving’ 13-year-old son in January this year, when he was lured to a park in Reading and fatally stabbed over an apparent online dispute with fellow schoolchildren.

Asked what words of advice they would offer to parents of children their son’s age, Mr Stephens said: ‘Take their phones off them and don’t give them back.’

Mrs Stephens said she had ‘no idea’ at the time how badly her son was being treated by others.

She said: ‘Keep asking questions, be suspicious, try not to be put off – you get batted away by your children, when you ask questions you don’t get answers.

‘Just keep going until you feel comfortable and trust your gut reactions as well.’

Mrs Stephens added: ‘If you don’t like the sound of friends, there probably is a very good reason why. 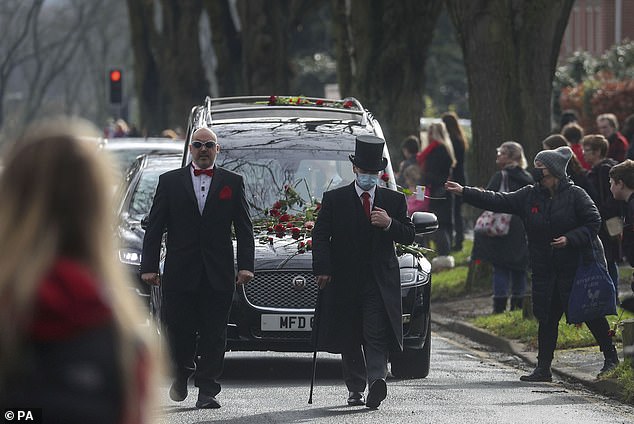 The funeral of Olly Stephens in Reading earlier this year. Bike-mad Olly, who had autism, was ‘ambushed’ at Bugs Bottom field in Emmer Green on the afternoon of Sunday January 3 after he had apparently sought to defend another boy who was being humiliated in a group chat 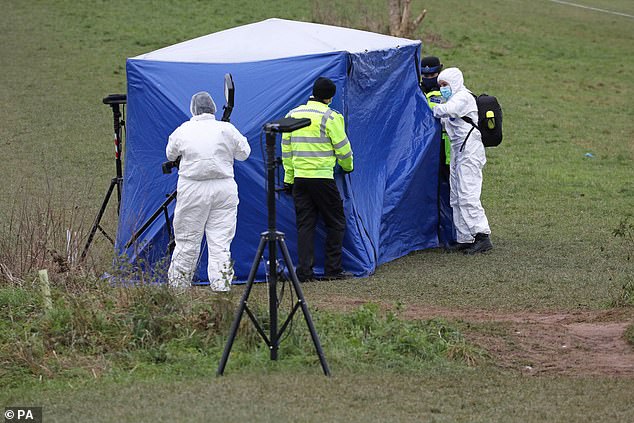 The two boys, now both aged 14, were convicted of murder following a trial, while a 14-year-old girl, who convinced Olly to go to the park as part of the set-up, pleaded guilty to manslaughter 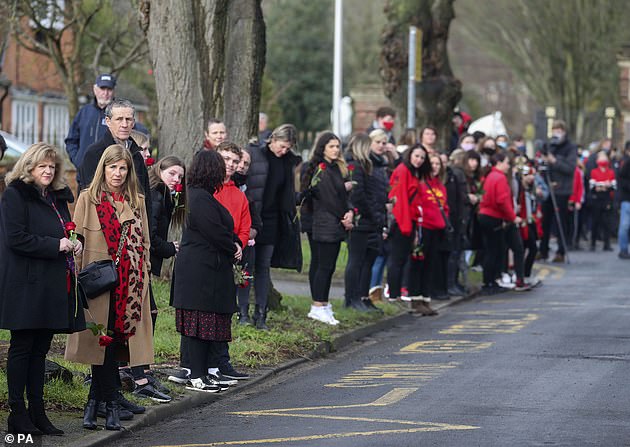 ‘It’s very hard because we can look back and say, as parents, we did our best job, loved him to bits and always tried to be there for him and talk to him.’

The detective leading the investigation into murdered school boy Olly Stephens described the case as ‘one of the most shocking’ of his career, and said social media speculation risked scuppering attempts to bring the 13-year-old’s young killers to justice.

But the welter of rumour and speculation online proved an additional challenge to detectives, who appealed on police social media channels for people to avoid speculation amid concerns about possible revenge attacks.

It included a claim that Olly was stabbed to death after a £154.94 bounty was placed on his head by a girl. The allegation was shared tens of thousands of times on social media in the hours after the murder, before being disregarded as ‘fake news’ by detectives.

Mr Howard said: ‘One of the challenges in the very early stages of the investigation was an awful lot of speculation.

‘And this (the ‘bounty’ allegation) was a prime example, ultimately, of one of those posts that was… an embellishment.

‘We had to go to some online bloggers and people who were posting blogs and stories and reporting on the case, perhaps not realising what the reporting restrictions were.’

He added: ‘Ultimately, the evidence provided a very strong case against the defendants.

‘We were really more concerned around the wider risk and repercussions, and people taking matters into their own hands, which clearly would have been, at best, very unwise, and, at the worst, against the law.

‘We just wanted to try and minimise the risk of that happening.’

He said: ‘There was no thought for anybody else in this.

‘And the consequences they were going to pay just didn’t seem to register with them.

He added: ‘I think social media’s got a lot to answer for and played a massive part in Olly’s death.’

Mr Stephens recalled how he detected Olly was troubled by something in the days prior to his murder, and pleaded with his son to confide in him.

‘I said to him: it’s my job to protect you, you need to tell me what’s going on,’ Mr Stephens said.

‘I just couldn’t get it out of him – ‘Snitches get stitches’ is all he’d say.’

‘There seems this whole gangster mentality is seeping in … like they believe this is a video game.

‘That’s how they see it, because I have heard that they now earn points for damage they do to other people with weapons.

‘So it’s a scary situation, it really is.’

Mr Stephens said the word ‘devastating’ did not adequately describe his family’s grief.

Olly’s mother added: ‘We’re broken. You know you’ve got to keep going and you do keep going, but the joy is gone.’

Mrs Stephens, mother of murdered 13-year-old Olly Stephens, told Reading Crown Court she was unable to understand why none of the teenagers present at the scene of the crime had stepped in to help him.

At the sentencing of the three 14-year-olds convicted of his killing, Mrs Stephens said in a statement: ‘Why didn’t just one of them to step in to stop it happening, why didn’t one care enough to stand up for him?

‘Olly always stood up for the underdog, it got him into trouble, but that was just him.’

In a victim impact statement, Olly’s father Stuart said: ‘I had one job as a father, to protect my children, and I failed miserably – I will never forgive myself.’

He added: ‘[Olly] didn’t deserve his fate no matter what he might have said or done, no child deserves such a callous fate.’

Speaking at the sentencing hearing on Friday of the three teenagers convicted of Olly’s killing, Mr Stephens said: ‘We are strong enough to deal with most problems thrown our way but this has completely broken us.’

‘He knew no sense of danger, he stood up for himself in a confrontation and was unable to back down, but was kind and loving.’

Mr Stephens described the ‘utterly horrific’ moment he was told his son’s body was now forensic evidence, and that he would no longer be able to hold him or touch him.

‘Had he asked me for help that day, I would have moved heaven and earth to give it to him,’ he said.

The girl pleaded guilty to manslaughter and perverting the course of justice by deleting data from her mobile phone.

The trial was held in special conditions, with frequent breaks and counsel removing their gowns and wigs, due to the defendants’ ages.

Speaking at a press conference, the parents recalled the moment they realised their son was dead.

Mrs Stephens said: ‘I went to the door and it was a boy that I knew, he said ‘Olly has been stabbed’.

‘I remember running back to the stairs and shouting ‘Olly has been stabbed’… [Stuart] ran out without [his] shoes on over to the field.

‘Stuart just fell to his knees screaming ‘my boy, my boy, no!’ He screamed that.

‘And I looked over and Olly was just completely lifeless. Someone was trying to do CPR but the colouring of his skin…he had gone.’