Schoolgirl, 16, was pulled out of a GCSE exam to be told she had cancer

A schoolgirl who complained of feeling tired was rushed to hospital during a GCSE exam to be told she had a tumour wrapped around her windpipe.

Hannah Fraser was given iron tablets for ‘anaemia’ when she complained of feeling fatigued to her GP.

After three more visits, the 16-year-old was referred for a CT scan. While she awaited the results, Hannah sat her PE exam on May 18 last year, only for her father Duncan Fraser to show up halfway through.

With her headteacher’s permission, Hannah left the exam for hospital, where doctors told her she had a tumour. A week later they confirmed it was Hodgkin lymphoma.

The teenager had her lymph nodes removed and also endured chemo. While going treatment, Hannah sat her GCSEs at home with an invigilator.

Thinking she would have ‘failed them all’, the teenager cried with happiness when she discovered she had achieved seven GCSEs.

And the good news did not end there, Hannah, of Formby, Merseyside, was told on October 16 she was in remission and required no further treatment. 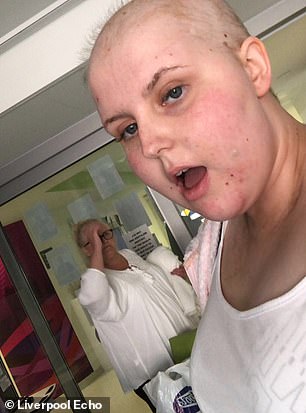 Hannah Fraser was rushed to hospital during a GCSE PE exam to be diagnosed with cancer. Pictured left before, the then 16-year-old appeared ‘fit and well’ but had been battling fatigue for weeks. Once diagnosed, Hannah endured surgery and chemo, which caused her to lose her hair (seen right) and gain 3st (19kg), which she described as ‘the worst thing’ 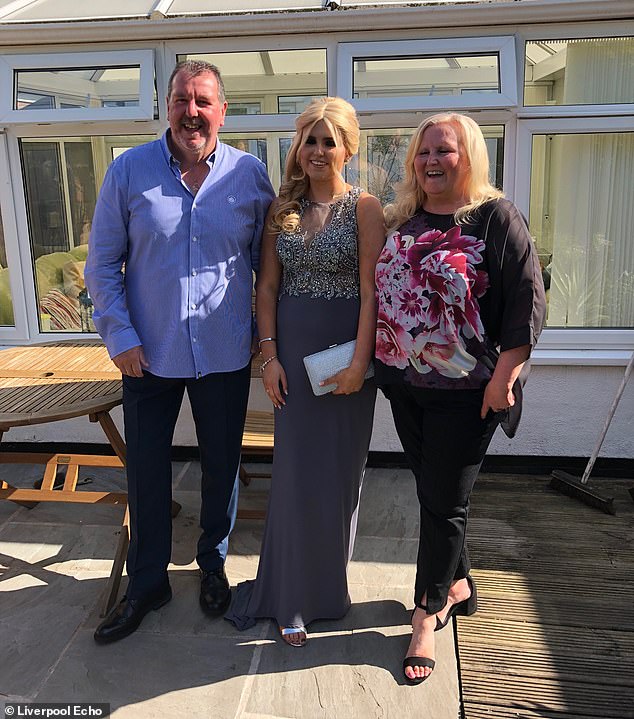 After initially refusing to go to prom ‘looking like that’, Hannah decided to attend when she could still fit in her dress. She also wore a wig, which she curled, and had her make-up done. Hannah is pictured before the event with her parents Duncan Fraser and Denise Carver

Hannah’s mother Denise Carver, 57, claims her daughter was taking increasing doses of iron tablets to try and combat her fatigue.

‘They didn’t work so we went back about three weeks later and they upped her dose,’ she said.

When this did nothing to help, the teenager was referred for a CT scan. She was sitting her PE exam at Range High School when the results came back.

‘The nurse rang me to say something has shown up on the scan,’ Ms Carter said

‘I’d just dropped her off at school to do her PE exam but we had to go and collect her because they wanted to admit her straight away.’

Hannah added: ‘I was just stood outside the exam room going into my PE exam when my friend said, “Your dad is here”.

‘I tried not to think about it because I was about to do an exam but then I heard the headteacher walking down the corridor.

‘She told the exam invigilator, “I will sort her papers out” and she told me I’d be okay but I needed to go to hospital.’

Hannah was driven to Alder Hey Children’s Hospital in Liverpool by her father.

‘When we got there we had to go to ward 3B and when we went in I knew straight away I had cancer because of all the posters on the wall,’ she said.

‘We waited to see a professor and he told me, “You have a tumour around your windpipe”.

‘He said he was pretty certain it was Hodgkin lymphoma but they would do a biopsy to check.’

Hannah underwent a biopsy the following week, which confirmed her diagnosis.

‘They couldn’t believe she was that fit and well when they saw her, they thought she was going to be in so much pain,’ Ms Carter said. 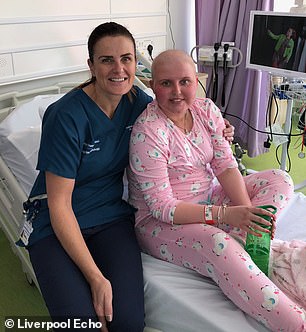 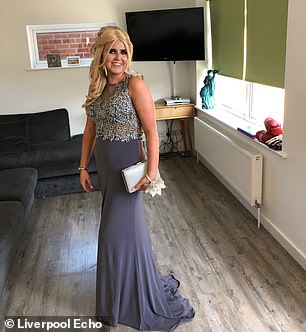 Hannah (pictured left with a nurse in hospital) claims her illness only sunk in when she woke to find clumps of hair on her pillow and her face ‘so swollen’. She decided to attend her prom (right) when she had ‘slight bloating on her belly, nothing major’

The teenager had her lymph nodes removed, as well as chemo and a course of steroids.

‘I think it properly sunk in when I lost my hair,’ she said. ‘I woke up one morning and there was clumps of hair on my pillow.

‘And another day I woke up and my face was so swollen, that was when it sunk in that this is what I’m going to look like.

‘I put on three stone [19kg] because of the steroids, that was probably the worst thing.’

While she endured all this, Hannah continued with her GCSEs. On August 22, she discovered she had achieved seven GCSEs, including English, Maths and Science.

‘I didn’t really expect to pass any of them,’ she said. ‘I didn’t want to open my results with everyone else so my teacher took me into her office.

‘When I opened the envelope I burst out crying I couldn’t believe it, I rang my mum crying.

‘She was standing with the other mums and she thought I was crying because I was upset at first but they were happy tears.

‘She ran over and hugged me and then all the other mums came running over afterwards, it was really good.’

Hannah also attended her prom that summer, despite initially being self conscious of her appearance.

‘The first thing I said when I got diagnosed was, “there’s no way I’m going to prom looking like that”, when the doctors told me I’d lose my hair and put on weight,’ she said.

‘But by the time of my prom I only had slight bloating on my belly, nothing major, so I could still fit into my dress.

‘I wore a wig, which I curled, and I got my tan and make-up done, it was really good.’ 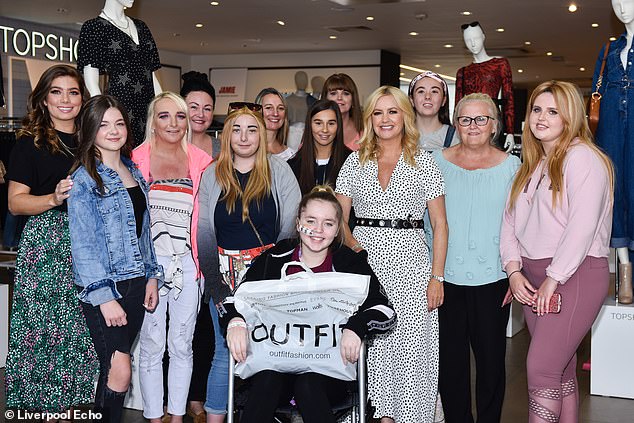 Hannah has been taken on numerous trips with the charity Rays of Sunshine. Last week, the charity arranged for Hannah to meet members of the Hollyoaks cast at the clothing store Outfit in Liverpool and have a makeover. She is pictured with the cast and other cancer patients

Less than two months after her exam results came back, Hannah received a call from her doctor to say she was in remission, just days before her 17th birthday.

Hannah will have check-ups for the next five years, before she is in the all-clear.

The teenager will soon start her A-Levels. In the future, she hopes to either work for the police or do hair and make-up for TV.

‘I’m so proud of her she was so strong and so positive throughout it,’ Ms Carter said.

‘You can’t believe this time last year what she was going through.

The charity Rays of Sunshine took Hannah on a number of trips throughout her illness, including a family holiday to Euro Disney and a Take That concert.

Last week, the charity arranged for Hannah to meet members of the Hollyoaks cast at the clothing store Outfit in Liverpool and have a makeover.

‘I went to Outfit on Edge Lane with Alex Fletcher and Nicky Sanderson from Hollyoaks,’ she said.

‘I got my make-up done and they came around the shop with us and helped me pick my clothes, they were really nice and we got to keep all the clothes at the end.’