More schools and hospital wards have been forced to shut due to outbreaks of the highly contagious norovirus.

Students from Howden School in Goole, East Yorkshire, were reportedly sent home on Monday and told not to return until Thursday.

While Parkside School in nearby Bradford closed on Tuesday for a deep clean after more than 15 per cent of its pupils and staff were struck down.

And Southampton General Hospital in Hampshire confirmed it has closed bays on six wards after a flurry of norovirus cases.

The cases come shortly after hospital wards and schools in other areas, including South Wales, Devon and Teesside were hit by the illness.

Staff are reminding people who think they have norovirus not to visit hospitals because they risk passing it on to others.

Norovirus spreads rapidly in hospitals and schools because people are in close quarters, while children can forget to practise proper hygeine.

Some schools in Northern Ireland have seen more than 100 pupils off sick at a time, the BBC reported.

Around a quarter of the 360 pupils at Clandeboye Primary in Bangor, County Down, are off sick. The school has been closed today.

Headteacher Julie Thomas said it was an ‘unprecedented outbreak’, and when children returned to school after recovering, they would be re-infected.

Killinchy Primary School, in Newtownards, County Down, was closed voluntarily on Friday for a deep clean after people fell ill.

Headmaster Christopher Currie told the Irish Mirror: ‘We have two types of illnesses running parallel, the flu-type illness and the vomiting norovirus. The two things side-by-side are wiping us out.

‘For our P7s, this has landed right on their AQE exams. The poor children have been working for a year and a half, two years in preparation for this test but on Saturday morning it all kicked off and a number of children didn’t sit their AQE.

WHAT IS NOROVIRUS AND HOW LONG WILL IT TAKE TO CLEAR UP?

Norovirus is one of the most common stomach infections in the UK and it is referred to winter vomiting bug as it usually occurs in winter.

Usually it clears up by itself within 24 to 48 hours but it can very serious for already frail patients, and can lead to dehydration.

The virus, which can also cause diarrhoea, is extremely contagious and can create huge disruption in hospitals as it spreads so quickly between patients.

But the winter vomiting bug has a tendency to mutate and some strains are worse than others, leading to higher numbers of infections.

‘It’s very frustrating that parents will send their children back to school despite the guidance we have given to please exclude for 48hours – we had kids in school who we know were sick last night and their parents sent them back this morning.’

Local media have reported ward closures across the country, with hospitals in Devon, Warwickshire and Swansea affected.

At Southampton General Hospital, a spokesperson said bays had been closed on six wards to contain the virus.

The University Hospital Southampton website states: ‘The Trust has been under sustained pressure for the past week and currently has a large number of beds closed to new admissions due to norovirus.

‘This is affecting the flow of patients out of the emergency department and into the appropriate locations.

‘We would like to reassure patients that we are taking a number of steps to address current capacity issues.

‘Visitors are encouraged to wash hands carefully with soap and water both before and after visiting a clinical ward area.’

Last week, it was reported aound 60 schools in the North East have had pupils and staff off sick with the flu-like illness. 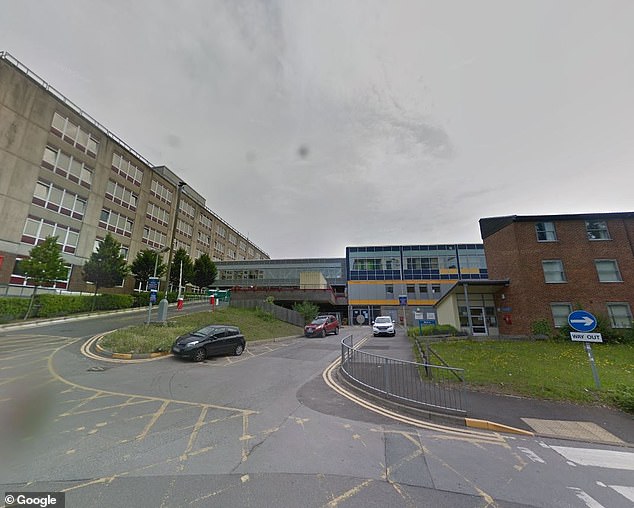 Bays on six wards have been closed at Southampton General Hospital, official said, to contain a norovirus outbreak

And there were also been reports of an outbreak at a Lego event in Bristol and primary schools in Kent, Teesside and North Tyneside.

Statistics published on November 21 suggest norovirus rates are 26 per cent higher than they usually are at this time of year.

A total of 332 people are confirmed to have had the bug between October 28 and November 10.

Health officials have again warned people with symptoms of the illness not to go to hospitals or GP surgeries because they might spread it to others.

Norovirus is more likely to cause vomitting in children while adults may have more diarrhea. Other symptoms include a high temperature (38°C or higher), a headache or achey arms and legs.

The best way to protect yourself or infect others is to wash your hands frequently with soap and water – alcohol hand gels don’t kill norovirus, NHS warns.