School is back in for thousands of children around the world as they return to classrooms after months in lockdowns – where their first lesson has been in social distancing amid the lingering threat of coronavirus.

Pupils in Finland, who returned on Thursday, were pictured giving each-other air hugs as a greeting while students in the Netherlands were separated by plastic dividers as they returned to their desks.

Students in Germany, Canada, Australia, China, Switzerland, Denmark, Greece, the Czech Republic, Cyprus and Israel have also been allowed to return with measures including splitting classes in half and teaching them at different times of the day to keep pupils safe.

That stands in stark contrast to the UK which has yet to produce a plan for getting the majority of students back to classes during this school year – putting the nations alongside  Spain and Italy, where only a few children are expected to return to classes before the summer holiday. 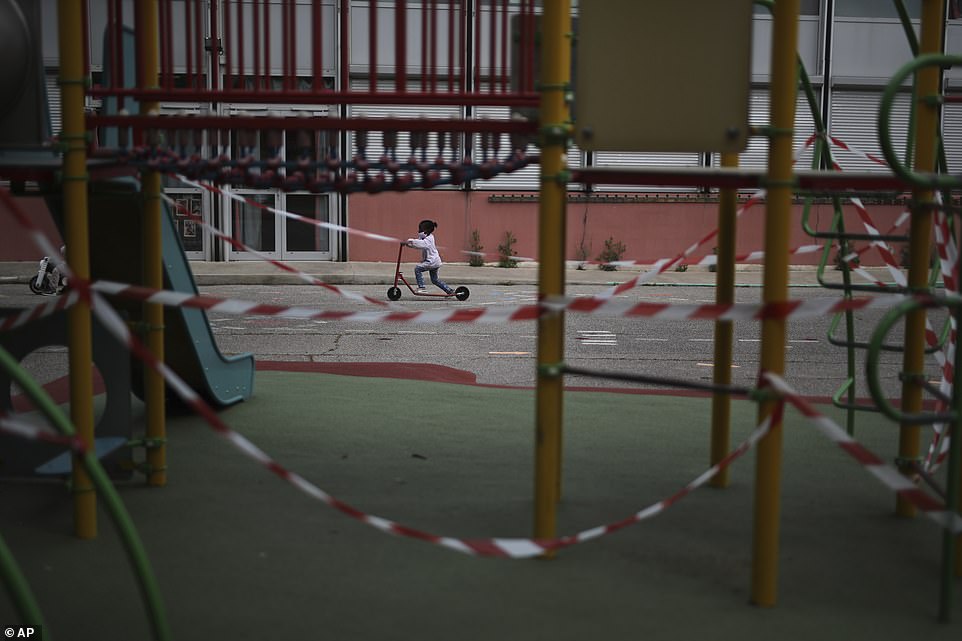 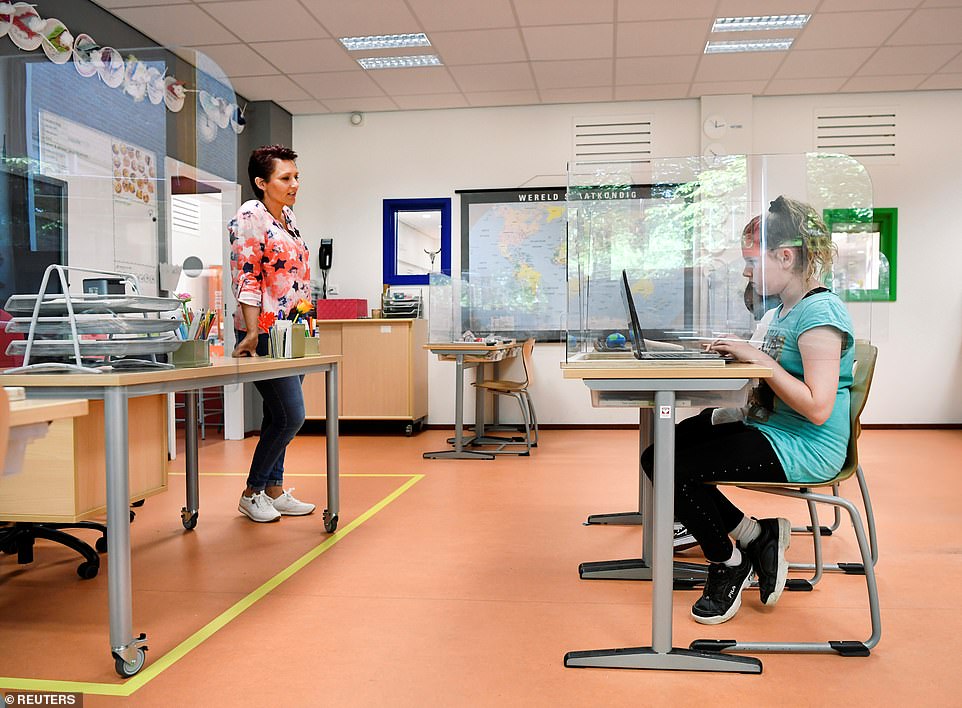 Scientists are divided on the risks of sending children back to school – while they largely escape coronavirus symptoms they are known to be carriers of the disease and there are fears they will infect adults around them.

But restarting classes will be key to getting the global economy back up and running since parents who are forced to keep their offspring at home will be unable to return to their jobs.

There are also fears it will cause lasting economic damage for a ‘lost generation’ whose learning will be irreparably damaged by being kept away from their teachers, leading to a skills shortage in the future.

Classes restarted today for most Finnish children as a host of coronavirus measures were relaxed across the country as its outbreak steadily decline throughout April.

However, pupils and teachers were photographed ‘air hugging’ as a greeting in playgrounds in order to maintain strict social distancing rules.

Pupils were also advised to wear gloves to help protect them against the virus, while teachers were seen instructing them on how far apart they needed to stand while lining up for classes.

Finland has reported a total of 6,145 cases of coronavirus and 284 deaths from the disease. 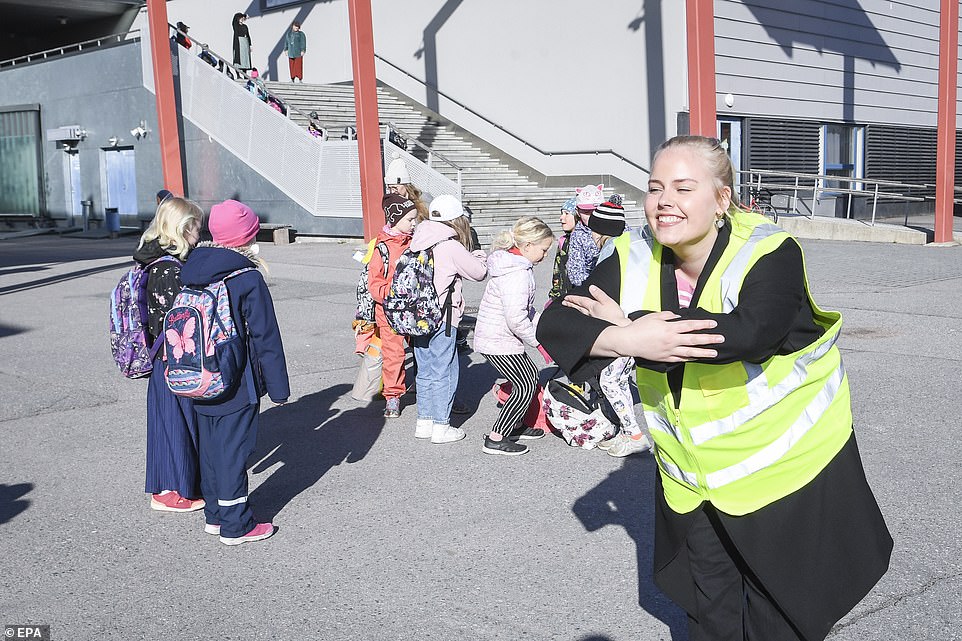 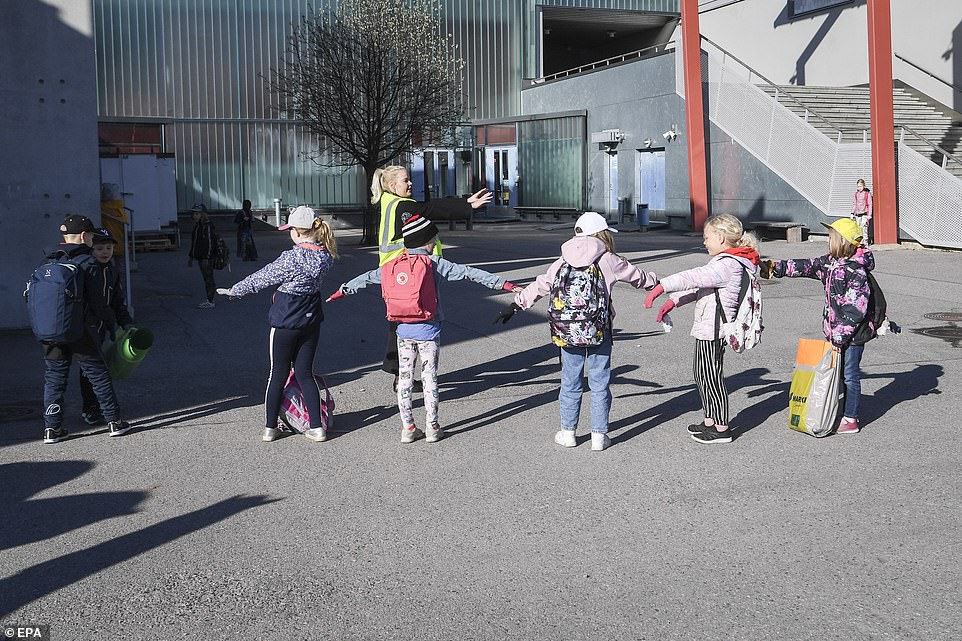 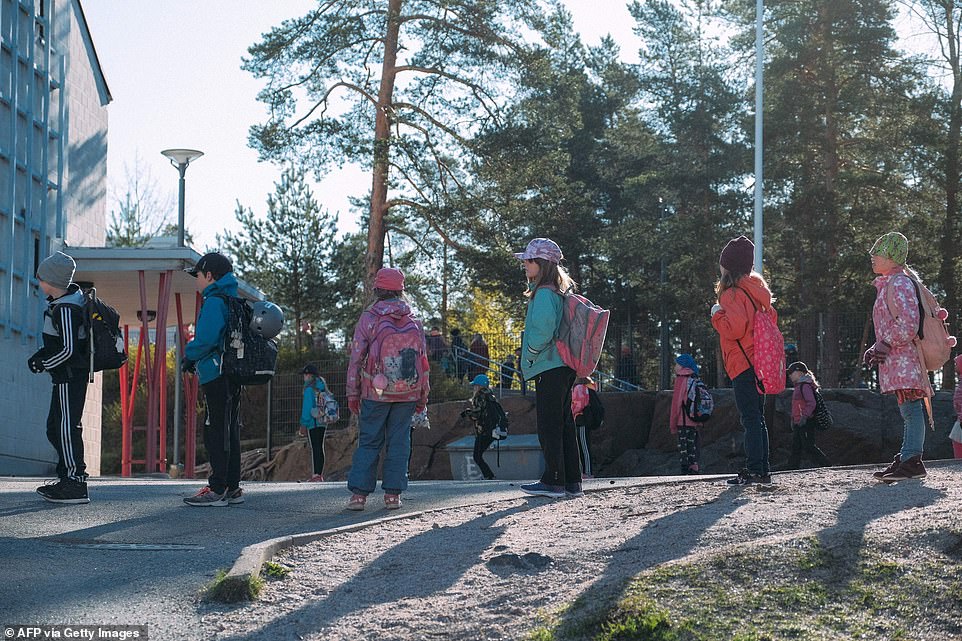 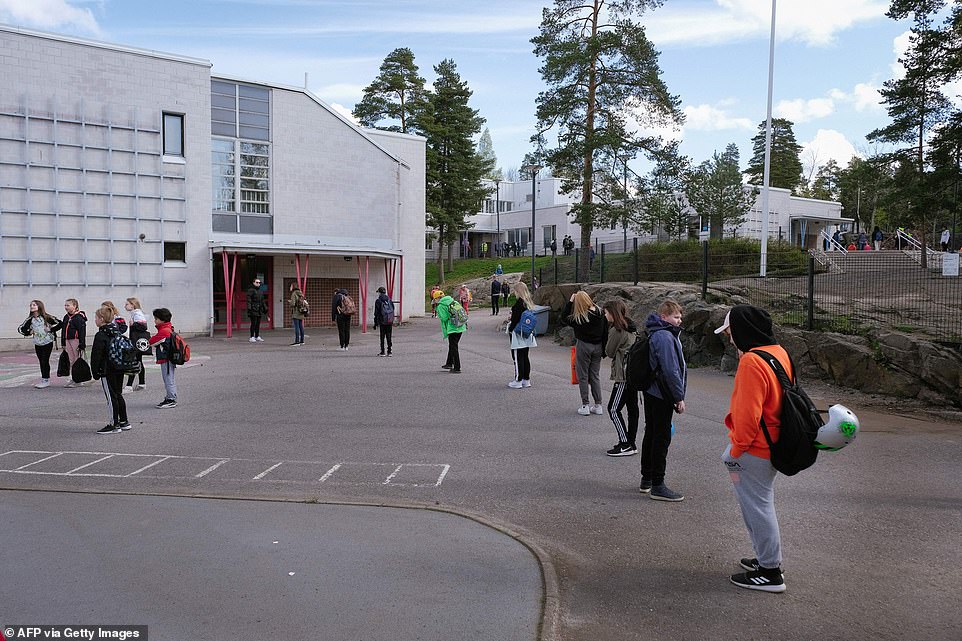 From Thursday the country will also allow overseas travel to Schengen Zone member states, and will restart ticket sales for ferries.

People will also be allowed into Finland from overseas to work, but will have to provide documentation explaining why the journey was essential.

Meanwhile outdoor exercise areas were also reopened provided gatherings are limited to 10 people maximum, with that limit set to rise to 50 people on June 1.

Restaurants, swimming pools and museums are also set to reopen on June 1, along with other small businesses.

French kindergartens and nursery schools were allowed to return on Tuesday following an inset day for teachers on Monday, when much of the country’s lockdown was lifted.

However, strict social distancing measures have continued to remain in place, meaning pupils must be kept apart in the playground and in the classroom.

That led to a heartbreaking image from one school near the Belgian border showing pupils sitting alone in chalk ‘isolation squares’ in the playground. 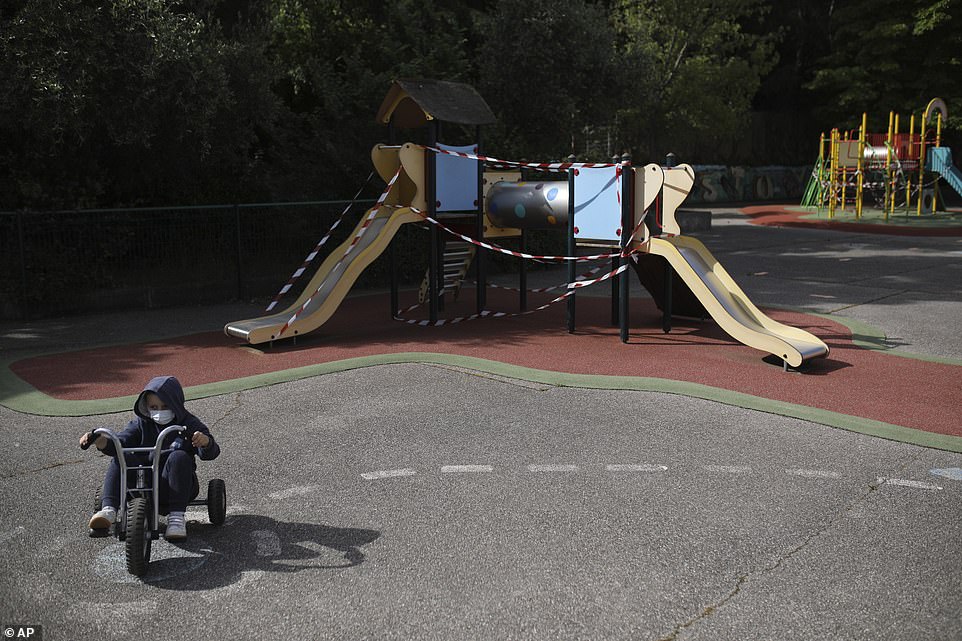 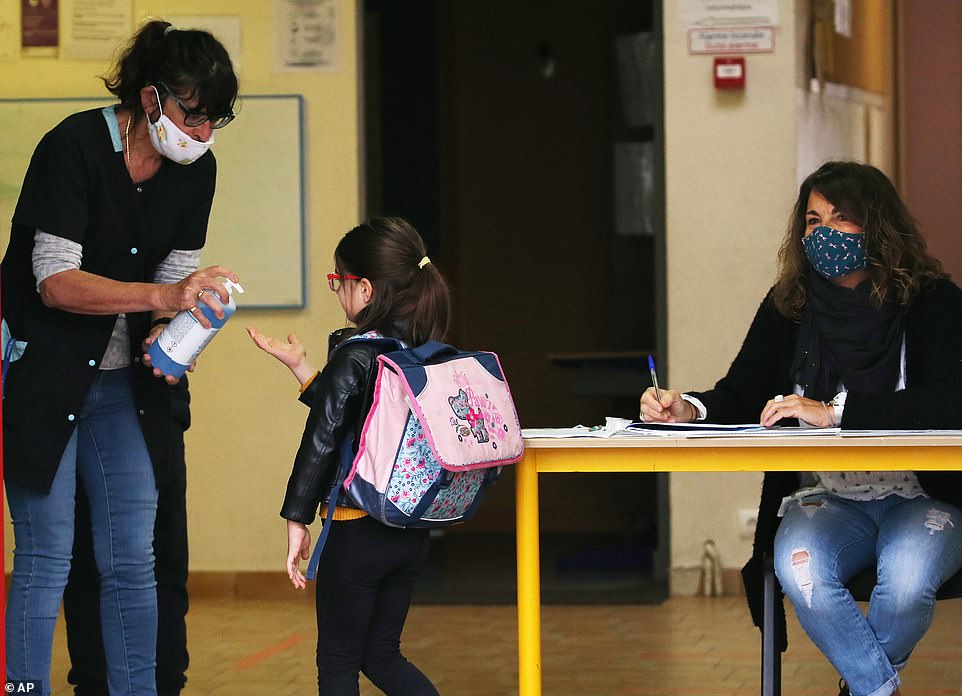 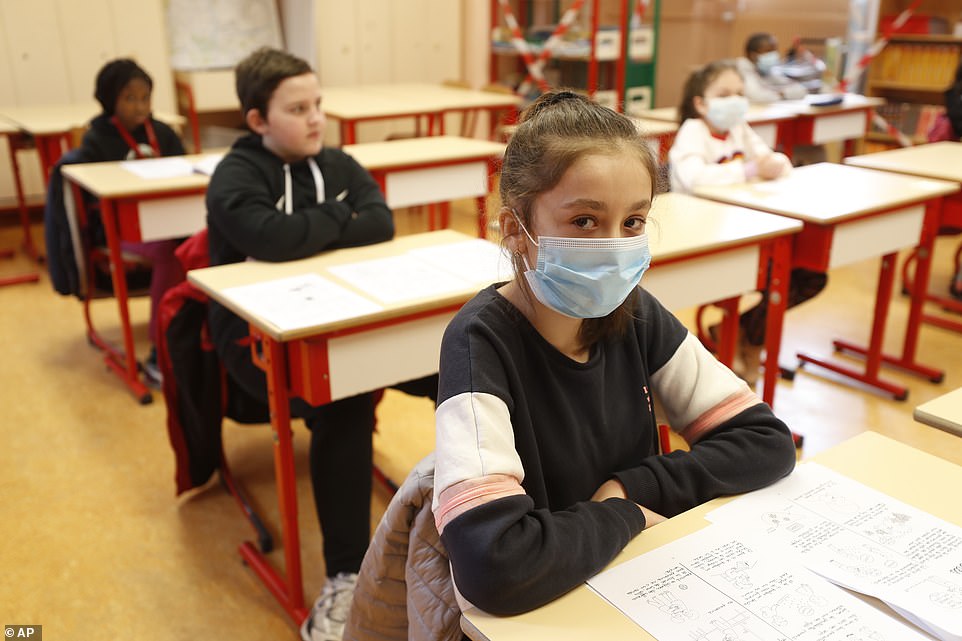 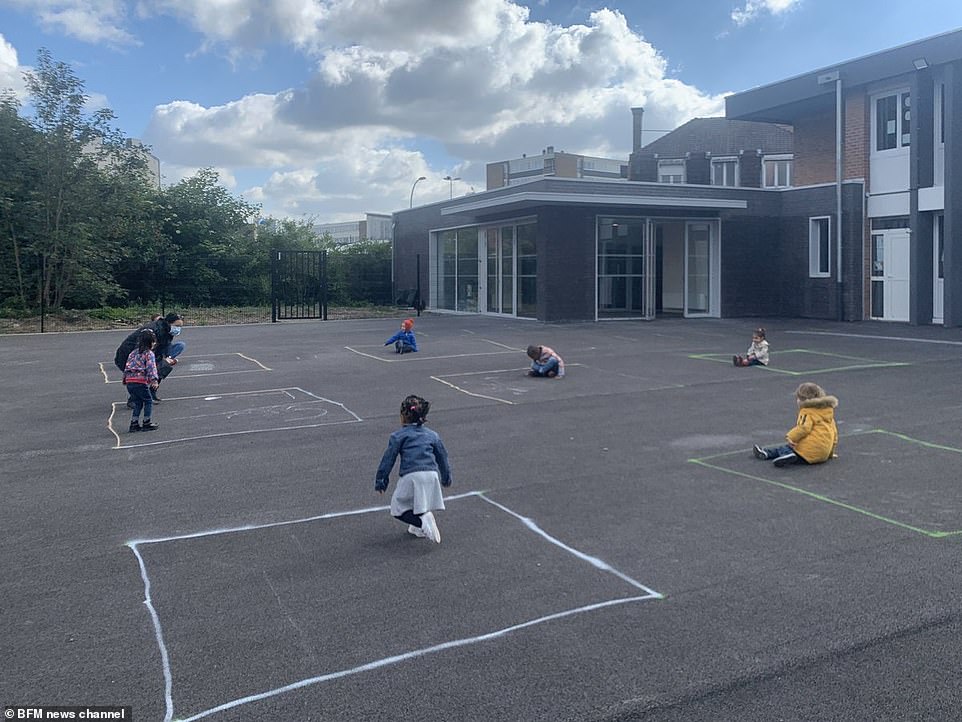 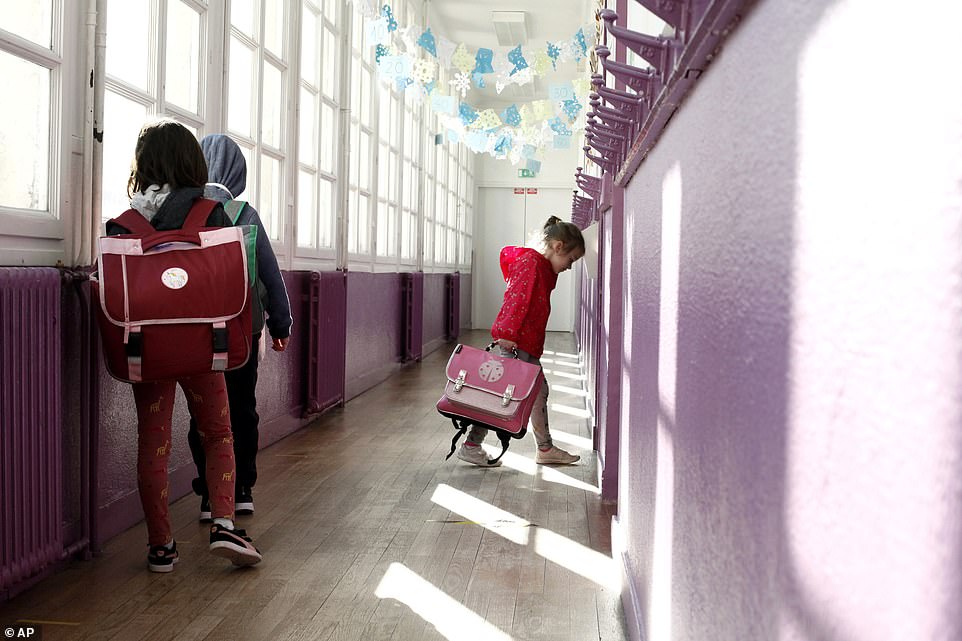 The French government declined to comment on the case, saying it was up to each school how best to separate students, but stressing that social distancing must be maintained.

While the majority of French pupils remain at home, those measures are due to be reviewed on June 1 when further restrictions will be lifted in ‘green’ departments – areas where the infection is less prevalent.

The country has reported 178,060 cases of coronavirus and 27,074 deaths, making it among the world’s hardest-hit countries with the virus.

Other measures eased on Monday include the opening of most shops and retail businesses, allowing people to venture up to 60 miles from their front door without a permit, and allowing public meetings of up to 10 people.

Angela Merkel pushed ahead with plans to reopen schools starting last month, despite warnings it could cause a spike in cases, with strict social distancing measures in place.

In most schools, that has meant dividing classes in half and teaching on alternate days, leaving parents in the unenviable position of having their children at home every other day – delaying returns to work.

Pupils are required to wear masks into school and in the playground, but most are allowed to take them off once they get into class. 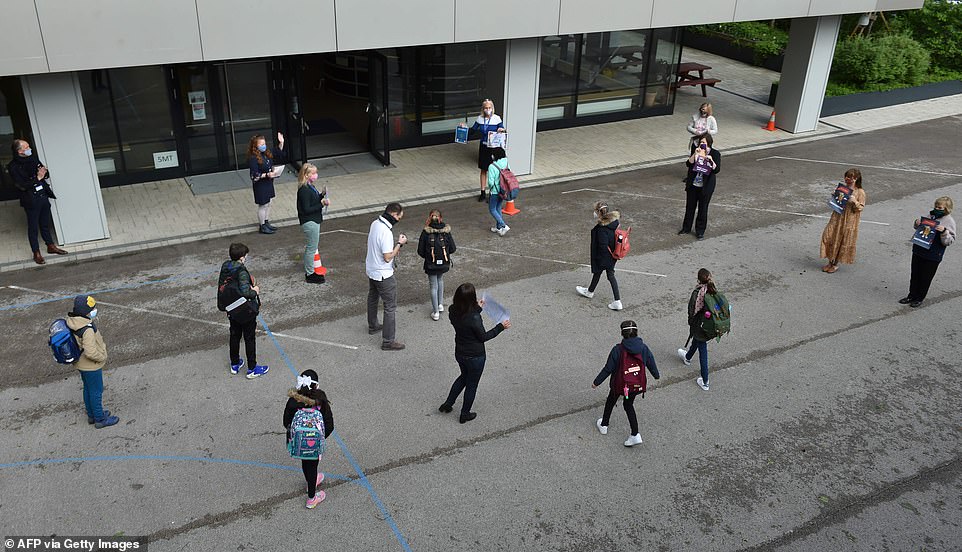 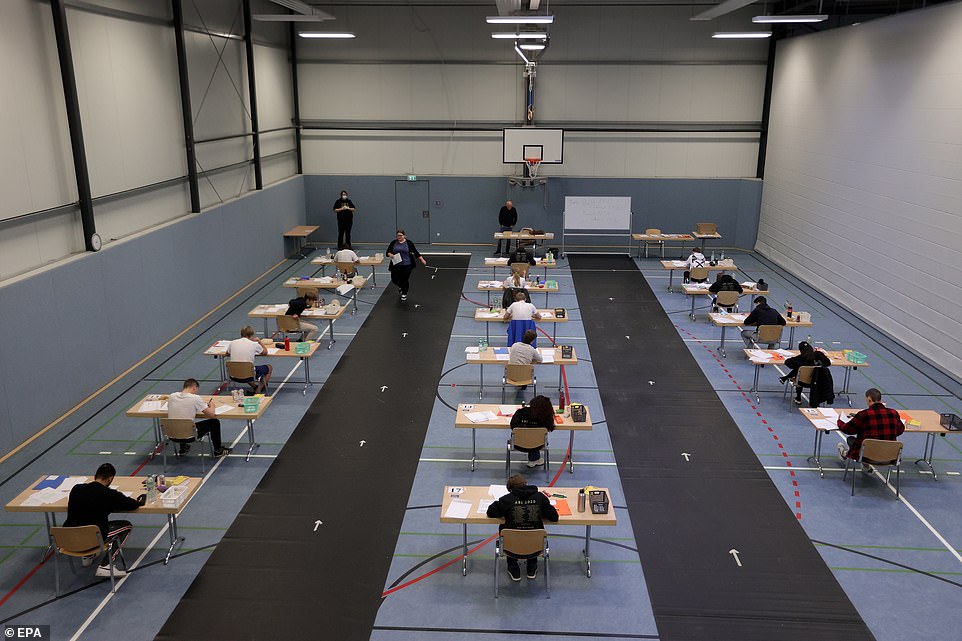 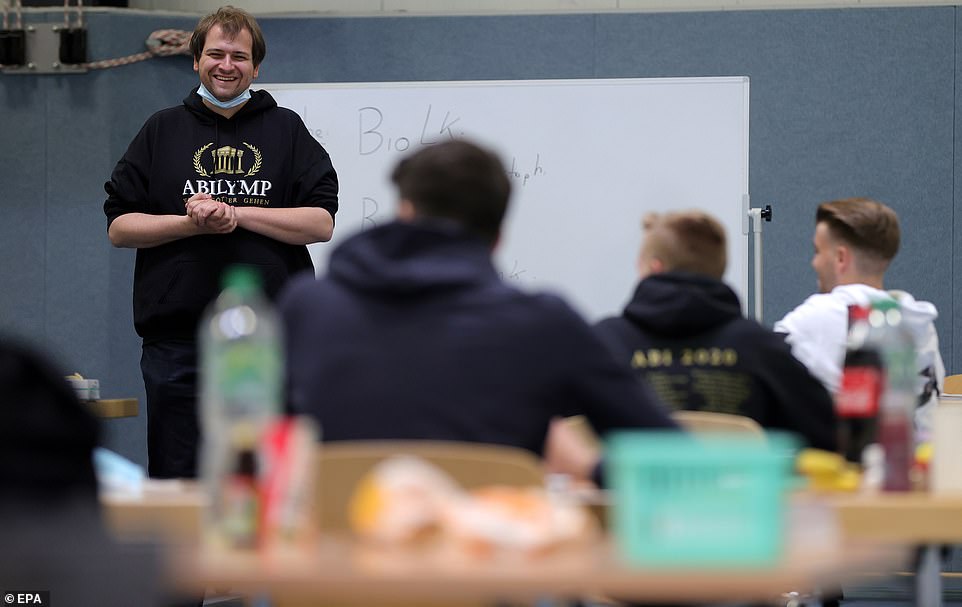 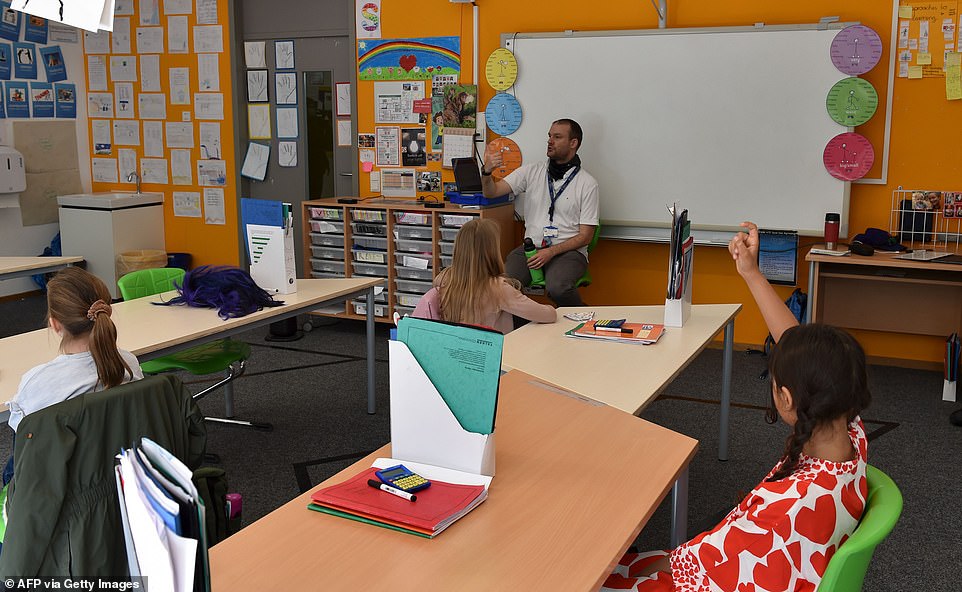 One school in the north of the country has won plaudits after partnering with a local laboratory to offer students virus tests twice per week – with results coming back the same afternoon.

The headmaster claims this has allowed him to safely keep classes at normal size, since any infection will be quickly picked up and students isolated.

Germany has reported 174,098 cases of coronavirus – the eighth highest total in the world – but just 7,861 deaths, and has won international praise for its highly organised response.

Primary and elementary schools returned this week, though classes have been split in half – with one half being taught in the morning and the other in the afternoon – to maintain social distance.

Parents have also been advised to drop their children at the gate rather than directly to their classrooms in order to avoid the risk of infection.

Students are allowed to play together, but only in half-class groups. Elderly teachers or those deemed to be in a vulnerable group have not been required to return to work while some have marked out ‘safe spaces’ for themselves at the front of classrooms. 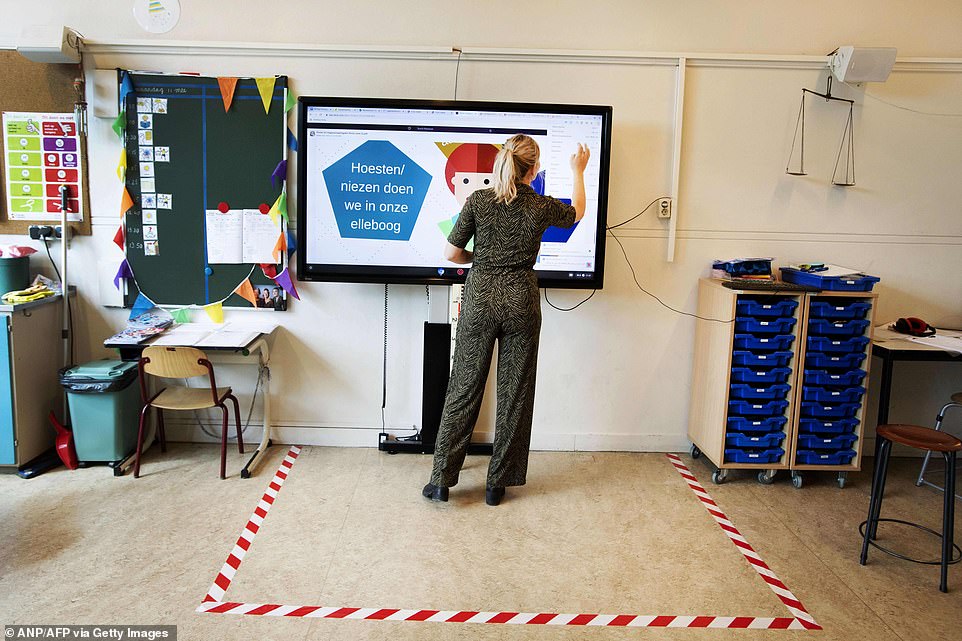 The Springplank school in the city of Den Bosch took things a step further, installing plastic shields around students’ desks and disinfectant gel dispensers at the doorways.

‘Our teachers are not worried,’ said Rascha van der Sluijs, the school’s technical coordinator. ‘We have flexible screens that we bought so we can protect our teachers if students are coughing.’

The Netherlands has 43,410 cases of coronavirus and 5,581 deaths. Cases have been declining for weeks.

Schools across most of the country’s second-most populous province of Quebec reopened on Monday this week, despite the region accounting for a majority of the country’s coronavirus cases and deaths.

Elementary schools and kindergardens outside of Montreal, the province’s largest city, were allowed to restart lessons with reduced class sizes and social distancing in place.

However, they are expected to follow by the middle of next week, with the aim of having all daycare centres and elementary schools reopen by May 19.

That approach is not being mirrored in neighbouring Ontario, Canada’s most-populated state, where governors have not even suggested a possible date for schools to reopen.

Premier Doug Ford said he could not provide a timetable for allowing people in non-essential businesses back to work until the numbers of new cases began dropping steadily.

‘I won’t set hard dates until we’re ready, because the virus travels at its own speed,’ he told a briefing.

All 10 of Canada’s provinces have declared health emergencies, shutting down firms across the country and throwing millions out of work.