Agriculture Secretary Sonny Perdue, delivering on a promise he made when he took office in May 2017, said schools under the current rules faced challenges serving meals that were both appetizing and nutritious.

‘If kids are not eating what is being served, they are not benefiting, and food is being wasted,’ Perdue said in a statement.

The Trump administration has vowed to slash regulations, which it says are burdensome for industries such as oil and coal, and has already rolled back a number of Obama-era rules as part of its business-friendly agenda.

President Donald Trump (seen above eating McDonald’s on his private plane during the presidential election campaign) is doing away with healthy eating restrictions on school lunches put in place by his predecessor’s wife, former First Lady Michelle Obama 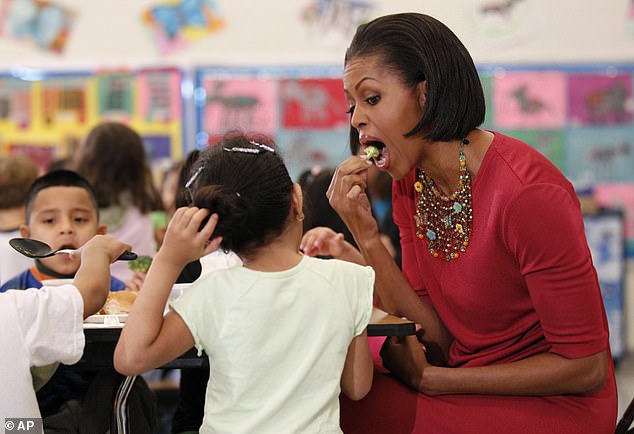 As First Lady, Michelle Obama sought to promote healthy eating habits among the youth. She is seen above eating broccoli during an appearance with schoolkids at an elementary school in Maryland in 2010

The 2010 Healthy, Hunger-Free Kids Act was championed by Michelle Obama and became a rallying cry for her critics after it set school lunch maximums for calories, cut sodium and artery-clogging trans fat, and required more fruits, vegetables and whole grains.

The new rules will provide the option to offer flavored, low-fat milk to children and more time to reduce sodium levels in school meals.

The former First Lady was known as an advocate for healthier eating, but users of social media posted gruesome images showing school lunches that didn’t look so edible after the Obama-era regulations were put in place.

Trump, meanwhile, is known as a man who doesn’t partake in good nutrition.

In August, it was reported that his wife, First Lady Melania Trump, asked the White House kitchen to prepare healthier meals for the President.

Donald Trump is notoriously a lover of fast food – drinking multiple cans of diet coke a day and taking in McDonald’s and KFC regularly.

This may have been the first lady’s attempt to stifle his streak of fast food indulgences which may have contributed to the 72-year-old’s body mass index of 29.9. 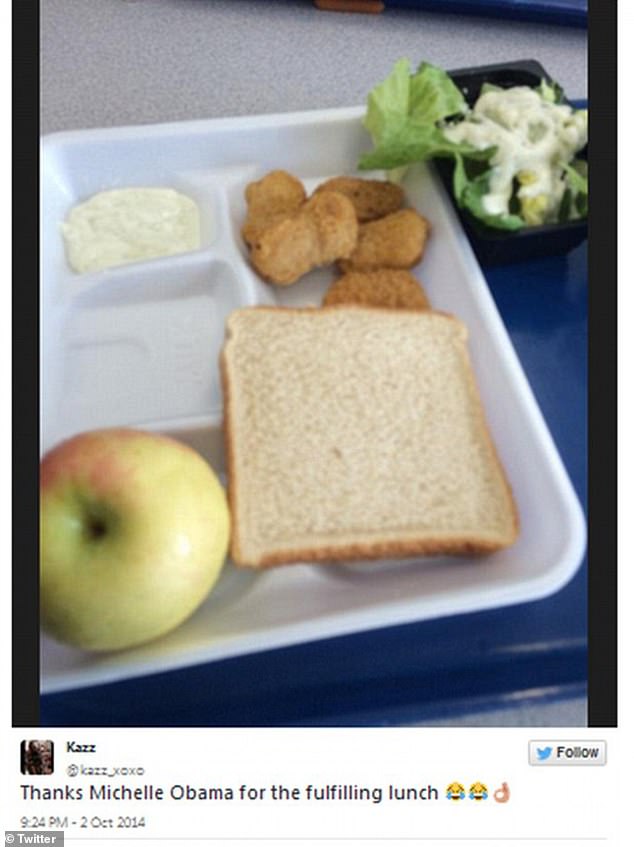 The former First Lady was known as an advocate for healthier eating, but users of social media posted gruesome images showing school lunches that didn’t look so edible after the Obama-era regulations were put in place 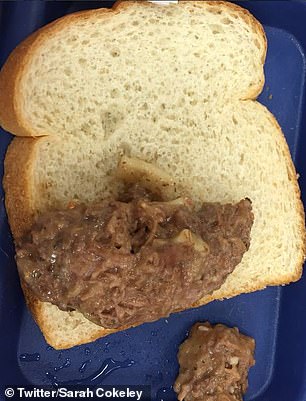 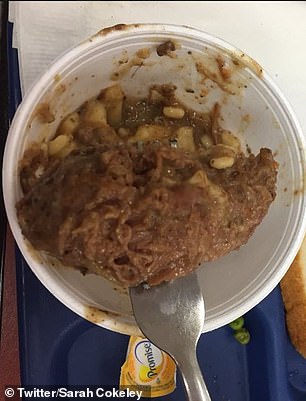 Is that meat or a ‘mummified rat’? This image was uploaded to social media showing a school lunch after Obama-era regulations were put in place 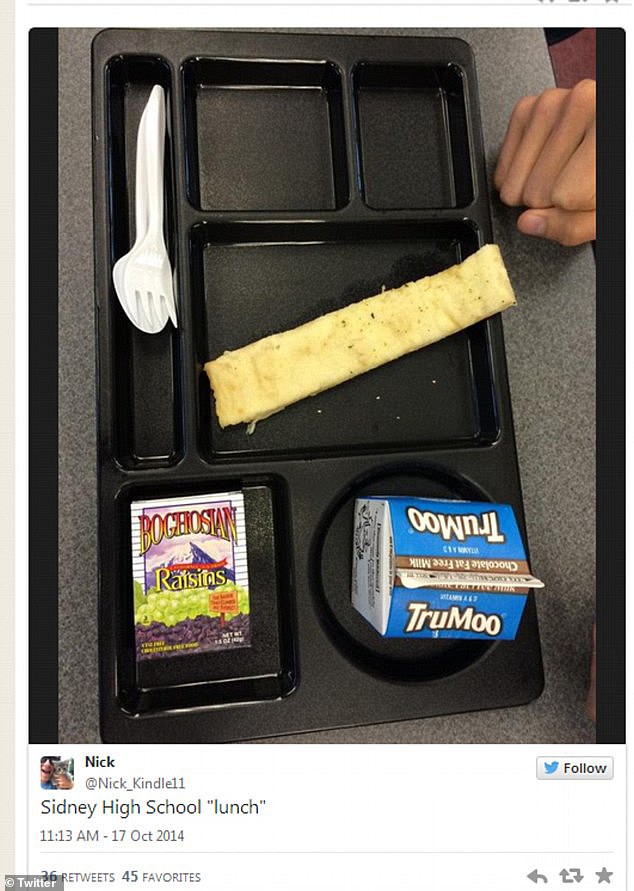 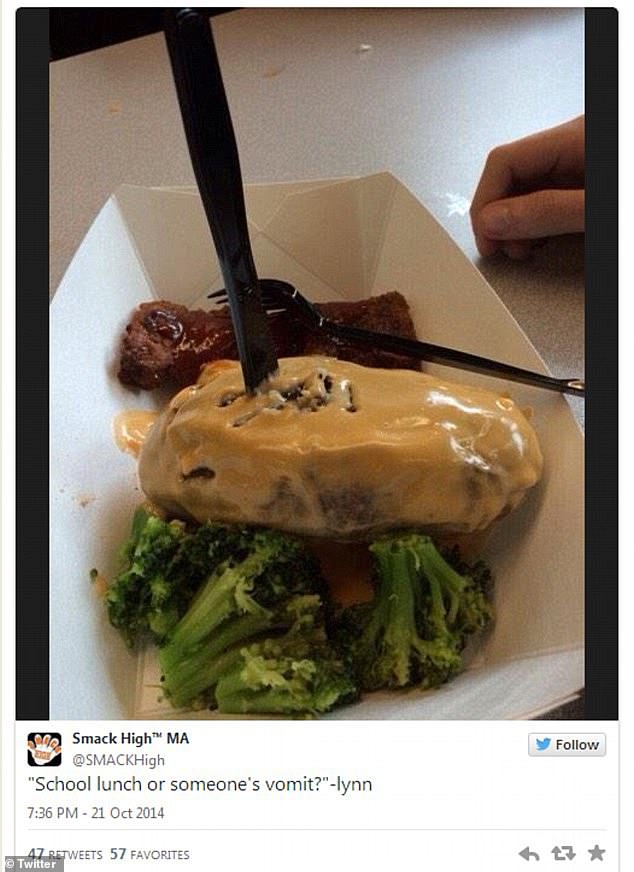 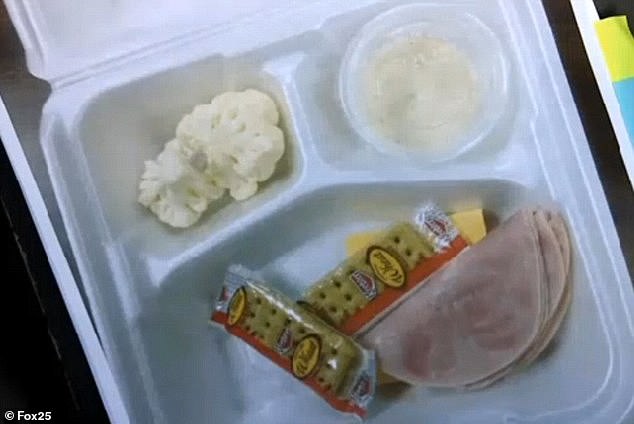 The image above shows a school lunch from 2014. Local districts were unhappy with the requirements put in place and opted not to serve the food 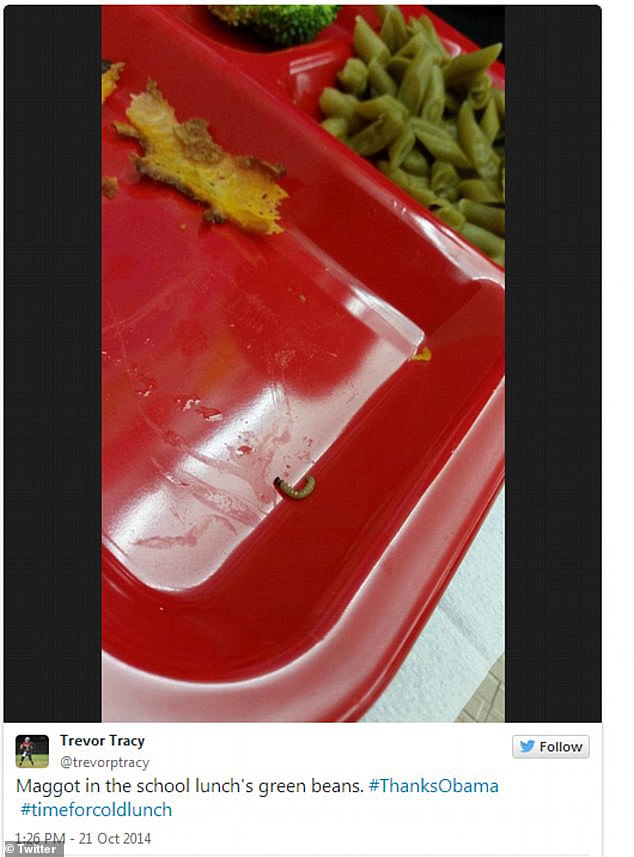 In January, Admiral Dr Ronny Jackson, the White House physician who also served Barack Obama, examined the president and declared Trump to be in ‘excellent health’.

Despite his bill of good health, Jackson advised the president to improve his diet and exercise. 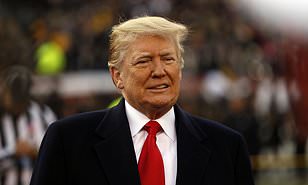 Do you think President Trump is right to roll back Michelle Obama’s school lunch regulations?

One pound heavier at the same height and Trump would be categorized as obese.

Under the new rules introduced by the Trump administration, the U.S. school lunch program is making room on menus again for noodles, biscuits, tortillas and other foods made mostly of refined grains.

The U.S. Department of Agriculture said Thursday only half the grains served will need to be whole grains, a change it said will do away with the current bureaucracy of requiring schools to obtain special waivers to serve select refined grains foods.

Previously, only fat-free milk could be flavored, although that rule had also been temporarily waived.

A final goal for limiting sodium will be scrapped as well, but schools will still be required to meet reduced sodium targets.

The School Nutrition Association, which represents local cafeteria operators and companies like Domino’s Pizza, Kellogg and PepsiCo, had called for relaxing the whole grain-only requirement, saying it was too difficult for some districts to meet.

Diane Pratt-Heavner, a spokeswoman for the association, said whole-grain bread and buns generally aren’t a problem.

But she said students complained about other items, in many cases because of cultural or regional preferences.

‘I had a salad bar in HS before the Michelle [sic] Obama’s plan went mainstream! Our food literally turned to crap afterwards,’ tweeted Hunter Mayberry 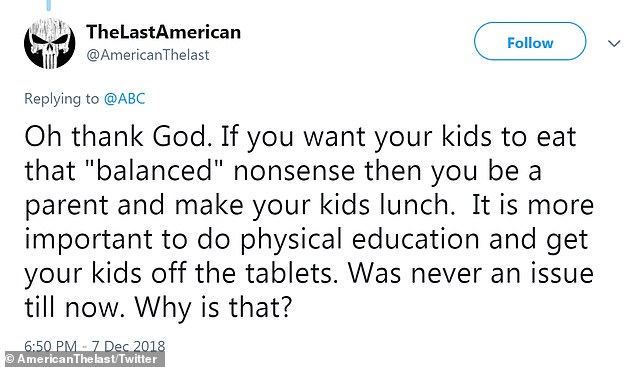 ‘Oh thank God,’ tweeted one Twitter user. ‘If you want your kids to eat that “balanced” nonsense then you be a parent and make your kids lunch. It is more important to do physical education and get your kids off the tablets. Was never an issue til now. Why is that?’

Not everyone welcomed the relaxed rules.

The American Heart Association encouraged schools to ‘stay the course’ and commit to meeting the stricter standards that started going into effect in 2012.

The Center for Science in the Public Interest also said the decision to roll back the whole-grain requirement makes no sense because most schools were already in compliance.

Those still struggling to meet the standard would have eventually been able to comply as well, said Colin Schwartz, the center’s deputy director of legislative affairs.

For the current school year, the USDA said 20 percent of schools were applying for exemptions to the whole-grain rule.

Pasta, tortillas, biscuits and grits were the most commonly requested items for exemption, it said. 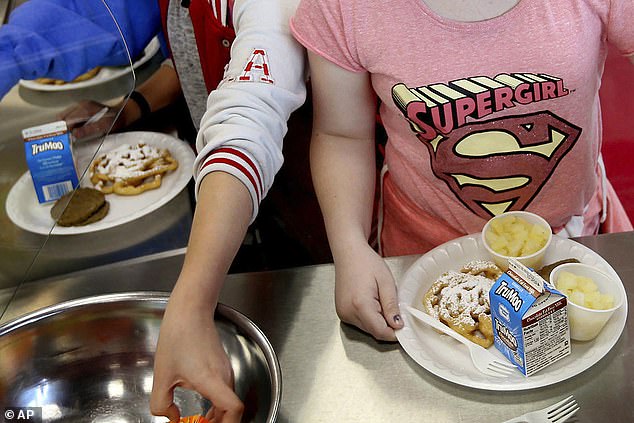 The photo above shows students line up for lunch at a middle school in Sandy, Utah on May 19, 2017

The USDA school lunch program provides low-cost or free lunches in public schools and other institutions.

Brandon Lipps, deputy undersecretary for the USDA’s food and nutrition division, said that at some schools that only serve whole grain foods, some is wasted if students won’t eat it.

In those cases, schools might now consider other options, Lipps said.

Reaction on social media was divided. Some said that Michelle Obama’s reforms did not succeed, while others say they were necessary.

‘I had a salad bar in HS before the Michelle [sic] Obama’s plan went mainstream! Our food literally turned to crap afterwards,’ tweeted Hunter Mayberry.

‘Oh thank God,’ tweeted one Twitter user. ‘If you want your kids to eat that “balanced” nonsense then you be a parent and make your kids lunch.

‘It is more important to do physical education and get your kids off the tablets. Was never an issue til now. Why is that?’

U.S. CHILDHOOD OBESITY RATES ARE ON THE RISE AGAIN 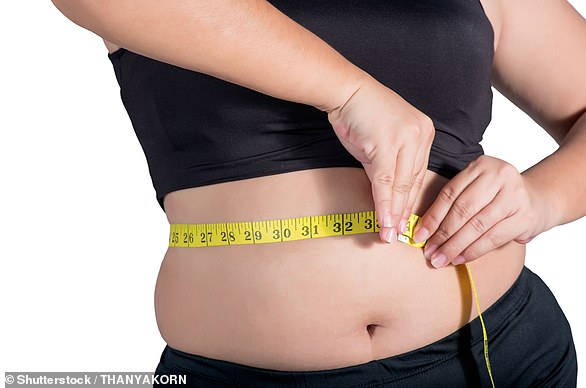 Childhood obesity is a growing problem in the U.S., according to two new studies that suggest some recent reports of progress may have been incorrect, or that a downturn was fleeting at best.

Just four years ago, the U.S. Centers for Disease Control and Prevention announced that childhood obesity rates had leveled off and touted a dramatic 43 percent decline in obesity among kids ages 2 to 5 years during a 10-year period ending in 2012.

Now, however, it appears that childhood obesity has been steadily climbing for both boys and girls since 1999, researchers report in Pediatrics.

More recently, there has also been a sharp increase in severe obesity among kids 2 to 5 years old.

‘Obesity is not going away, and all kids are still at risk,’ said lead author Asheley Cockrell Skinner of Duke University in Durham, North Carolina.

‘This is not surprising, necessarily, but it is disheartening,’ Skinner said by email.

‘It tells us that our efforts to improve the health of children are not reaching across the country.’

Skinner and colleagues examined data from the CDC’s National Health and Nutrition Examination Survey (NHANES), looking at data on children’s height and weight collected in two-year cycles starting with 1999-2000 and continuing through 2015-2016.

Overall, roughly 29 percent of kids were overweight and another 20 percent were obese at the start of the study.

By the end, about 35 percent of children were overweight and another 26 percent were obese.

Obesity and severe obesity also increased sharply for kids ages 2 to 5 and for teen girls ages 16 to 19 in 2015-2016, compared to the previous two-year survey cycle.

White and Asian American children had significantly lower rates of obesity than kids of other racial and ethnic groups, including African American and Hispanic children, the study also found.

A separate study in Pediatrics focused only on the 2.1 percent of children ages 2 to 5 with severe obesity and found these kids were more likely to be from racial or ethnic minority groups.

Compared with white children, Hispanic kids this age were more than twice as likely to be obese, and African American kids had 70 percent higher odds, this study found.

Young children also had at least twice the odds of obesity when they were poor or had parents who were single or had limited education. Children who weren’t breastfed were 50 percent more likely to be obese, the study also found.

Kids who were severely obese also had twice the odds of spending four or more hours a day in front of screens, compared to non-obese children.