A winter storm sweeping across much of the Midwest and East Coast is dumping snow, sleet and freezing rain on 39 states and has already led to 2,200 flights being canceled across the country.

Snow fell in New York City, and schools in several parts of the U.S. closed amid predictions for messy afternoon commutes. Philadelphia closed city offices as of 1pm and put a ‘code blue’ into effect, putting extra teams out to encourage homeless people to get into shelters.

New Jersey’s governor declared a state of emergency with up to four inches of snow expected before turning to rain Wednesday night. State and local government offices in Delaware closed early.

Nationwide, more than 2,200 flights were canceled and more than 4,700 were delayed, according to the flight-tracking website FlightAware.

A sprawling storm closed schools, snarled travel and threatened homeless people Wednesday with snow and cold stretching from the Midwest to the East Coast. Pictured above is New York’s Central Park on Wednesday afternoon 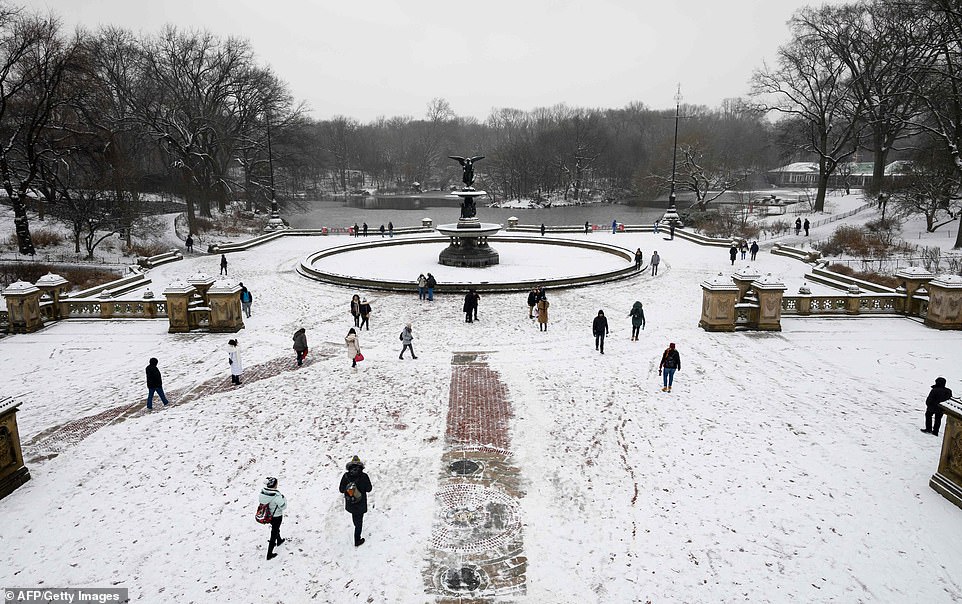 Snow fell in New York City (pictured above), and schools in several parts of the U.S. closed amid predictions for messy afternoon commutes on Wednesday 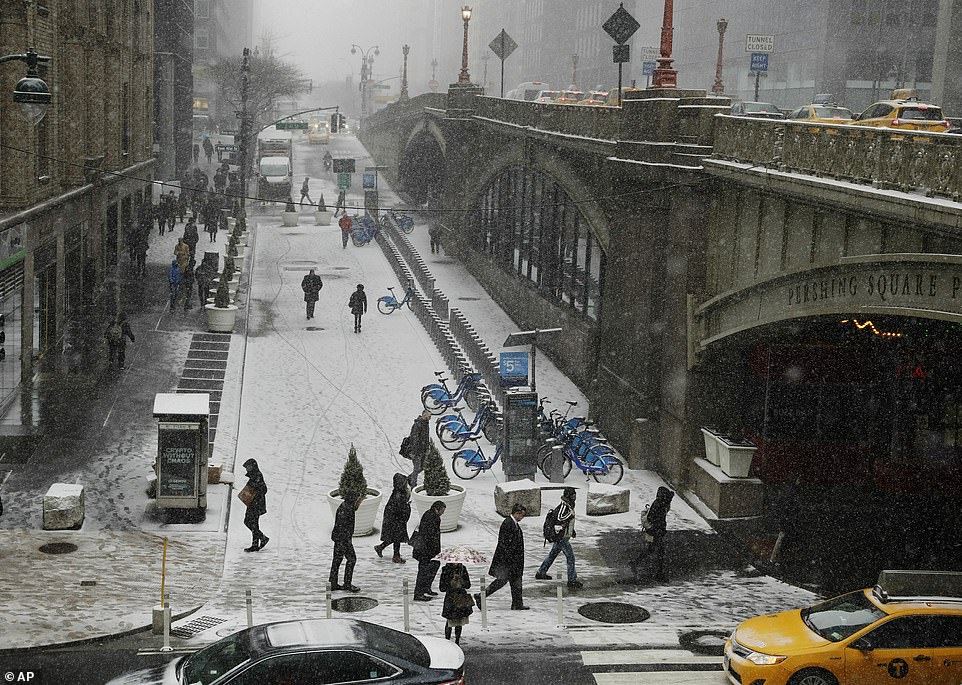 Snow began falling in New York City (above) on Wednesday, and schools in several parts of the U.S. are closing or delaying their starts amid predictions for storms and messy afternoon commutes 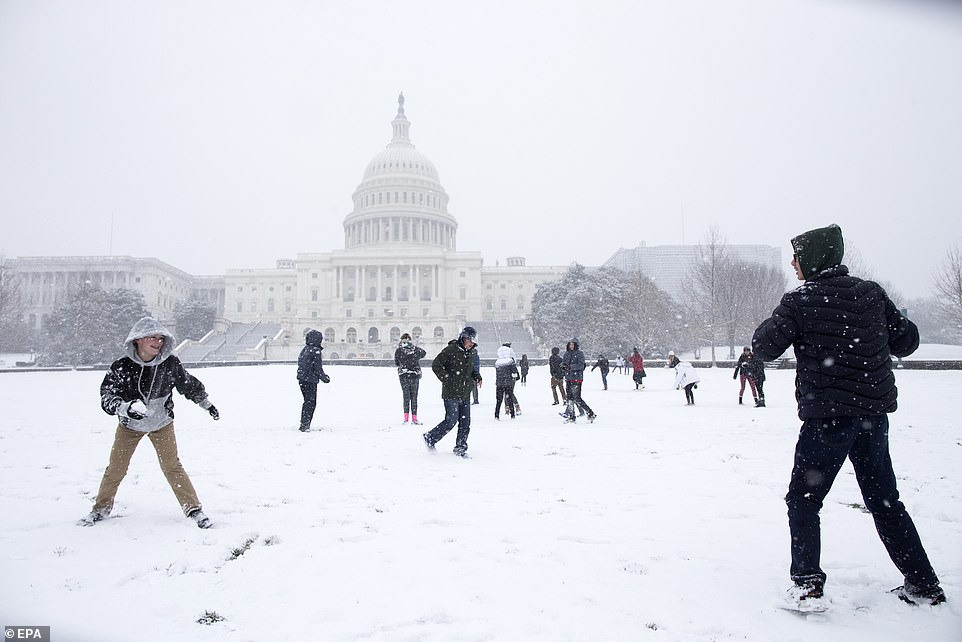 Snow, sleet and freezing rain is set to hit the Midwest and Northeast on Wednesday as a winter storm bears down. Pictured is Washington D.C. on Wednesday morning where two inches of snow had already fallen 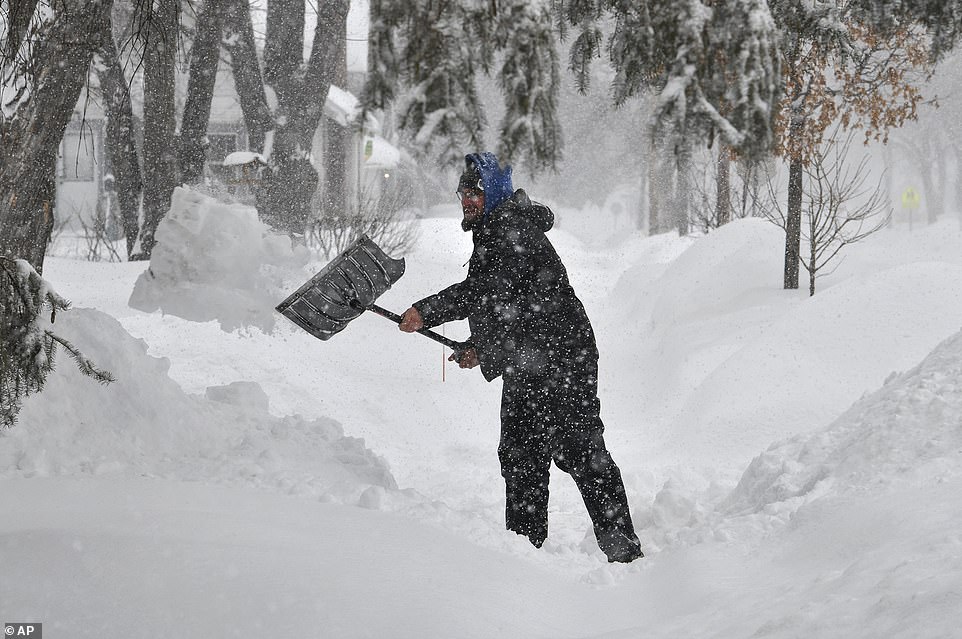 The storm reached from northern Minnesota down through Missouri and east into the Mid-Atlantic region.

The Central Plains was hit with snow overnight but Detroit, Chicago, Philadelphia, New York and D.C. was expected to get the worst of it later on Wednesday.

The widespread weather system piled as much as 6 inches of snow across the Washington area before turning to sleet.

As much as 7 inches of white powder blanketed the south-central Pennsylvania borough of Greencastle.

The snow is forecast to turn to freezing rain and then rain before the end of the day.

By evening, the winter storm was set to move into the Boston area, where it is expected to leave just 2 inches overnight before tapering off by the morning commute.

The storm forced the closing of federal agencies in Washington as well as schools in Philadelphia, Baltimore and Washington.

Farther west, snow forced Minneapolis and St. Paul schools and scores of other districts in Minnesota and Wisconsin to cancel classes as up to 10 inches of snow fell on the region.

Schools, businesses and government offices in Kansas closed or announced plans to start late. Several school districts closed in Missouri, where officials said many roads across the northern half of the state were partially or completely snow covered.

In the Midwest, Omaha, Nebraska was hit with up to five inches of snow early Wednesday and Sioux Falls, South Dakota had experienced more than 6 inches. 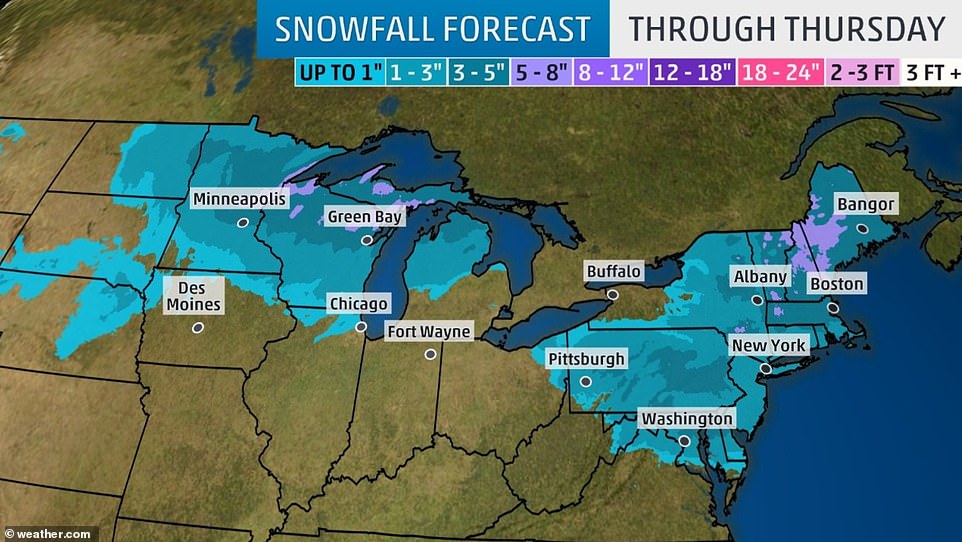 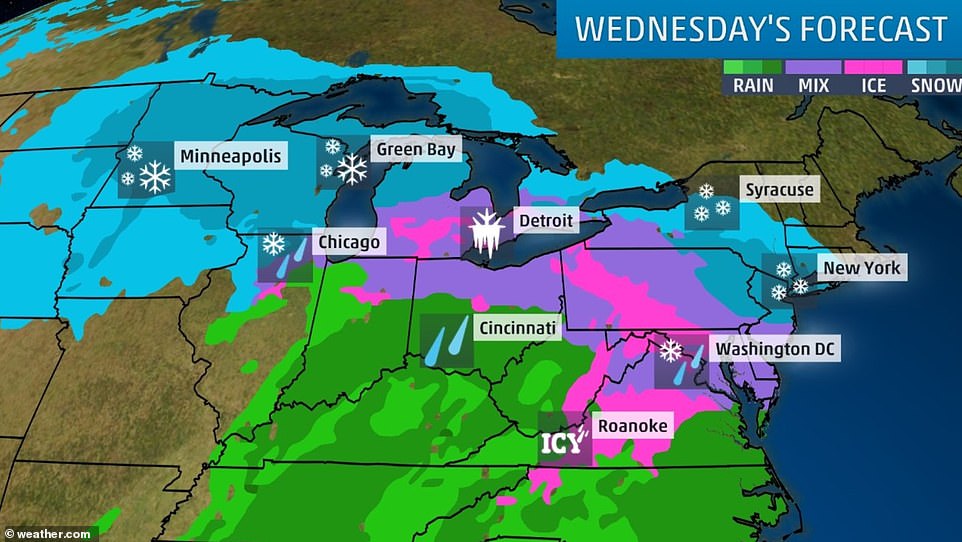 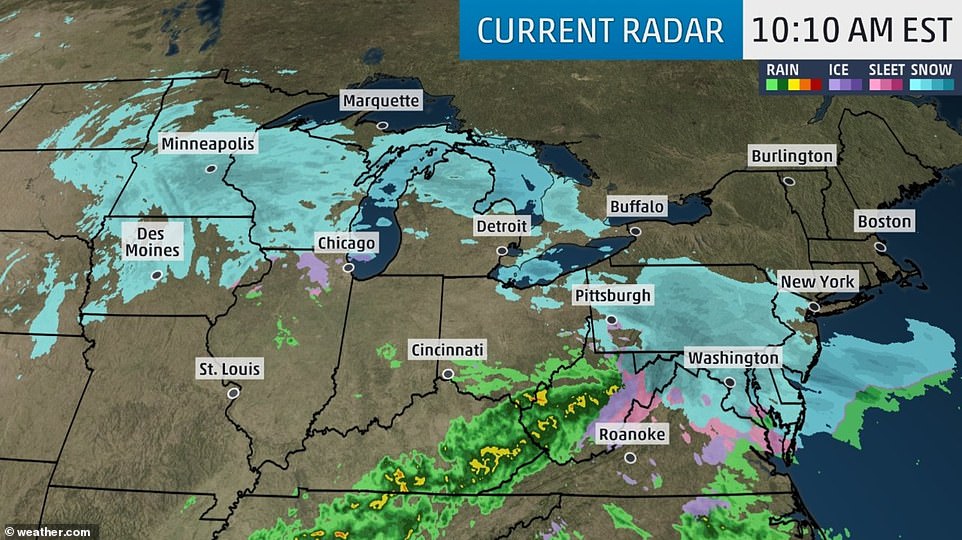 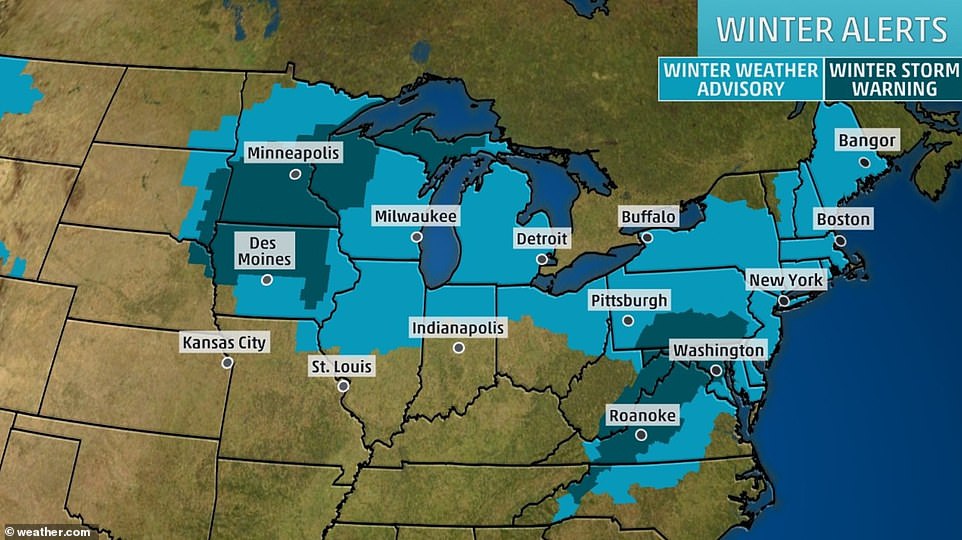 Nationwide, more than 2,200 flights were canceled and more than 4,700 were delayed, according to the flight-tracking website FlightAware.

The mid-Atlantic region was especially hard hit as airlines pulled flights ahead of the storm. Washington’s Reagan National Airport led the pack Wednesday morning, with 37 percent of departures and 33 percent of arrivals canceled.

Airports told passengers on social media to check their airlines for delays and cancellations.

Heavy flooding rains falling on much of the Deep South on Tuesday night were expected to change over to ice and snow as the system hits the mid-Atlantic and Northeast on Wednesday.

The storm is expected to affect parts of 39 states, and roughly 60 percent of the country’s population is in its path.

A ‘potent and cold’ low pressure system was expected to drop up to 3 inches (8 centimeters) of snow on the outskirts of Las Vegas starting Wednesday night and continuing into Friday morning, the National Weather Service said.

Heavy snow was predicted for northern Arizona and significant rain for central Arizona deserts through Friday. 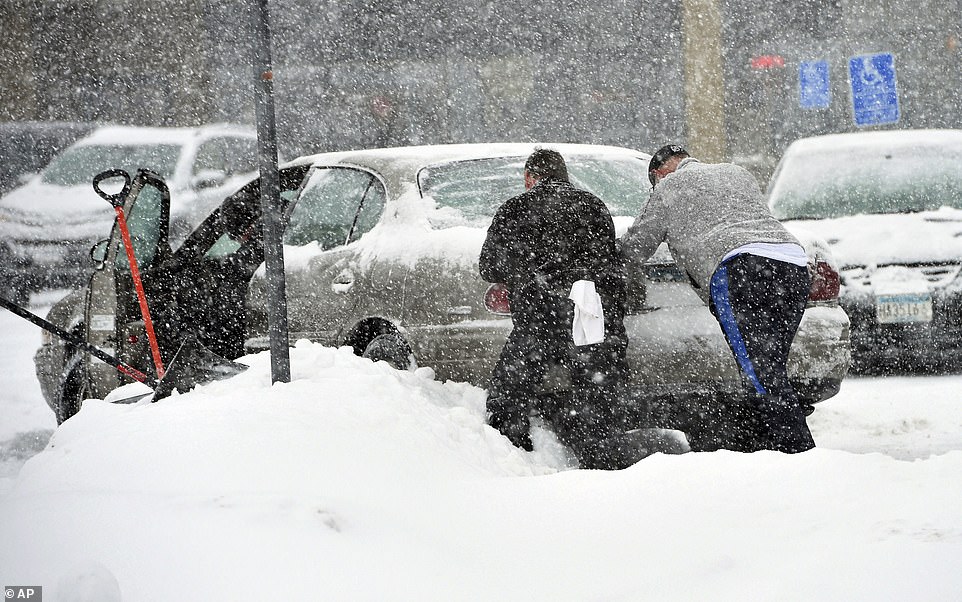 Three men try to dig out a stuck car as more snow falls in St. Paul, Minnesota on Wednesday 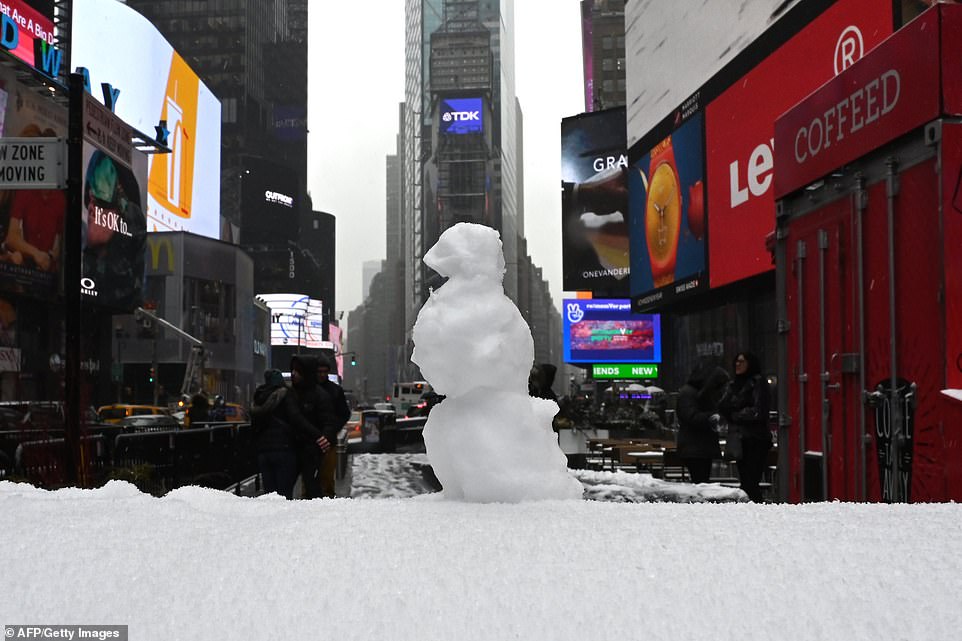 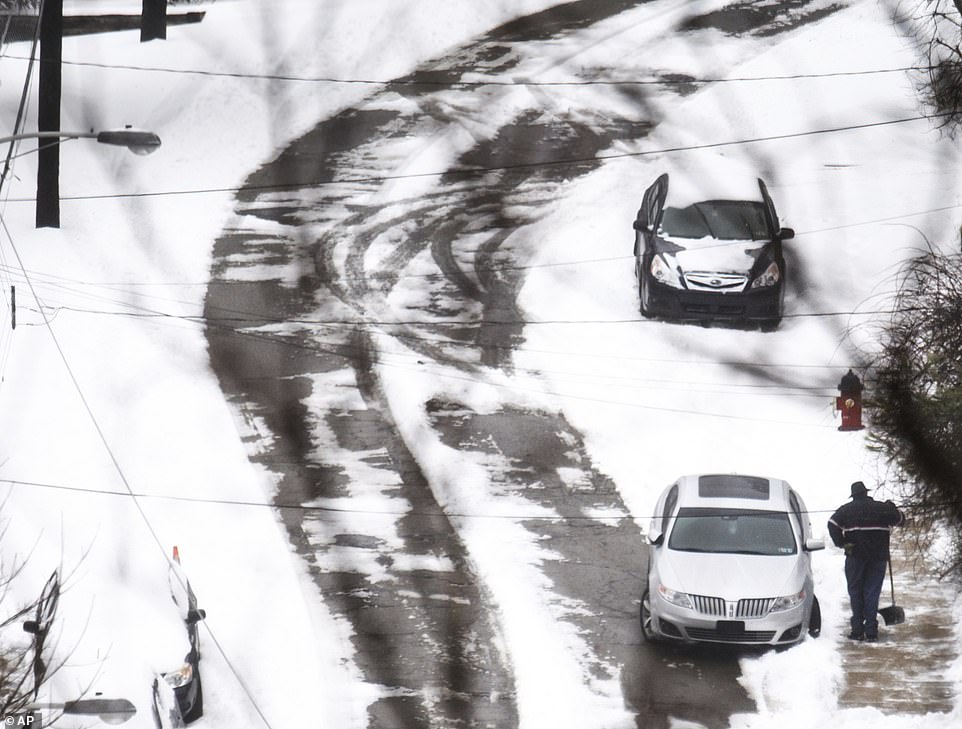 A person shovels in the Lincoln-Lemington-Belmar neighborhood in Pittsburgh, Pa on Wednesday. As much as 7 inches of white powder blanketed the south-central Pennsylvania area 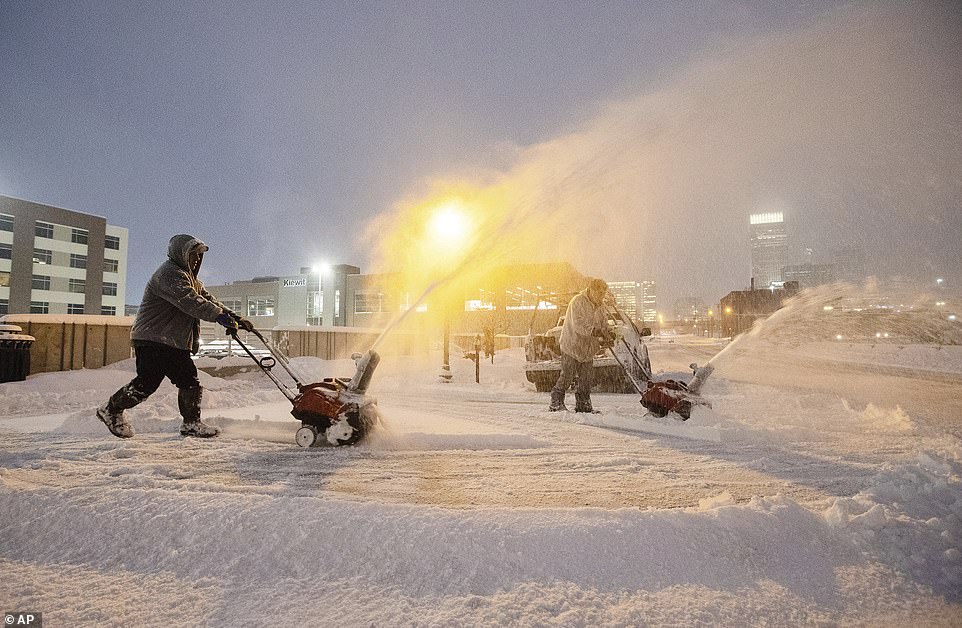 In the Midwest, Omaha, Nebraska (above) was hit with five inches of snow early Wednesday 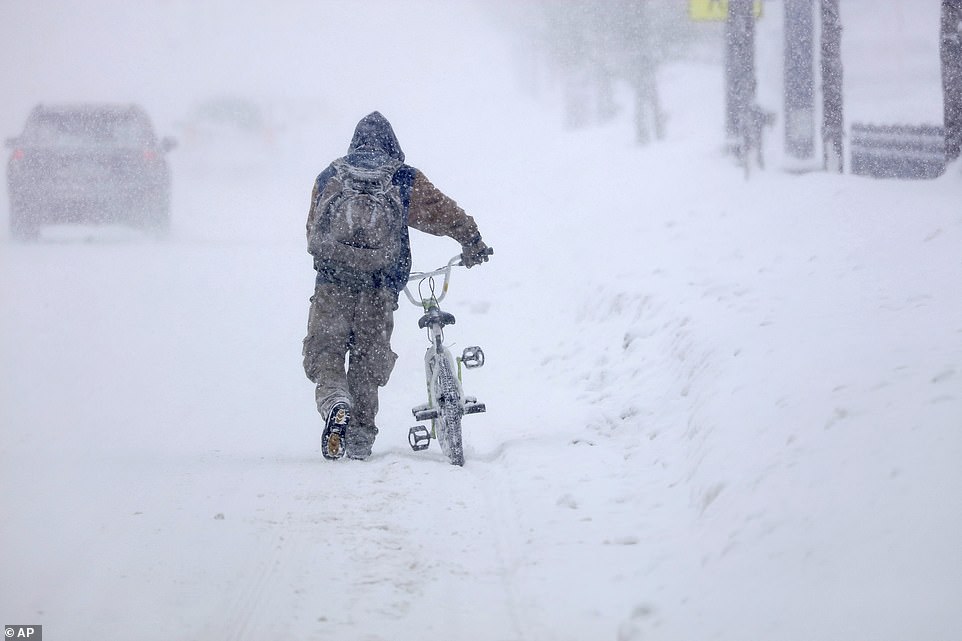 Austin Tauber heads home with his bicycle on Wednesday in the snow in Anoka, Minnesota 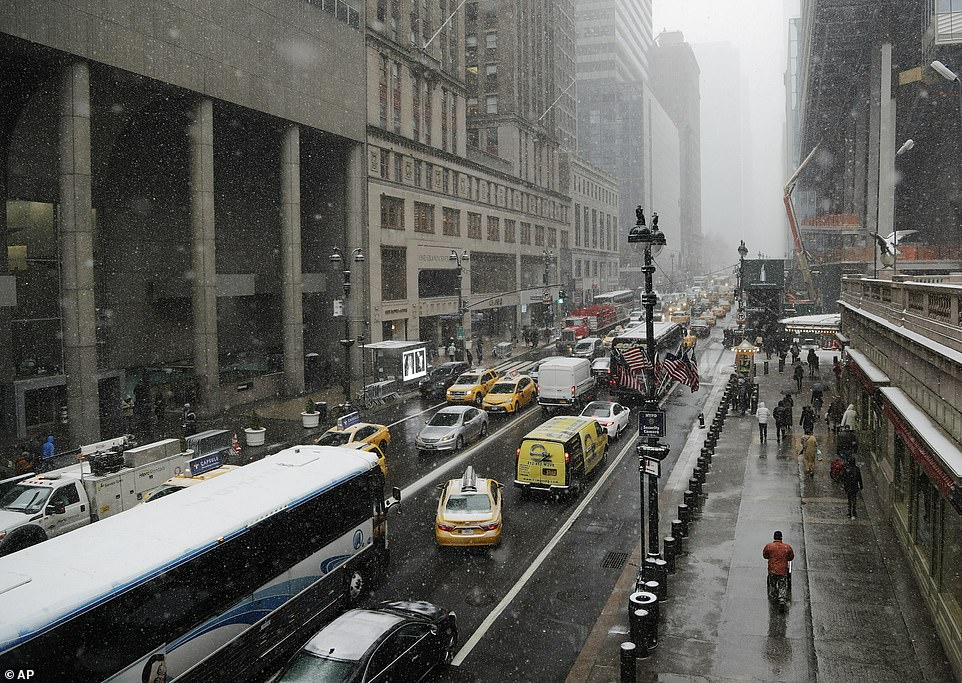 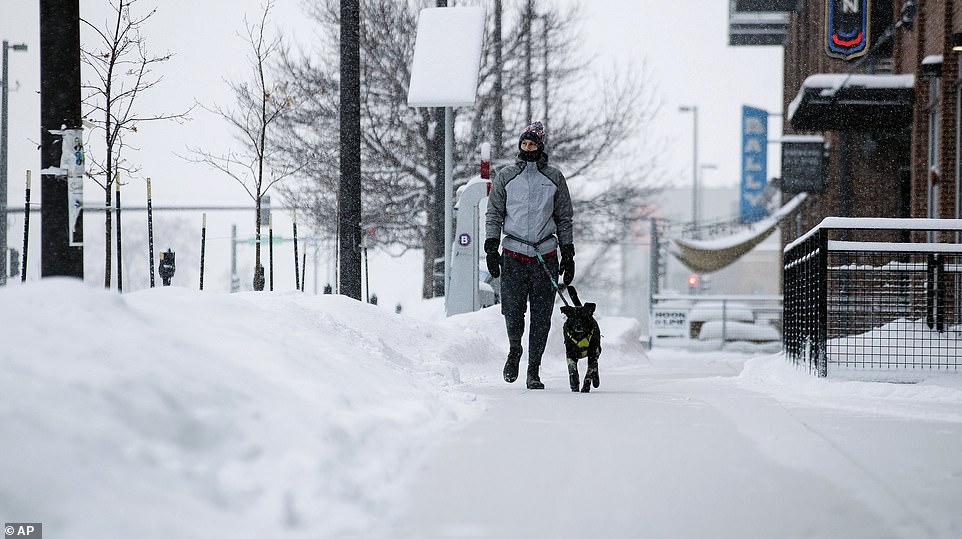 Amir Begovic walk his dog Garo in a fresh coating of snow after the winter storm on Wednesday in Omaha, Nebraska 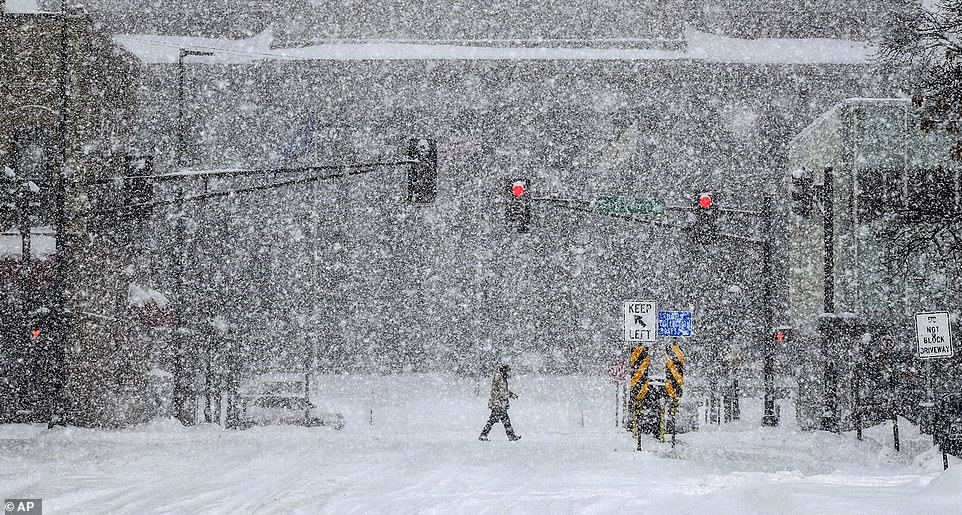 A pedestrian crosses the street near the Stearns County Courthouse as heavy snow falls on Wednesday morning in St. Cloud, Minnesota 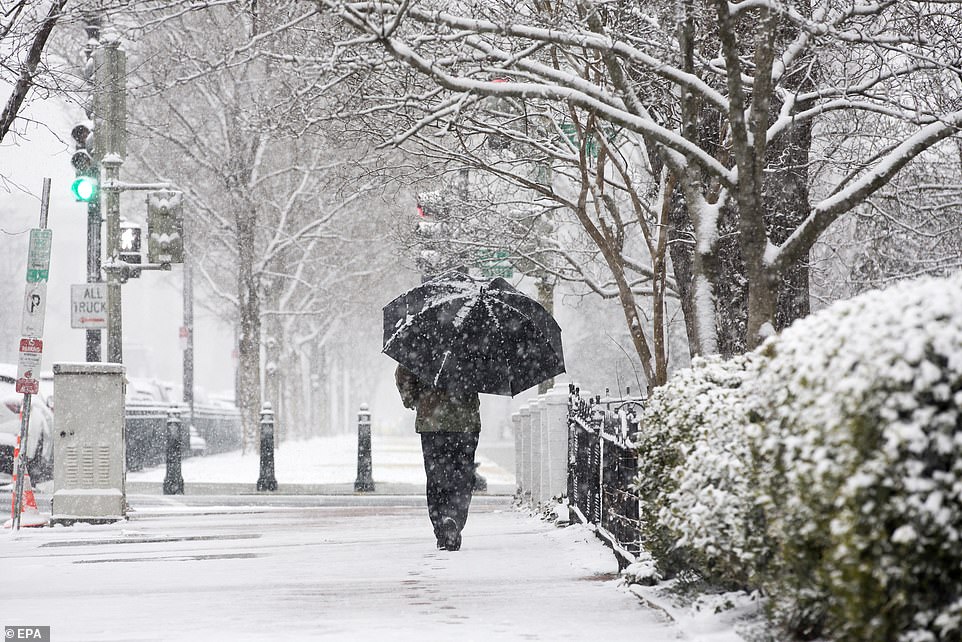 A pedestrian carries an umbrella during a snowstorm on Capitol Hill in Washington D.C. on Wednesday 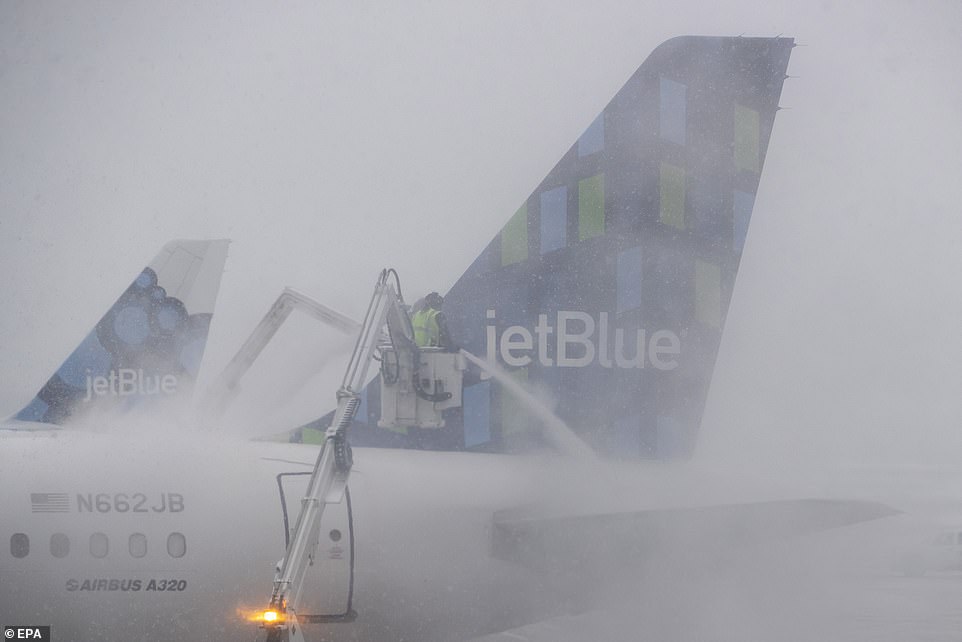 Workers de-ice a jetBlue airplane as flight operations continue in the snow at Reagan-National Airport during a winter storm in Arlington, Virginia on Wednesday 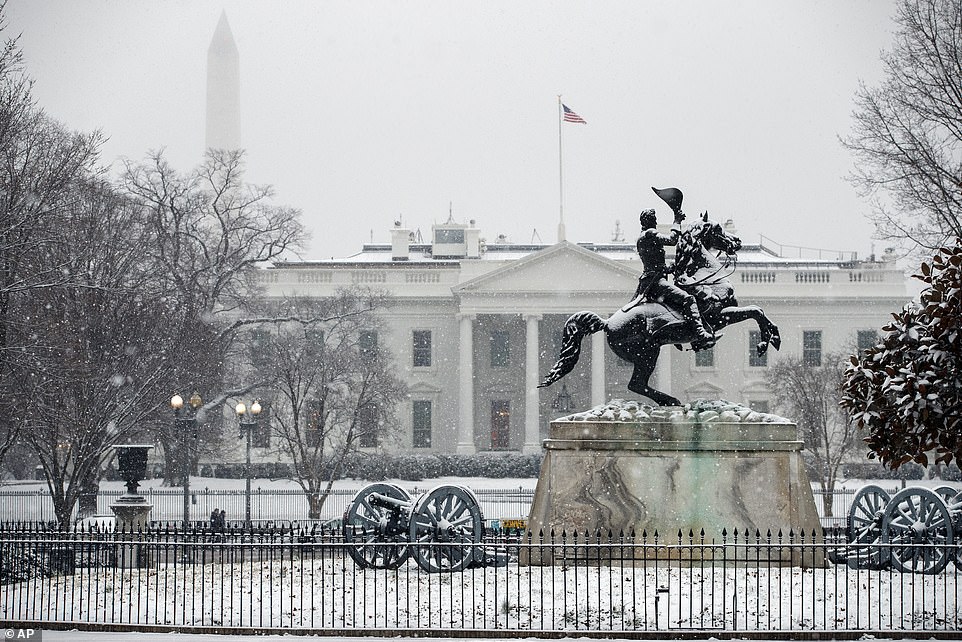 Snow falls on the White House during Wednesday’s winter storm. D.C. is expected to get between two to four inches of snow