A science teacher has revealed exactly how much sugar is in the soft drinks being sold to school children around Australia.

Jacob Strickling, who teaches at Green Point Christian College on the Central Coast of New South Wales, made the startling video to make parents aware of the amount of sugar in canteen fizzy drinks.

After evaporating an entire  600ml bottle of Berts Creaming Soda on a Bunsen burner, he discovered that kids were gulping down a whopping 50 grams of sugar.

The video shows Mr Strickling pouring out the drink into a glass tumbler before placing it on a Bunsen burner that evaporates the drink for well over two hours.

The vibrant red colour morphs into a thick, black, tar-like substance that bubbles and puffs as if its lava.

After the flame is turned off, what is left behind is almost a full tumbler of carbonized sugar.

HOW MUCH SUGAR IS IN AUSTRALIA’S MOST POPULAR SOFT DRINKS?

The toffee is then measured out and the shocking discovery was made.

‘By using the before and after weights, I was able to determine that there was at least 50 grams of sugar in the 600 ml drink.’ Mr Strickling told Newsflare.

To put it into perspective, Mr Strickling weighed 50 grams of white sugar and poured it into the bottle to show just how much sugar kids are gulping down.

The current dietary requirements in New South Wales outline that school canteens should promote healthy eating and good nutrition to their students.

Milkshakes, smoothies, juices and Slushies can be sold, but sugary drinks such as Coca Cola, Fanta and Sprite are not allowed.

Although considered a ‘sugary drink’, some Australian brands such as Bert’s and Schweppes are still sold in schools around the country. 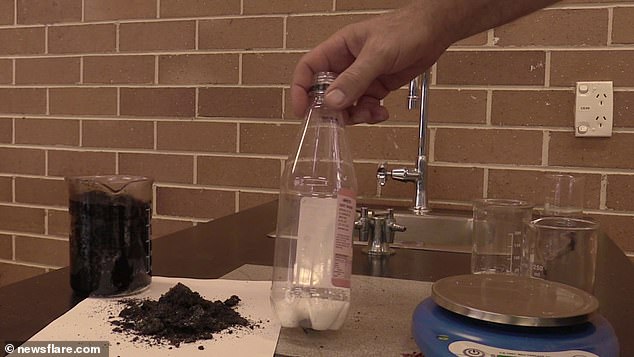