Scientists add 12,000 new species to the list of Earth’s bacteria

Over 12,000 new species of bacteria and archaea have been added – increasing the known population diversity of the microscopic creatures by 44 peer cent.

Researchers from the US Department of Energy Joint Genome Institute and others worked to decipher environmental DNA samples to identify individual species.

The work involved examining 52,000 samples of DNA taken from oceans, soil, animals and people that contained a mixed up jumble of bacterial DNA.

The team were able to pull out and reconstruct the DNA of 12,000 single species from this mixed up genetic soup and increase the diversity of known species from about 27,000 to just over 40,000 known and named species today.

The findings could lead to new proteins discovered within the bacteria that may end up being a resource in the future with further study, according to the research team. 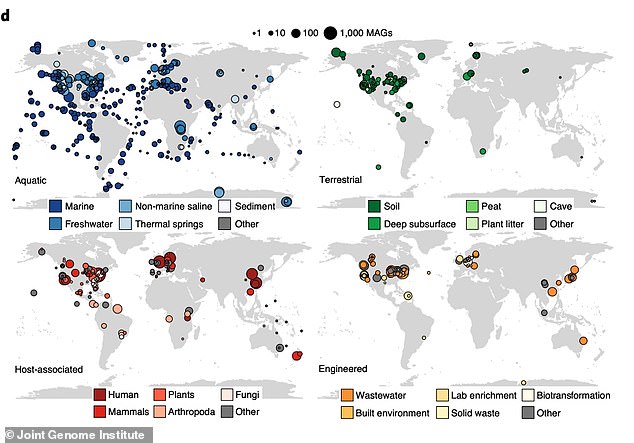 They took samples from a range of different environments around the world including humans, plants, fungi, waste, caves, soil, marine environments and built up environments

Researchers were also able to identify likely host bacteria for viruses that scientists have so far been unable to grow in the lab – leading to hope for new treatments.

The original resource of 52,515 samples was the largest effort to date to capture the breadth of bacterial and archaeal genomic diversity across Earth’s biomes.

Known as the GEM catalog, the work ‘considerably expands the known diversity of bacteria and archaea’ found throughout the world.

‘We hope these new genomes will shed light on the role these organisms play in their natural environments.

‘With this ever-growing catalog of diversity, we hope to enable the research community to make discoveries that range from the more efficient production of biofuels and bioproducts to sustainable agricultural practices, bioremediation strategies, and new human health advances.’

However, despite a dramatic spike in the number of known species of bacteria, the team didn’t find any new deep-branching lineages or phyla – just new species within existing and already known families.

‘This was a bit surprising given the scale and environmental diversity of our dataset,’ Dr Eloe-Fadrosh told MailOnline.

‘This suggests that most phyla have broad environmental distributions and were previously sequenced in earlier, smaller-scale studies.

‘Of course, we cannot rule out that new methodological approaches in the future will uncover new microbial diversity missed by our approach.’ 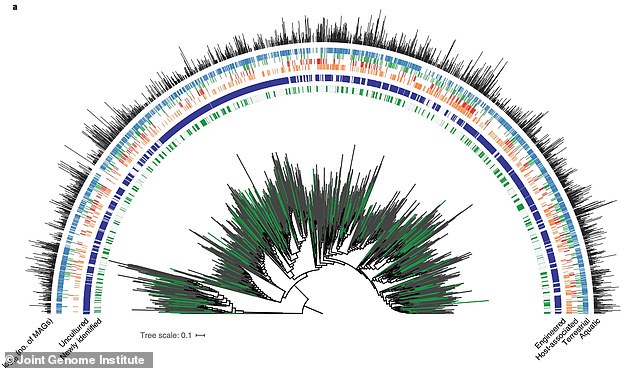 ‘Many of the environmental biomes yielded a lot of new diversity – including samples from freshwater lakes, seawater, soils, and the deep subsurface,’ Dr Eloe-Fadrosh told MailOnline.

According to the research team, despite a 3.6-fold increase in genetic material recovered directly from the environment – over two-thirds still lack a mappable reference genome – so there could be many more species out there.

‘Thus, continued efforts to capture the genomes of new species- and strain-level representatives will further improve resolution,’ the authors wrote.

The GEM catalog, like others of its type, have a number of limitations, including undetected contaminations that could skew results.

Although these catalogs are important placeholders for many new candidate species, researchers expect many will be replaced in the future by higher quality versions, or ultimately by genome sequences from cell clones.

‘We anticipate that the GEM catalog will become a valuable resource for future metabolic and genome-centric data mining and experimental validation.’

Large-scale genomic inventories, like this catalog, provide critical resources to the broader research community as genomic details of bacteria can be used in medicine, general scientific research and to find new proteins.

The findings have been published in the journal Nature Biotechnology.