Scientists are developing a train car that can remove 3,000 tonnes of CO2 from the air per year

Taking the train can be a great way to cut your emissions compared to travelling in a car or boarding a flight.

But as it stands, train travel isn’t carbon neutral, with journeys accounting for 0.4 ounces (14 grams) of carbon dioxide (CO2) per passenger mile.

However, that could be set to change with a new train that actively removes CO2 from the air as it moves.

A US-based startup called CO2Rail Company has been working with engineers at the University of Sheffield and University of Toronto to develop huge vents that take in air while the train moves.

The CO2 can then be separated from the air, converted to a liquid and stored within the carriage until it can be emptied.

The researchers believe this is a more cost efficient than other direct air capture (DAC) solutions, as the carriages can be retrofitted to trains already in service.

They claim that each car could remove up to 3,000 tonnes of carbon dioxide per year in the near term. 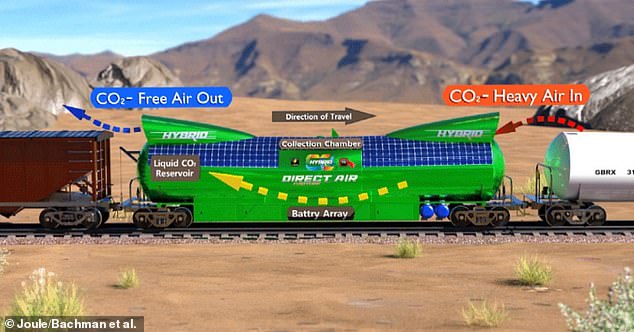 Schematic of a Rail DAC car. Air passes through intakes extending up into the slipstream of the moving train, through DAC contactors mounted within the cylindrical collection chamber. Captured CO2 is liquefied, stored, and then off-loaded at stations during crew change or fuelling stops. Solar panels and the regenerative braking system charge a large battery array contained in the undercarriage and power the processes

HOW DOES THE TRAIN CARRIAGE WORK?

As a train fitted with a CO2Rail car moves, the air that extends up into the slipstream pushes ambient air into a cylindrical CO2 collection chamber.

The air is then moved through a chemical process that separates its CO2, before the CO2-free air travels out the back or underside of the car and into the atmosphere.

After a sufficient amount of CO2 has been captured in the collection chamber, it is concentrated and stored in a liquid reservoir.

The liquid can be emptied from the train at a crew change or fuelling stop to be transported into the circular carbon economy or to nearby geological landfill sites.

Professor Peter Styring, Director of the UK Centre for Carbon Dioxide Utilisation at the University of Sheffield and co-author of the research, said: ‘The direct capture of carbon dioxide from the environment is increasingly becoming an urgent necessity to mitigate the worst effects of climate change.

‘The technology will harvest meaningful quantities of CO2 at far lower costs and has the potential to reach annual productivity of 0.45 gigatons by 2030, 2.9 gigatons by 2050, and 7.8 gigatons by 2075 with each car having an annual capacity of 3,000 tonnes of CO2 in the near term.’

In a paper published today in Joule, the researchers outline the design for the CO2Rail carriages.

They are an example of a DAC technology, that removes carbon dioxide from the air and compresses it for storage or utilisation purposes.

As a train fitted with a CO2Rail car moves, the air that extends up into the slipstream pushes ambient air into a cylindrical CO2 collection chamber.

The air is then moved through a chemical process that separates its CO2, before the CO2-free air travels out the back or underside of the car and into the atmosphere.

After a sufficient amount of CO2 has been captured in the collection chamber, it is concentrated and stored in a liquid reservoir.

The liquid can be emptied from the train at a crew change or fuelling stop to be transported into the circular carbon economy or to nearby geological landfill sites. 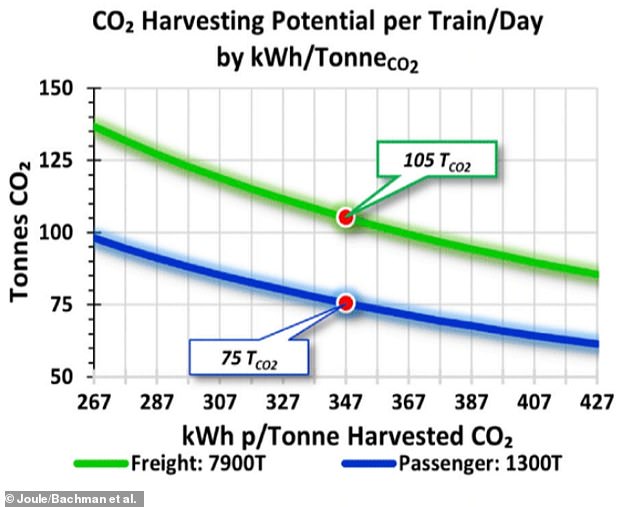 Each of the processes inside the CO2Rail car are powered exclusively by onboard solar panels, or by energy generated from the regenerative braking system.

When regenerative brakes are applied, the current in the electric motors is reversed and begins converting the vehicle’s forward momentum into electrical energy.

On current electric trains, this energy is dissipated in the form of heat and discharged out of the top of the locomotive during every braking manoeuvre.

‘Every complete braking manoeuvre generates enough energy to power 20 average homes for a day, so we’re not talking about a trivial amount of energy.

‘Multiply this by every stop or deceleration for nearly every train in the world and you have about 105 times more energy than the Hoover Dam produces within that same period, and that was a hydro-electric construction project that took six years and cost $760 million (£634 million) in today’s dollars.’

The researchers say that an average freight train with these CO2Rail cars could remove up to 6,000 tonnes of carbon dioxide per year. 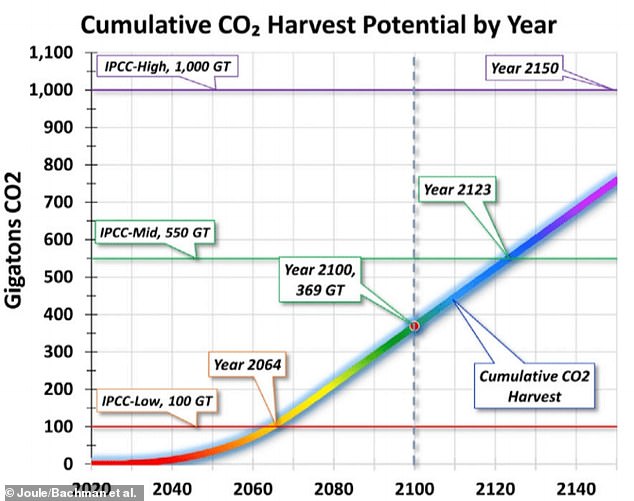 The researchers found each direct air capture car can harvest about 6,000 metric tons of carbon dioxide from the air per year and more as the technology develops. Moreover, since trains are capable of hosting multiple CO2Rail cars, each train will harvest a corresponding multiple of CO₂ tonnage

Stationary DAC facilities require large areas of land to house their equipment and construct the renewable energy sources required to support them.

Obtaining the permits to operate them can also be difficult, and many residents are opposed to the construction of these large facilities in their towns and cities.

Geoffrey Ozin, a carbon dioxide utilisation chemist from the University of Toronto and study co-author, said: ‘It’s a huge problem because most everybody wants to fix the climate crisis, but nobody wants to do it in their backyard,

‘Rail-based direct air capture cars would not require zoning or building permits and would be transient and generally unseen by the public.’

The stationary DAC technologies also use large, energy-intensive fans to move air into them for carbon sequestration.

The purpose-built train carriages eliminate the need for these as they use large vents to take in air as they move.

Each carriage can also be retrofitted onto existing rail systems, significantly reducing any potential set-up cost.

As its sustainable-energy needs are being supplied by on-board sources, the price per tonne is also significantly lower than that of other DAC systems.

‘The projected cost at scale is less than $50 (£42) per tonne, which makes the technology not only commercially feasible but commercially attractive,’ Bachman said. 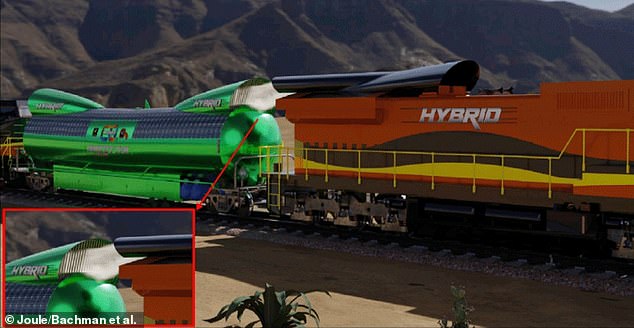 The researchers hope the technology could encourage more passengers to use railways, therefore creating a positive feedback loop of carbon removal.

Bachman added: ‘Imagine stepping onto a train each morning, seeing the CO2Rail cars attached, and knowing that your commute to work each day is actually helping to mitigate climate change.

‘It will work the same with freight, if there is a choice between rail and another mode of transportation, I think this technology will sway many shippers.

‘Rail is about five or six times more efficient than trucks. By increasing rail utilisation, you increase the efficiency of the entire transportation system.’

The team, which also includes researchers from Massachusetts Institute of Technology and Princeton, are working on a similar system that can remove the CO2 emissions from the exhaust of diesel-powered locomotives rather than electric.

With the growth of sustainably-sourced rail electrification systems, this point-source capability on diesel lines would make rail the world’s first carbon-neutral mode of large-scale transportation.

Startup draws carbon dioxide from the atmosphere to make DIAMONDS

It may seem like a thing of fantasy, but a luxury jewellery startup has created diamonds that are made from thin air.

Aether pulls carbon dioxide (CO2) out of the atmosphere to make its lab-grown gems, which are physically and chemically identical to those that are mined.

It bills them as carbon-negative diamonds by claiming to extract 20 tonnes of CO2 from the air for every one carat diamond sold.

That is what earned Aether the B Corp Certification as the first and only diamond producer with that title.

Its gems are unlike other lab-grown diamonds because these are produced from petrochemicals like methane.

Aether is now planning to use $18 million (£13.75 million) in funding to ramp up the production of its diamonds, including a wholesale program which has just launched. 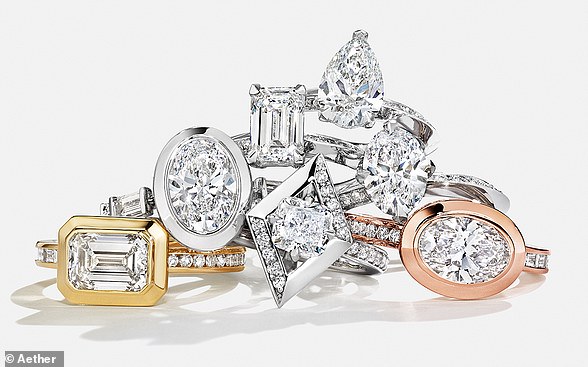 Barely believable: Aether has created diamonds that are made from the air (pictured) by pulling carbon dioxide out of the atmosphere