The world’s first octopus farm is set to open in Spain next year despite fierce opposition from the scientific community.

Conservation experts are calling for the project to be shut down amid concerns the ‘sentient’ animals can feel pain and emotions.

Some 350,000 tonnes of octopus are caught each year – more than 10 times the number in 1950 – with the animal particularly popular as a delicacy across Asia and the Mediterranean.

Demand is so high that companies worldwide have spent decades trying to uncover the secret of how to breed the octopus in captivity, because its larvae only eat live food and need a carefully controlled environment.

Now Spanish multinational company Nueva Pescanova has announced that it will start marketing farmed octopus next summer, to sell in 2023.

Controversy: The world’s first octopus farm is set to open in Spain next year despite fierce opposition from the scientific community (stock image)

Octopuses are believed to be highly intelligent, more so than any other kind of invertebrates; but their learning capability is still much debated among biologists.

The creatures have been known to break out of aquariums and into others in search of food, and they have even boarded fishing boats and opened holds to eat crabs stored inside.

They are the only invertebrate which has been shown to use tools, with some species, as pictured above right, retrieving discarded coconut shells and reassembling them to use as shelter.

In laboratory experiments they can be readily trained to distinguish between different shapes and patterns. In several widely contested studies, they have even been shown to practise observational learning.

In some countries, octopuses are on the list of experimental animals on which surgery may not be performed without anaesthesia. British animal testing laws regard them as ‘honorary vertebrates’, extending them protections not afforded to other invertebrates.

It has been suggested that the farm will produce 3,000 tonnes of octopus per year.

However, Nueva Pescanova has refused to reveal what conditions the octopuses will be kept in, including the size of the tanks, the food they will eat and how they will be killed.

Many scientists have reacted with dismay at the news, saying octopuses should never be commercially reared for food.

In a study by the London School of Economics and Political Science, experts said they were ‘convinced that high-welfare octopus farming was impossible’ and the government ‘could consider a ban on imported farmed octopus’ in future.

The research looked at more than 300 scientific studies and concluded that octopuses were ‘sentient beings’ that could experience pain, distress and harm as well as excitement and pleasure.

There is also no scientifically validated method for their humane slaughter, campaigners say.

A separate group of international group of researchers called for the Nueva Pescanova project to be scrapped because it is ‘ethically and ecologically unjustified’.

Compassion in World Farming (CIWF) has written to the governments of a number of countries – including Spain – urging them to ban octopus farming.

‘They are solitary, and very smart. So to put them in barren tanks with no cognitive stimulation, it’s wrong for them.’

She added that anybody who had seen the Oscar-winning documentary My Octopus Teacher, released on Netflix last year, would appreciate that.

The documentary follows a filmmaker who forges an unusual friendship with an octopus after going diving in a South African kelp forest.

From unlocking aquarium tanks to instantly camouflaging, octopuses are famous for engaging in complex behaviours.

In laboratory experiments they can be readily trained to distinguish between different shapes and patterns. 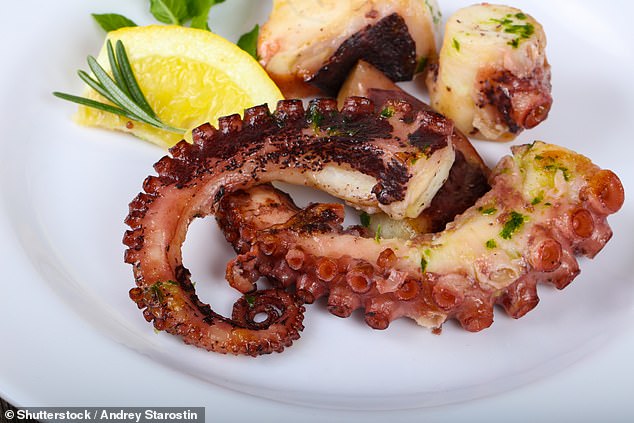 Some 350,000 tonnes of octopus are caught each year – more than 10 times the number in 1950 – with the animal particularly particular as a delicacy across Asia and the Mediterranean

Several widely contested studies also claim that they have been shown to practice observational learning.

They have even been observed using coconut and sea shells to hide and defend themselves.

However, they are also very territorial so scientists fear if there was more than one octopus in a tank they could try to eat each other.

If the octopus farm in Spain does get the go-ahead, creatures bred there would have little protection under European law.

That’s because EU law covering farm animal welfare is only applied to vertebrates, or creatures that have backbones.

On its website, Nueva Pescanova says that it is ‘firmly committed to aquaculture [farming seafood] as a method to reduce pressure on fishing grounds and ensure sustainable, safe, healthy, and controlled resources, complementing fishing.’

Despite this, evolutionary biologist Dr Jakob Vinther, from the University of Bristol, said octopuses were ‘extremely complex beings’.

‘I think as humans we need to respect that if we want to farm them or eat them,’ he added.