Scientists claim to have created the first ever synthetic tongue using 3D printing.

The ‘biometric tongue’, developed in the UK, mimics the elasticity, wettability and unique rough texture of a real human tongue with its synthetic silicone structure.

Experts took digital scans of real human tongues to 3D-print their artificial material, which could be used to test the oral processing properties of some foods.

It could also fight against adulteration in food and orally administered pharmaceuticals and lead to new nutritional technologies.

Pictured, the biometric tongue. The printed synthetic silicone structure mimics the topology, elasticity and wettability of a real tongue’s surface

‘We aimed to replicate these mechanically relevant characteristics of the human tongue in a surface that is easy to use in the lab to replicate oral processing conditions.’

This roughness, which makes our tongue feel like sandpaper when our mouth is dry, contrasts with the soft nature of the tongue’s tissue.

Together, this contrasts creates ‘a complicated landscape’ for materials scientists when trying to replicate a human tongue in the lab.

‘We focused our attention on the anterior dorsal section of the tongue where some of these papillae contain taste receptors, while many of them lack such receptors,’ said Dr Andablo-Reyes. 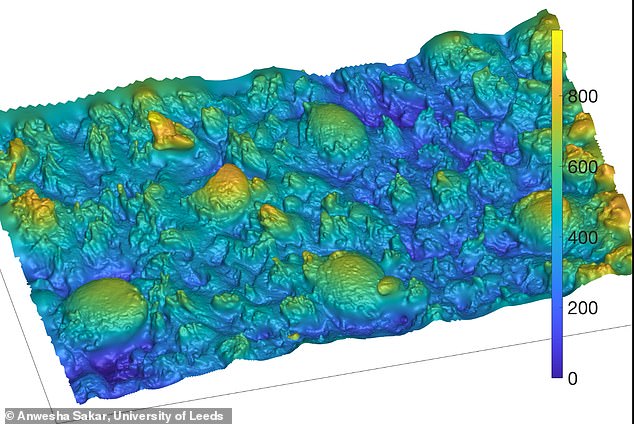 ‘Both kinds of papillae play a critical role in providing the right mechanical friction to aid food processing in the mouth with the adequate amount saliva, providing pleasurable mouthfeel perception and proper lubrication for swallowing.’

To make the tongue, the team took silicone impressions of tongue surfaces from 15 adults.

The impressions were 3D optically scanned to map papillae dimensions, density and the average roughness of the tongues.

The team used computer simulations and mathematical modelling to create a 3D-printed artificial surface to function as a mould.

The mould contained wells with the shape and dimensions of the different papillae randomly distributed across the surface.

This was replica-moulded against elastic polymers, each with optimised softness and wettability.

The artificial surface was then 3D printed using digital light processing technology based in the School of Mechanical Engineering at Leeds.

The team ran a series of experiments using different complex fluids to ensure that the printed surface’s wettability – how a liquid keeps contact and spreads across a surface – and the lubrication performance was the same as the human tongue. 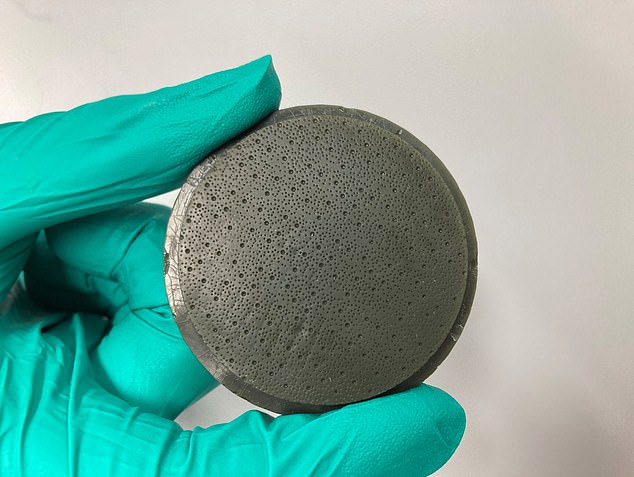 The 3D printed negative mould showing holes for the filiform and fungiform papillae – the small, nipple-like structures on the upper surface of the tongue

These factors are instrumental to how food or saliva interacts with the tongue, which in turn can affect mouthfeel, swallowing, speech and nutritional intake.

‘Accurately mapping and replicating the tongues surface and combining that with a material that approximates the elasticity of human tongue was no small task,’ said study author Anwesha Sarkar at the University of Leeds.

‘Harnessing expertise from multiple STEM disciplines, we’ve demonstrated the unprecedented capability of a 3D printed silicone surface to mimic the mechanical performance of the human tongue.

‘We believe that fabricating a synthetic surface with relevant properties that mimics the intricate architectural features, and more importantly the lubricating performance of the human tongue is paramount to gaining quantitative understanding of how fluids interact within the oral cavity.

‘This biomimetic tongue surface could also serve as a unique mechanical tool to help detect counterfeit in food and high-valued beverages based on textural attributes, which is a global concern and can help to ensure food safety.

“Ultimately, our hope is that the surface we have designed can be important in understanding how the biomechanics of the tongue underpin the fundamentals of human feeding and speech.’

It’s hoped the tongue material could eventually be used in screening newly designed products and accelerate development processes without needing to use costly and time-consuming human trials at early stages.

This is especially the case during the coronavirus pandemic when social distancing poses hurdles to sensory trials and consumer tests.

The study has been published in ACS Applied Materials & Interfaces.

First invented in the 1980s by Chuck Hull, an engineer and physicist, 3D printing technology – also called additive manufacturing – is the process of making an object by depositing material, one layer at a time.

Similarly to how an inkjet printer adds individual dots of ink to form an image, a 3D printer adds material where it is needed, based on a digital file.

Many conventional manufacturing processes involved cutting away excess materials to make a part, and this can lead to wastage of up to 30 pounds (13.6 kilograms) for every one pound of useful material, according to the Energy Department’s Oak Ridge National Laboratory in Tennessee.

By contrast, with some 3D printing processes about 98 per cent of the raw material is used in the finished part, and the method can be used to make small components using plastics and metal powders, with some experimenting with chocolate and other food, as well as biomaterials similar to human cells.

3D printers have been used to manufacture everything from prosthetic limbs to robots, and the process follows these basic steps:

· Preparing the printer, including refilling the raw materials such as plastics, metal powders and binding solutions.

· Initiating the printing process via the machine, which builds the object.

· 3D printing processes can vary, but material extrusion is the most common, and it works like a glue gun: the printing material is heated until it liquefies and is extruded through the print nozzle

· Using information from the digital file, the design is split into two-dimensional cross-sections so the printers knows where to put the material

· The polymer rapidly solidifies, bonding to the layer below before the build platform lowers and the print head adds another layer (depending on the object, the entire process can take anywhere from minutes to days.)

· After the printing is finished, every object requires some post-processing, ranging from unsticking the object from the build platform to removing support, to removing excess powders.