Scientists create a wheelchair that can be controlled with your MIND

Wheelchair that can be controlled with your MIND: Scientists create helmet that coverts brain waves into wheel movements

A mind-controlled wheelchair that translates brain signals into wheel movements brings hope to more than 5.4 million Americans with motor disabilities.

The technology, created by researchers at The University of Texas at Austin, includes a skullcap with 31 electrodes designed to detect signals in the brain region regulating movement and a laptop fixed on the wheelchair so the AI could translate the signals into wheel movements.

And all patients have to do is imagine they are moving their hands and feet.

A mind-controlled wheelchair proved successful in helping paralyzed patients navigate a cluttered room. The patients are fitted with a cap of 31 electrodes that detect brain signals

‘The concept of a thought-powered wheelchair has been studied for years, but most projects have used non-disabled subjects or stimuli that lead the device to more or less control the person rather than the other way around,’ the researchers shared in a press release.

‘In this case, three individuals with tetraplegia, the inability to move their arms and legs due to spinal injuries, operated the wheelchair in a cluttered, natural environment to varying degrees of success.’

The electrode-fitted skullcap provides a non-invasive method for collecting brain signals and transmitting them to a nearby device – in this case, the laptop on the back of the wheelchair.

The first part of the experiment involved training patients on how to use the mind-controlled wheelchair. 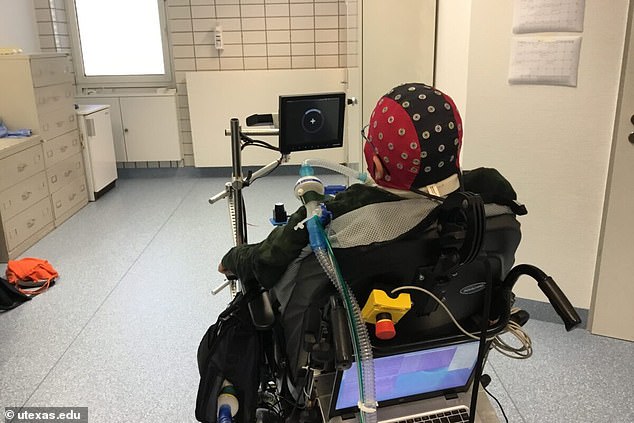 The brain signals are sent to a laptop attached to the  back of the chair, and artificial intelligence translates the signals into wheel movements

Researchers instructed them to imagine as if they were moving their own hands and feet; these were then assigned different directions in the system.

The second contributor to the success of this study borrowed from robotics.

The wheelchair was designed with sensors that scoured the surrounding environment and robotic intelligence software that helped the chair fill in blanks in the users’ commands to facilitate the accurate and safe movement of the wheelchair.

The team tested everything with the three participants, who were asked to move either left or right 60 times, New Scientist reports.

And the steering accuracy of ‘Person 3’ improved from 67 percent to 91 percent. 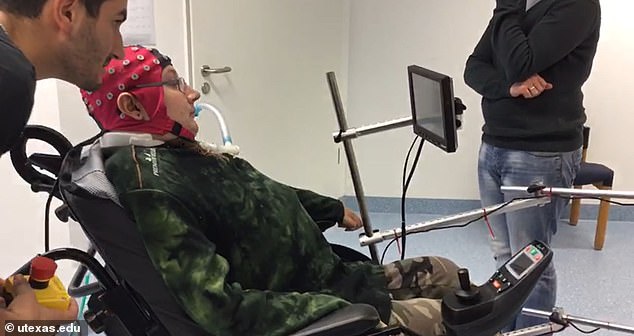 ‘Person 2’ consistently steered with an average accuracy of 68 percent over their training sessions.

Then the real test was conducted – participants were asked to move the wheelchair to four checkpoints within a room filled with beds, chairs and medical equipment.

All participants had to go around obstacles such as a room divider and hospital beds, which were set up to simulate the real-world environment.

The first person finished the course in about four minutes, with 80 percent accuracy over 29 attempts.

Person 3 completed it in seven minutes with 20 percent success during 11 attempts.

However, Person 2 reached the third checkpoint in about 5 minutes during 75 percent of their attempts but failed to complete the course.

José del R. Millán, the study’s corresponding author at The University of Texas at Austin, said in a statement: ‘It seems that for someone to acquire good brain-machine interface control that allows them to perform relatively complex daily activity like driving the wheelchair in a natural environment, it requires some neuroplastic reorganization in our cortex.’