Letting off steam: Scientists create soft robot fingers that ‘sweat’ like humans during demanding tasks to stop them overheating

Robots have been created by scientists that ‘sweat’ like humans during demanding tasks to stop them overheating.

Robotic technology is advancing every day and machines are being given more demanding tasks that generate more heat as a by product.

This heat could cause the robot to malfunction if it doesn’t cool down, which prompted researchers from Cornell University to look at how humans get cool.

They developed a technique that allows machines to ‘sweat’ off cooling liquid stored around the component responsible for moving and controlling the system.

It is still an early prototype with a number of problems including the sweating process causing the robot to struggle to move.

The team, which includes a scientist from Facebook’s reality lab, are hopeful it will eventually be a more reliable alternative to bulky cooling systems in use today.

Traditional actuators, the component responsible for moving and controlling a mechanism or system, are rigid and include fans and radiators.

This limits robots and mechanisms to bulky, solid objects, which goes against a trend to create more fluid and soft forms of robots.

Traditional cooling components take up valuable space inside electronics and add a lot of weight, according to Thomas J Wallin from Facebook reality lab.

‘Additionally these components are conventionally made from rigid materials that are incompatible with fully soft robots.

‘So to realise the numerous advantages of soft robots, we wanted to explore a thermo regulatory strategy that was compatible with soft polymeric materials.’

They created finger-like fluidic actuators that are made of hydrogels, a type of material that can hold a large amount of water and act as heat reservoirs. 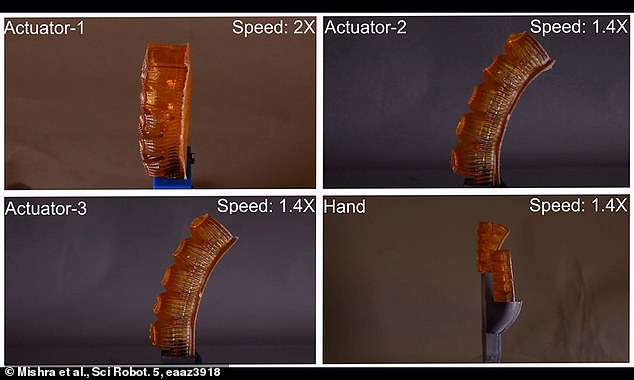 They created finger-like fluidic actuators that are made of hydrogels, a type of material that can hold a large amount of water and act as heat reservoirs

Each of these fingers feature a bottom layer with an internal channel for water flow and a top layer dotted with micropores.

At low temperatures below 86 degrees Fahrenheit, the pores remained closed.

When the temperature rises, the top layer expands, dilating the pores and allowing pressurised fluid from the bottom layer to ‘sweat’ out of the pores.

In testing the sweating actuators cooled off about six times faster than their non-sweating counterparts when exposed to wind from a fan.

However, it will be a while before they start appearing in mainstream technology, as the team haven’t been able to find a way to replenish water lost during operation.

The study has been published in the journal Science Robotics.

WILL YOUR JOB BE TAKEN BY A ROBOT?