Scientists create the first geological map of the lunar surface

Rocking all over the Moon: Scientists create the first geological map of the lunar surface showing exactly what our nearest neighbour is made of to help NASA plan future missions

NASA will have a new resource to help it plan future missions to the Moon – after geologists create the first map of the rocks on the lunar surface.

The lunar map, called the ‘Unified Geologic Map of the Moon’, has been created by the United States Geological Survey (USGS), NASA and the Lunar Planetary Institute.

The colourful map is designed to act like a blueprint of the Moon’s surface geology and will be ‘invaluable to the scientific community, educators and the public’.

The high-resolution detailed map will allow space agencies plan future missions and get a better idea of where to land, where to look for resources and even where to place a base

The colourful map is designed to act like a blueprint of the Moon’s surface geology and will be ‘invaluable to the scientific community, educators and the public’, say the USGS

The USGS digital map is available online for free and shows the geology of the Moon in ‘incredible detail’ at a scale of one to five million.

‘This map is a culmination of a decades-long project,’ said Corey Fortezzo, USGS geologist and lead author.

‘It provides vital information for new scientific studies by connecting the exploration of specific sites on the moon with the rest of the lunar surface.’

It’s the first time the entire lunar surface has been completely mapped and uniformly classified by scientists – something needed for more adventurous missions to the Moon being planned by NASA and others.

‘People have always been fascinated by the moon and when we might return,’ said current USGS Director and former NASA astronaut Jim Reilly.

‘So, it’s wonderful to see USGS create a resource that can help NASA with their planning for future missions.’

USGS researchers used existing maps of the Moon and redrew them to align with modern data sets from recent satellite observations.

They also developed a unified description of the rock layers of the Moon resolving issues from previous maps where names, descriptions and ages were inconsistent.

USGS researchers used existing maps of the Moon and redrew them to align with modern data sets from recent satellite observations. Different colours represent different elevations and surface features such as craters and rock types 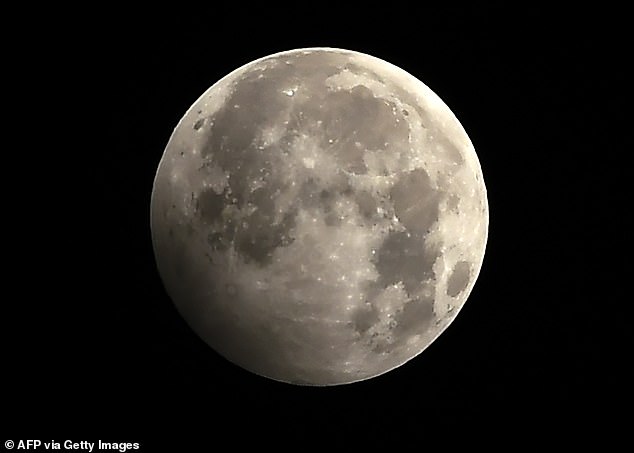 Making a map like this is not easy. ‘It was a huge effort for our team to complete this new map and make it seamless,’ said Astrogeology Director Justin Hagerty.

‘Much of the historical mapping was performed by various groups and at regional scales. Slightly different methods were used, so that maps of the same feature that had been mapped by different groups would not match.’

Challenges of the decade-long process included the fact that the Apollo-era lunar maps were only available in paper format and early digitized versions of the paper maps did not align with updated and more accurate images.

The original six maps were digitally renovated and reconciled to the newer datasets.

Despite the new digital format, there were still boundary issues such as differences in geologic units, unit names, unit descriptions, age relationships, and surface features were not consistently mapped.

This meant that the geologists had to create a new unified system to identify every rock and feature of the Moon and give it a consistent name.