An opossum has become the world’s first genetically engineered marsupial, scientists in Japan have revealed.

The gene editing project on the creature has been undertaken by scientists from the RIKEN Center for Biosystems Dynamics Research (BDR) in Kobe, Japan.

They say their study will contribute to deciphering the genetic background of unique characteristics observed only in marsupials.

It could also aid in the development of new treatments for diseases that affect humans – such as cancer and Alzheimer’s, according to the team.

WHAT IS GENE EDITING?

Scientists use different technologies to do this.

These technologies act like scissors, cutting the DNA at a specific spot.

Then scientists can remove, add, or replace the DNA where it was cut.

The first genome editing technologies were developed in the late 1900s.

More recently, a new genome editing tool called CRISPR, invented in 2009, has made it easier than ever to edit DNA.

Marsupials, which are chiefly found in Australia and New Guinea, as well as the Americas, are a class of mammal.

Their young are born incompletely developed but develop further in the safety of a pouch – the most famous example being the kangaroo.

Opossums, which are found in the Americas, are known for carrying their adorable young on their back after they have exited the pouch.

They’re also known for involuntarily ‘feigning’ death when confronted by predators, such as foxes, cats and birds of prey.

‘Marsupials represent one of three extant mammalian subclasses with a number of unique characteristics not shared by other mammals,’ said study leader Hiroshi Kiyonari.

‘Having established the technology in this proof-of-concept experiment, future studies can create genetically modified marsupials that will impact the fields of mammalian embryology, genomic imprinting, reproduction, neurobiology, immunogenetics, cancer biology, and even comparative evolution.’

Like other marsupials, the opossum has a variety of characteristics that are not found in other mammals. 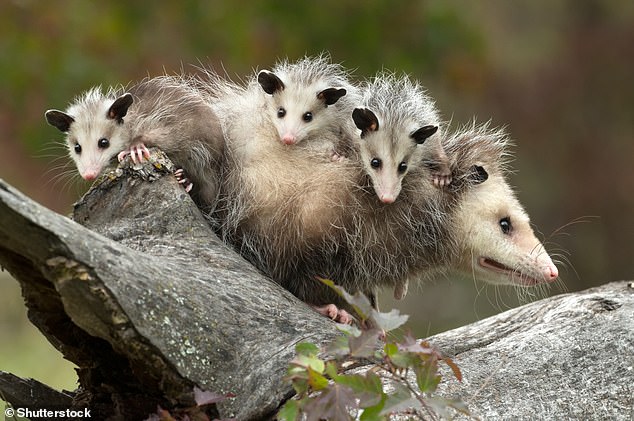 It develops without a functional placenta, and pups are born prematurely before developing inside the mother’s pouch.

Amazingly, unlike other mammals, newborn opossum pups with spinal cord injuries have the ability to naturally heal themselves.

Like humans, but not other non-marsupial mammals, the opossum also gets skin cancer through exposure to ultraviolet light.

Now, the researchers are using new gene editing technology to learn more about the underlying genetics and revealing the biological processes at work.

DIFFERENCES BETWEEN POSSUM AND OPOSSUM

Possums are native to Australia and New Guinea, while opossums are found in the Americas. In the US and Canada, the only opossum species is the Virginia opossum.

Possums tend to be herbivores and inhabit most vegetated habitats, while opossums are omnivores or scavengers.

The opossum became the first marsupial to have its entire genome sequenced nearly 15 years ago, followed by the Tasmanian devil and the kangaroo.

The genome is the complete set of genetic information in an organism, stored in long molecules of DNA called chromosomes.

The experts claim the opossum is a perfect representative for marsupials generally in such studies, because it’s thought to be the ancestor of all marsupials.

Genome editing requires the systematic collection of fertilised eggs. The solution for genome editing is injected into these eggs.

Since opossums have a long estrus cycle and a strong sense of territoriality, it takes about a week for a couple to mate even if they live together.

So the team administered a hormone to stimulate estrus in females, to shorten time required for mating.

Transplant of an embryo into a surrogate mother is required to generate a genome-edited fertilised egg.

Researchers transferred the fertilised egg into the uterus of a fertile female opossum, and successfully obtained pups.

This marks the first case that embryo transfer technology has been established in marsupials, they report.

Usually the solution required for genome editing is injected into the fertilised egg using a fine needle.

However, since the fertilised egg of the opossum is surrounded by a thick layer of proteins and a hard shell-like structure, the injection needle would not be able to penetrate it.

So the team applied piezoelectricity, which involves squeezing certain crystals to make electricity flow through them. 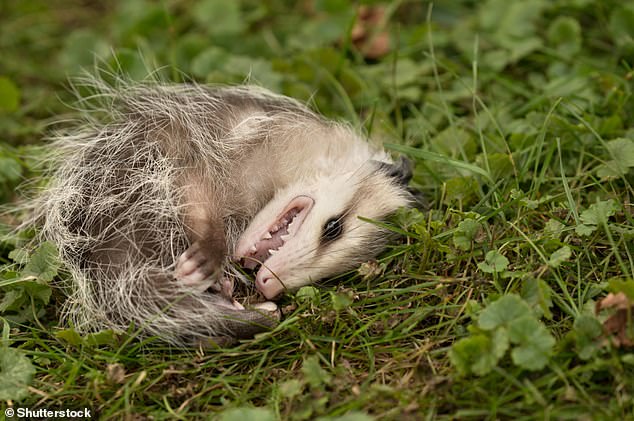 Pictured, a Virginia opossum baby ‘playing’ dead. Despite common misconceptions, this act is an involuntary biological response, not a voluntary one

‘One of the tricks to our success was using a piezoelectronic element along with the needle, which allowed the needle to penetrate the hard shell coat and thick layer surrounding the egg,’ said study leader Hiroshi Kiyonari at RIKEN BDR.

‘The piezo has thus made it possible to inject zygotes [fertilised eggs] without significant damage.’

When this gene is disrupted, pigment cannot be produced, and skin therefore lacks colour.

Some of the offspring from the experiment were albino and their genes were inherited by the next generation, marking the first successful gene editing in marsupials.

Now that the process has been established, researchers can focus on answering all their questions about marsupial biology.

The study has been published in the scientific journal Current Biology.