Scientists have developed an environmentally-friendly plasma-powered jet propulsion system that uses air and electricity to propel itself forward.

A Chinese team say their prototype can generate thrust on the same magnitude as a commercial jet engine without burning fossil fuels and emitting greenhouse gases.

The device converts high pressure air into a jet of plasma – the electrically-conductive fourth state of matter – by passing through a microwave ionization chamber.

In experiments, it lifted a 1kg steel ball over a quartz tube around 0.9 inches (24 millimetre) in diameter, which they say is proportional to a conventional jet engine.

Researchers aim to build a large array of these thrusters with high-power microwave sources to scale up the prototype design to a full-sized jet.

The prototype plasma jet device can lift a 1-kilogram steel ball over a 24-millimeter diameter quartz tube, where the high-pressure air is converted into a plasma jet by passing through a microwave ionization chamber. To scale, the corresponding thrusting pressure is comparable to a commercial airplane jet engine

‘Our results demonstrated that such a jet engine based on microwave air plasma can be a potentially viable alternative to the conventional fossil fuel jet engine,’ said Professor Jau Tang at Wuhan University, China.

‘The motivation for our work is to help solve the global warming problems owing to humans’ use of fossil fuel combustion engines to power machinery, such as cars and airplanes.

‘There is no need for fossil fuel with our design, and therefore there is no carbon emission to cause greenhouse effects and global warming.’

Plasma – the lesser-known fourth state of matter, after solid, liquid and gas – is produced when the atoms in a gas become ionized. 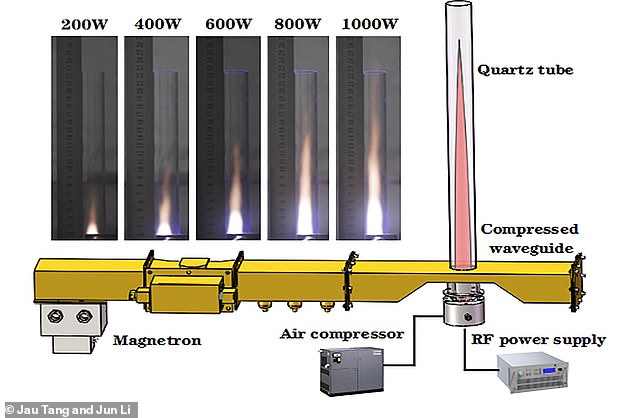 A diagram of a prototype microwave air plasma thruster and the images of the bright plasma jet at different microwave powers (top left). This device consists of a microwave power supply, an air compressor, a compressed microwave waveguide and a flame ignitor

Astrophysicists believe plasma is the most abundant form of matter in the universe and was the first of the four states of matter to be created after the Big Bang.

THE ABUNDANCE OF PLASMA

Nearly all the visible matter in the universe exists in a plasma state.

They occur in this form in the sun and stars and in interplanetary and interstellar space.

Plasmas exist in neon and fluorescent tubes, in the crystal structure of metallic solids, and in many other phenomena and objects.

It exists naturally in stars, Earth’s lighting and the sun’s surface and interior, but it can also be generated in the lab using microwaves, lasers, fire flame, an electric arc and other methods.

Plasma naturally arises due to the ionization of molecules at high temperatures or in high electric fields.

Artificial plasmas have been created for plasma display panels in TV screens, neon signs and fluorescent lamps, while plasma jet thrusters have also been used in aerospace applications for years.

Other plasma jet thrusters, like NASA’s Dawn space probe, use xenon plasma, which cannot overcome the friction in the Earth’s atmosphere. 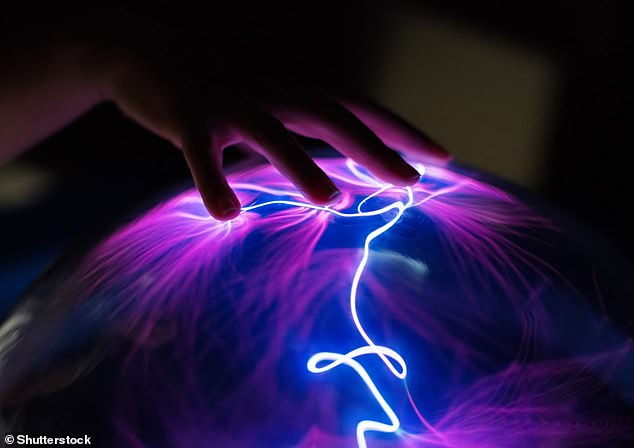 A plasma globe. When voltage is applied, a plasma is formed within the glass. Plasma naturally arises due to the ionization of molecules at high temperatures (such as in the sun) or in high electric fields (such as in lightning)

Instead the new prototype generates high-temperature, high-pressure plasma from a stationary position using only electricity and injected air, which is compressed by the microwave chamber to become plasma.

The scientists report that the prototype could be adapted by the commercial aviation industry to replace the current line of carbon-emitting air liners and are working on improving the efficiency of the device to make this happen.

‘With materials resistant to high temperature and pressure, it is possible to construct a high-performance microwave air plasma jet thruster in the future to avoid carbon emissions and global warming that arise due to fossil fuel combustion,’ the research team report in AIP Advances. 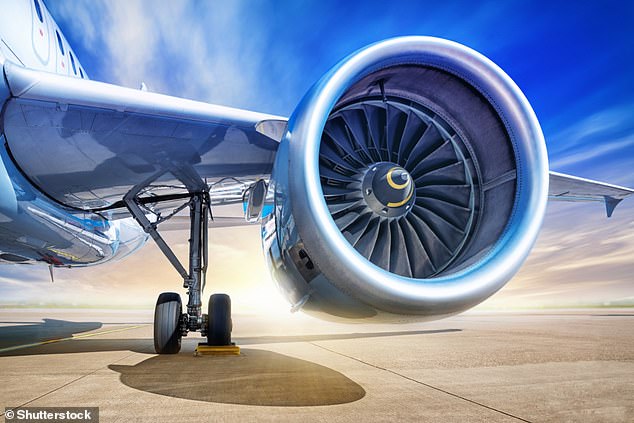 By building a large array of these thrusters with high-power microwave sources, the prototype design can be scaled up to a full-sized jet to replace jet engines that use fossil fuels for propulsion. The authors are working on improving the efficiency of the device toward this goal

Humans depends on fossil fuel as their primary energy source, especially for transportation in the form of diesel and petrol cars and commercial air liners, which commonly use petroleum.

But these fossil fuels are unsustainable and are the largest source of greenhouse gas emissions such as carbon dioxide.

Using aviation industry values, there has been a 32 per cent increase in emissions over the past five years, it reported last September.