When a dog is feeling nervous in unfamiliar surroundings, they cling on to their owners around 80 per cent of the time.

However, when they are relaxed and in a familiar location they prefer to spend up to 70 per cent of their time with strangers, a new study has found.

Previous research suggested shelter dogs start to treat someone differently after three ten minute interactions, but the study cuts this to one ten minute encounter.

Your dog is not as loyal as you might like to think, research suggests, and on average starts treating new people like friends in just ten minutes (stock image)

Researchers from the University of Florida and Arizona State University gave pet dogs a choice of getting petted by their owner or stranger in different situations.

During the 10 minute sessions, the dogs were free to do as they wanted and, if they approached someone, they were petted for as long as they wanted, writes National Geographic.

Researchers wanted ‘to test whether owned dogs would prefer their owner over a stranger and whether the familiarity of the testing context would influence preference’, according to the paper.

‘Owned dogs preferred to interact with their owners when in an unfamiliar context, but allocated more time to the stranger in a familiar context’, researchers led by Erica Feuerbacher wrote in a paper published in the Journal of the Experimental Analysis of Behaviour.

The research shows context and environment are important in dog behaviour and how they form preferences.

‘In new places or during moments of discomfort, dogs can be inclined to seek out their owners’, said Julie Hecht, a PhD candidate at the Graduate Center, City University of New York, who was not involved in the research.

‘The owner is important for the dog in stressful situations. When comfortable, dogs are more likely to interact with unfamiliar people.’

Experts acknowledge that it is the owner’s presence in the familiar place that makes the dog feel safe enough to spend time with a stranger.

The also found that shelter dogs were particularly likely to form bonds with strangers.

This suggests they are unlikely to be pining for their old home for long after being taken in by someone new, researchers said. 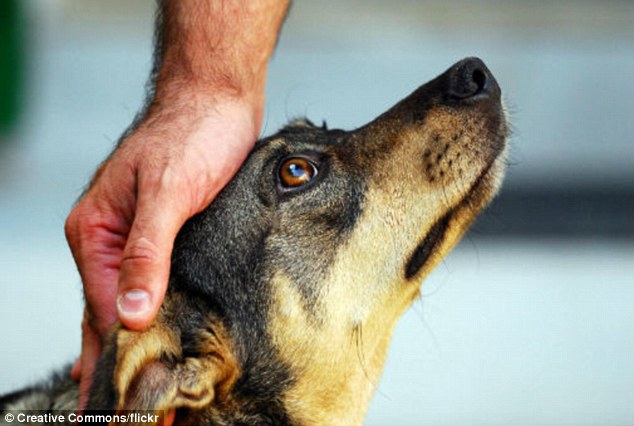 Shelter dogs were particularly likely to form bonds with strangers. This suggests they are unlikely to be pining for their old home for long after being taken in by someone new, researchers said (stock image)

Earlier this month, researchers found that ‘dog-speak’ is important for bonding with pets.

Scientists found that dogs need to hear words spoken rhythmically in a high-pitched emotional voice in order to find it relevant.

Experts said that speaking to a dog using a baby-like tone can have the same benefits that occur when a parent engage in this way with a young child.

Dr Katie Slocombe, a researcher from the University of York’s Department of Psychology, said: ‘A special speech register, known as infant-directed speech, is thought to aid language acquisition and improve the way a human baby bonds with an adult.

‘This form of speech is known to share some similarities with the way in which humans talk to their pet dogs, known as dog-directed speech.

‘This high-pitched rhythmic speech is common in human interactions with dogs in western cultures, but there isn’t a great deal known about whether it benefits a dog in the same way that it does a baby,’

Previous studies on communicating with dogs had suggested that talking in a high-pitched voice with exaggerated emotion, as adults do with babies, improved engagement with puppies but made little different with adult dogs.

For the study, researchers conducted a series of speech tests with adult dogs, where they were given the chance to listen to one person using dog-directed speech containing phrases such as ‘you’re a good dog’ and ‘shall we go for a walk?’

Another person using adult-directed speech with no dog-related content uttered phrases such as ‘I went to the cinema last night.’

‘When we mixed-up the two types of speech and content, the dogs showed no preference for one speaker over the other.

‘This suggests that adult dogs need to hear dog-relevant words spoken in a high-pitched emotional voice in order to find it relevant.

‘We hope this research will be useful for pet owners interacting with their dogs, and also for veterinary professionals and rescue workers.’

DOES USING YOUR HANDS AND A HIGH-PITCHED VOICE HELP YOU COMMUNICATE WITH DOGS?

Using your hands and a high-pitched voice really does help you communicate with dogs, according to recent research.

A January 2017 study published in Proceedings of the Royal Society B found that humans use an even higher pitch when talking to puppies, and that this tactic really does help the animals to pay attention more.

The research showed that talking to puppies using dog-directed speech makes them react and attend more to their human instructor than regular speech.

It’s also been proven that we can communicate with dogs through physical gestures.

From puppy age on, dogs respond to human gestures, such as pointing, in ways other species can not.

The test is very simple. Place two identical cups covering small pieces of food in front of your dog, making sure it cannot see the food and doesn’t have any information about the contents of the cups.

Now point to one of the two cups while establishing eye contact with your dog. Your dog will follow your gesture to the cup you pointed to and explore the cup, expecting to find something underneath.

This is because your dog understands that your action is an attempt to communicate.

This is fascinating because not even human’s closest living relatives, chimpanzees, seem to understand that humans communicate intent in this situation.

Nor do wolves – dog’s closest living relatives – even if they are raised like dogs in a human environment.