Water’s ultimate freezing point has just got even lower, a new study shows.

The experts achieved their record using droplets only around two nanometres in diameter – about one million times smaller than a snowflake.

Their research is important because the freezing point of tiny water droplets plays a role in the survival of animals in cold environments, they say.

A frozen water droplet inside an animal cell leads to the rupture of the cell and death.

Understanding the conditions that lead to the formation of ice could also help research in planetary science, such as assessing conditions on other worlds.

Researchers put droplets as small as two nanometres in contact with soft interfaces, like gels and lipids. An illustration from the team’s research paper shows a nanodroplet surrounded by oil where ice nucleation – the initial process that occurs in the formation of a crystal from a solution – occurs

HOW DOES ICE FORM?

Water is composed to two hydrogen atoms bound to an oxygen atom.

This gives liquid water many of its unusual properties but also effects the crystal structure it takes when it freezes too.

Once temperatures drop below freezing point for water, the electrical charges on the molecules cause it to form a open lattice structure, which is why water expands when it freezes.

Its slipperiness is caused when pressure or friction causes a thin layer of ice to melt, reducing the traction on the surface.

Below this temperature, freezing has been inevitable, until now, according to the study authors at the University of Houston.

‘Water-ice transformation of few nanometre nanodroplets plays a critical role in nature including climate change, microphysics of clouds, survival mechanism of animals in cold environments, and a broad spectrum of technologies,’ they say.

‘The findings provide an understanding of various natural phenomena and provide a route for the design of superior anti-icing biomimetics or smooth liquid-infused surfaces.’

The transformation of water into ice is one of the great mysteries of science, according to the team, and how and why it happens is the subject of intense scrutiny.

Water actually has some odd characteristics – unlike other liquids, it becomes less dense as it freezes. This is why blocks of water ice float on liquid water rather than sinking to the bottom.

Liquid water expands when it starts to reach its freezing point, which accounts for lakes freezing from the top rather than the bottom.

Amazingly, the smallest nanodroplet of water in which ice can form is only as big as 90 water molecules – a tenth of the size of the smallest virus.

To learn more about the crystallisation of water into ice at the molecular level, the team put droplets as small as two nanometres in contact with soft interfaces, like gels and lipids. 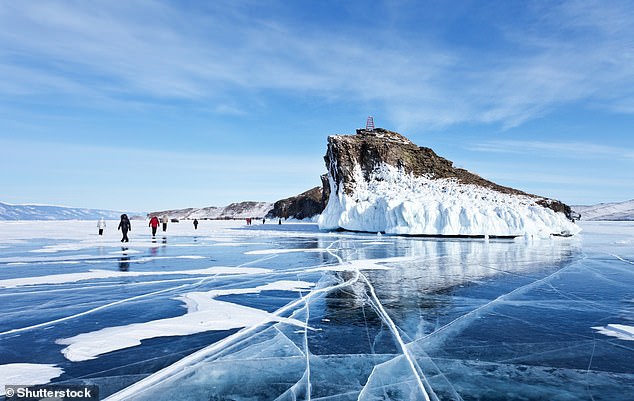 Liquid water expands when it starts to reach its freezing point, which accounts for lakes freezing from the top rather than the bottom. Pictured is ice of the frozen Lake Baikal in Russia

They found they were able to maintain tiny droplets as liquid down to -47.2°F by putting them in contact with soft surfaces.

It’s thought the suppression of ice nucleation – the initial process that occurs in the formation of a crystal from a solution – was due to pressure on the droplets from the soft interface.

‘We found that if a water droplet is in contact with a soft interface, freezing temperature could be significantly lower than hard surfaces,’ said study author Professor Hadi Ghasemi at the University of Houston.

‘Also, a few-nanometre water droplet could avoid freezing down to -44°C if it is in contact with a soft interface.’

It’s already known that the freezing point of water drops as you apply pressure, explains Dr Christopher S. Baird at West Texas A&M University, who was not involved in the study.

‘For most liquids, applying pressure raises the temperature at which the liquid freezes to solid,’ he said. 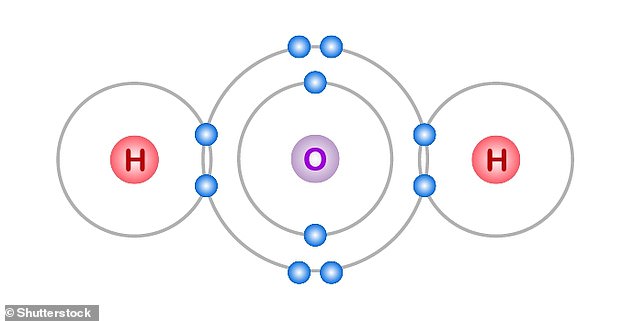 ‘A solid is formed when the loose, meandering molecules of a liquid get slow enough and close enough to form stable bonds that pin them in place.

‘When we apply pressure to a liquid, we force the molecules to get closer together. They can therefore form stable bonds and become a solid even if they have a higher temperature than the freezing point at standard pressure.

‘Water is somewhat unique, though. Water molecules spread out when they are bonding into a solid crystalline structure.

‘This spreading-out action of the water molecules during freezing also means that applying pressure to water lowers the freezing point.’

Water’s anomalies, such as how it freezes, are key to many natural and technological processes.

The new study could also help climate prediction, cloud conditions, cryopreservation of organs and technologies exposed to icing conditions such as aircraft and wind turbines, the University of Houston team say.

Their study has been published in Nature Communications.

Scientists have created a mysterious phase of water – called ‘superionic ice’ – by beaming X-rays through a diamond in the lab.

Extreme conditions are necessary to produce superionic ice, sometimes referred to as ‘hot ice’, which adds to the other well-known phases of water – solid ice, liquid water and vapour gas.

Superionic ice is a special crystalline form, half solid, half liquid – and it’s electrically conductive. 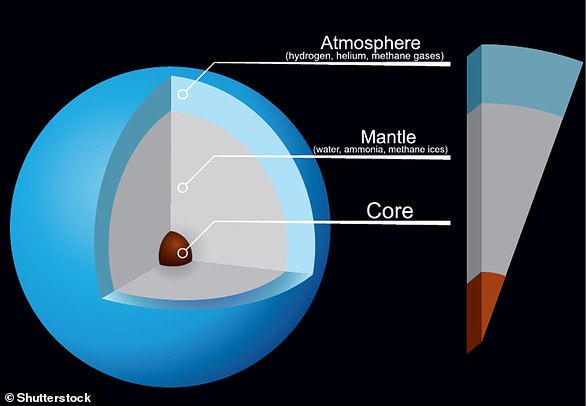 Superionic ice is formed at extremely high temperatures and pressures at the centre of planets like Neptune and Uranus in the outer solar system. Pictured is a cutaway of Uranus

It’s formed at extremely high temperatures and pressures at the centre of planets like Neptune and Uranus in the outer solar system.

Knowing more about the different phases of H2O – of which there are several – could help find life on other planets, the scientists believe.