Scientists rediscover a rare type of blue bee in Florida, once presumed to be extinct

Scientists rediscover a rare type of ‘blue’ bee in Florida, which had been presumed extinct for four years after commercial citrus farms eroded its natural habitat

Researchers in Florida have rediscovered a rare species of bee that was last seen in 2016, prompting some to fear it might have gone extinct.

Chase Kimmel, a postdoctoral researcher working with the University of Florida’s Florida Museum of Natural History, stumbled onto the blue calamintha bee in early 2020, while working in the field on an unrelated project.

He was installing a bee condo near a species of flower called Ashe’s calamint, which is one of the bees’ main food sources, and noticed the rare creature nearby and took a series of photographs to confirm its identity.

The blue calamintha bee was last seen in 2016, prompting some to fear it might have gone extinct, but researchers from the University of Florida identified the bee in early 2020 and tracked it across 50 square miles of central Florida

The bee had previously been listed by the Florida State Wildlife Action Plan in its category of greatest conservation need, and had only been observed in four small areas of central Florida, totaling 16 square miles.

‘I was open to the possibility that we may not find the bee at all so that first moment when we spotted it in the field was really exciting,’ Kimmel told the Museum’s blog.

Kimmel tracked the blue calamintha bees in the four locations they’d originally been observed in, as well as six new areas in central Florida where they’d never been seen, spanning 50 square miles instead of just 16.

Tracking the bees was initially a challenge because they prefer to live alone instead of in large communal hives.

‘It is still very rare and can take many hours and days to find it which reinforces how rare it can be,’ Kimmel said in an interview with CNN.

‘Its presence is highly associated with Ashe’s calamint, so the bee may influence how well the plant is pollinated which can affect the plant’s survivorship.’ 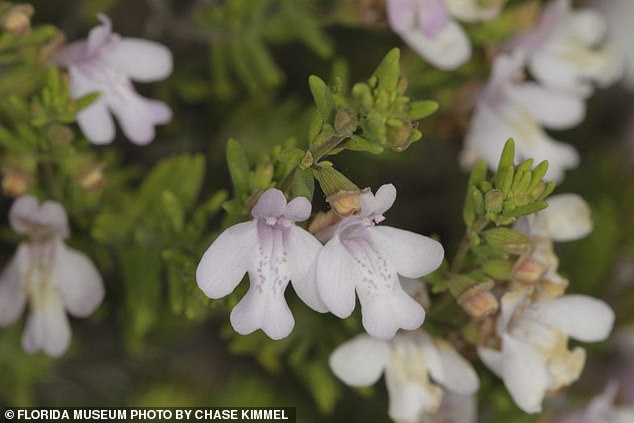 The bee depends on the Ashe’s calamint, a flowering plant that is also endangered, as its main food source, and the flower depends on the bee to help pollinate it and keep it from dying out

One of the main threats to the bees have come from human developments encroaching on their habitat, mainly in the form of commercial citrus farms.

‘It’s one thing to read about habitat loss and development and another to be driving for 30-40 minutes through miles of orange groves just to get to a really small conservation site,’ Kimmel said.

‘It puts into perspective how much habitat loss affects all the animals that live in this area.’ 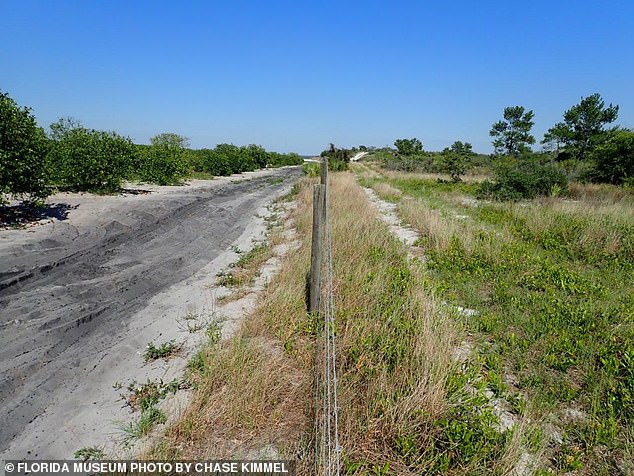 The main environmental threat to both Ashe’s calamint flowers and the blue calamintha bee are central Florida’s rows and rows of citrus farm, which have eroded the natural habitat of both species

The team had initially planned to send a larger group of volunteers out to collect data on the bees’ movements, but because of the COVID-19 pandemic Kimmel has been the lone field researcher.

‘We’re trying to fill in a lot of gaps that were not previously known,’ Kimmel said.

‘It shows how little we know about the insect community and how there’s a lot of neat discoveries that can still occur.’