Scientists have discovered a way to make animals regenerate inner-ear hair cells to restore their balance, a new study reveals.

Tiny hair cells deep in the internal ear that play a critical role in balance for animals, including humans.

Fish and birds can constantly regrow these hair cells throughout their lives, but as we age, we stop regenerating these hidden elements of the internal gyroscope.

The loss of these cells one element in the aging process responsible for elderly people’s increasingly poor balance.

Now, Stanford University scientists managed to manipulate mice DNA so that they regenerated the tiny hairs, and their balance was restored too, suggesting the same restoration and improvement may be possible in humans.

The secret to balance is in the ear: Scientists have tricked mice’s bodies to regrow inner ear hair cells (not pictured) that are crucial to the balance system in the animals as well as humans. If it works in people, the technique could prevent tens of thousands of fatal falls (file)

An estimated 69 million Americans, including 35 percent of those over 40, have some form of vestibular dysfunction, meaning their balance system is faulty and may leave them dizzy, suffering vertigo and off-balance.

Suddenly, elderly people lack some of the information they need to calculate whether they are falling through space, or if their foot is about to make even contact with the ground.

The resulting falls prove deadly for many older Americans. In 2016, 36,338 people in the US died after a fall, according to the latest Centers for Disease Control and Prevention (CDC) data.

And bizarre tiny hairs deep in the inner ear may be what throws us off balance, and the key to preventing falls.

When we’re trying to balance, it may feel like it involves our sense of touch and sight, but the biological computer system that tells us when that the speed or angle at which we’re moving through the world is off is tucked within the ear.

It’s called the vestibular apparatus, and it consists of a series of canals, spaces, gels mucus and very tiny hairs.

Gravity and cellular pulleys tug at these hairs in their two respective chambers, depending on how the head is tilted in space.

The angles of the hairs from each of these two chambers create signals that travel to the brain and – in combination with sight and neck stretch – tell the brain whether it’s just the head nodding, bobbing and twisting, or the whole body tilting or toppling.

It’s a complex and intricate system used primarily to do something we largely take for granted: walk in a straight line without falling.

But as we age, parts of that system start to degrade and our balance goes with them.

Inner ear hairs are among the first components of the vestibular apparatus to go.

The 30,000 hair cells we start life with in each ear get damaged and die over time, accounting for 90 percent of hearing loss as well as balance issues – but we’re not biologically equipped to regrow or repair the cells. 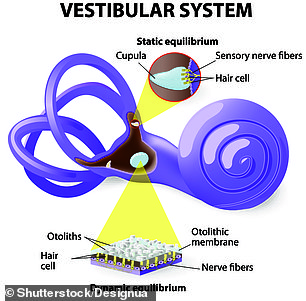 The vestibular system that gives us balance involves a complex circuit of canals, mucus, membranes, gels, nerves and hair cells

Scientists at Stanford want to change that.

To do so, they studied mice with impaired inner ear hair cells. As they observed the animals, they saw that about a third of the cells were able to spontaneously regenerate, but not very well.

The cells were ‘immature’ and weren’t consistently functional.

But the scientists figured that if they could tweak genetic information that carries instructions for making more inner ear hair cells, then maybe they could trick the mice’s bodies to do so.

So they altered a DNA-carrying protein called Atoh1 so that more copies of it would be made, translating to more inner ear hair cells.

With the extra Atoh1, the mice were able to regenerate about 70 percent of their inner ear hair cells.

Most of the cells were mature and functional.

Likewise, the mice regained about 70 percent functionality of their vestibular systems, helping to restore their balance.

Humans have the same protein, or transcription factor, suggesting that a similar tweak might restore our inner ear hair cells and vestibular systems, too.

It’s not the first time such regeneration has been accomplished, but its much better than the Stanford team has managed before.

‘We couldn’t get sufficient regeneration to recover function before.’

The new revelation, said Dr Cheng’s co-investigator, PhD student and lead study author, Zahra Sayyid,’has opened the door for many more possibilities that could lead to treatment in people with vestibular disorders.’