Raising taxes on e-cigarettes by just $1 could lead to more youngsters in their early 20s taking up smoking, a new study finds.

Researchers at Georgia State University, in Atlanta, monitored 38,000 youngsters and found raising the price of e-cigarettes triggered a rise in the number smoking by 3.7 percent once the increase was implemented.

They said the results showed taxes should be raised on both cigarettes and e-cigarettes at the same time to avoid youngsters switching to ‘more lethal’ cigarettes. They also pointed out the early 20s is a period when many switch from ‘experimental’ to ‘daily’ nicotine use.

A total of 30 American states and Washington D.C. already tax e-cigarettes in the hopes of putting off more youngsters. The Food and Drug Administration (FDA) is also cracking down on certain brands that are accused of driving a spike in nicotine use among young adults.

Researchers at Georgia State University warned raising the price of e-cigarettes by $1 would lead to 3.7 percent of youngsters switching to more lethal cigarettes 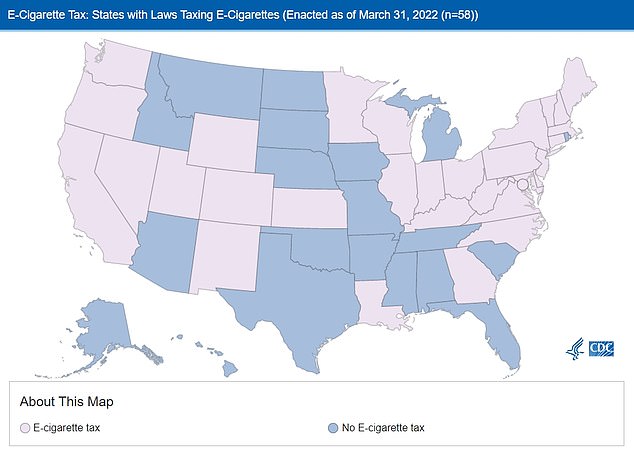 Pictured above are the states that have rules in place on taxing e-cigarettes. There is no federal tax for vapes, unlike for cigarettes

In the study, published in the journal Addiction, scientists analyzed data from the Current Population Survey — a monthly survey of households in the U.S. conducted by census officials.

Results showed that raising taxes on vaping by $1 per milliliter led to their use falling by 2.5 percent in the age group. But it also caused a 3.7 percent surge in the number taking up smoking.

Use of e-cigarettes fell during the first year of the COVID-19 pandemic, a study found last week.

Researchers from Johns Hopkins University in Maryland found that across the board it fell seven percent in 2020 compared to two years earlier.

But breaking the figures into age groups showed the fastest drop was among under-20s, where it fell by 17 percent.

It is among the first signs of a reversal of an alarming trend.

It has been illegal to buy tobacco products including e-cigarettes in the U.S. under the age of 20 since December 2019.

Similarly, increasing tax on cigarettes by $1 led to a fall in smoking by 2.5 percent but a rise in e-cigarette use by the same amount.

Dr Abigail Friedman, an associate professor of public health at Yale School of Public Health who led the study, warned some youngsters were changing how they consumed nicotine due to prices.

She said: ‘Anyone who is going to levy a tax on one tobacco or nicotine product needs to think about the tax rates on all the others.’

‘People are substituting between products, and if you raise the price of one, some subset is going to switch to a less expensive option, even if they don’t like that product as much.

‘From a public health perspective, it is important that that less expensive option is also less harmful.’

In the paper, the researchers warned cigarettes were more lethal than vaping products — suggesting it was worse for national health if vapes were more expensive.

Cigarette smoke contains more harmful substances — such as tar — which studies suggest raises the risk of health issues later in life such as cancer.

In the study, they also found people aged 18 to 25 were three times more responsive to price changes than older adults making them more likely to switch between them.

About 8.1 million American adults — or six percent — use e-cigarettes annually, estimates suggest, but rates are three times the average among under 25s.

For comparison, 30 million adults use cigarettes annually nationwide — or 12 percent of the population.

Taxes tend to be higher on cigarettes than e-cigarettes — although this varies by state.

A federal tax of $1 per pack is levied on cigarettes at present, with all states them imposing their own additional charges. Chicago, Illinois, has the highest at $6 per pack.

But for now there is no nationwide tax on e-cigarettes. A total of 30 states apply their own tax rates at present, but these are on either the wholesale price or that per container. Minnesota has the highest wholesale tax rate at 95 percent, while the highest per container is in Kentucky at $1.50 each.

A study from Johns Hopkins University in Baltimore, Maryland found last week that across the board e-cigarette use fell seven percent in 2020 compared to two years earlier.

Breaking the figures into age groups showed the sharpest drop was among those under 20 years old, down 17 percent in the period.

It has been illegal for this age group to buy tobacco products — including e-cigarettes — since December 2019. Previously, the minimum age had been 18 years.