While the world of fashion and beauty seems to be obsessed with youth and looking younger, one Instagram account is celebrating the style of the older generation.

The photographer behind the account, who is known only as Angelo, started the project in December 2016 and has garnered more than 126,000 followers

Speaking to Teen Vogue, the account’s creator said he ‘fell in love’ with the women he saw in the city, and was wowed seeing them walking through the streets and grocery stores clad in designer clothes.

‘I wish we were them, because they are beautiful,’ he said.

Scuiraglam features hundreds of glossy snaps of stylish older women dressed to the nines on the streets of Milan. Pictured: A woman dressed in a gloral Gucci suit with a designer bag hits the shops 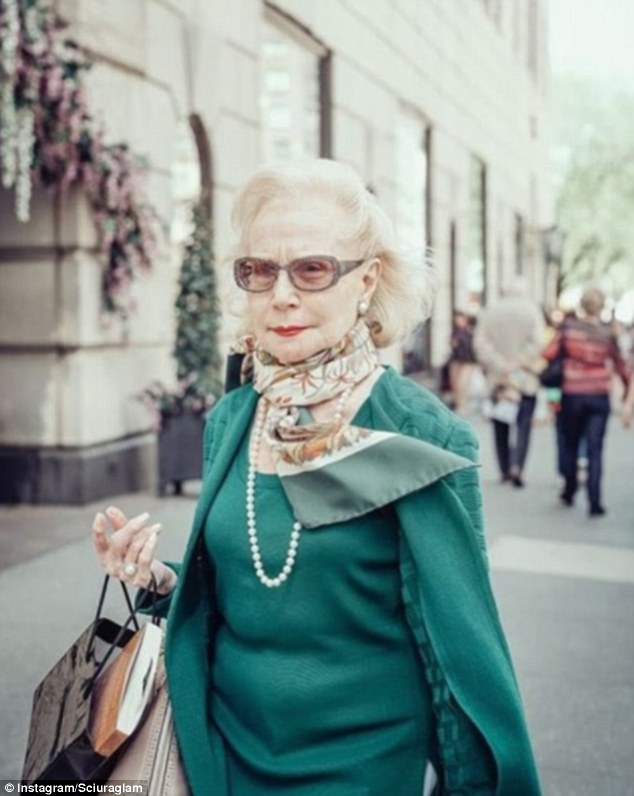 The photographer is known only as Angelo as he doesn’t want the attention to be taken away from the women on the account. Pictured: A woman in a chic green outfit in pearls struts down a Milan street 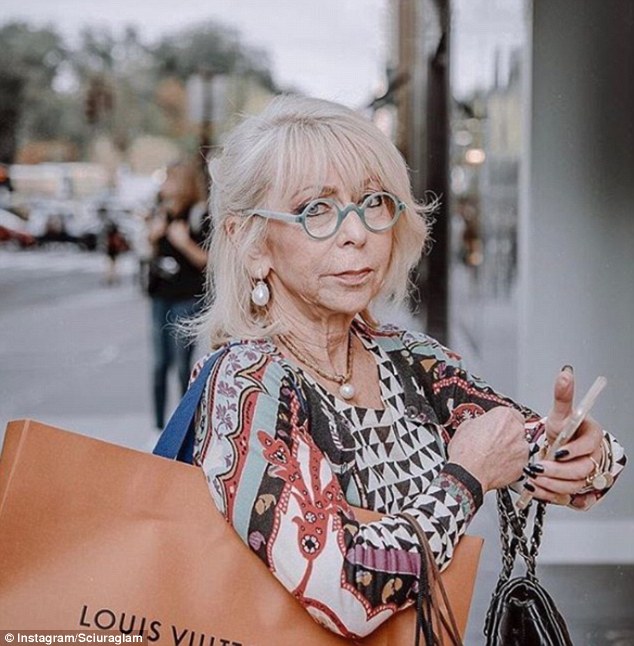 The account was created in December 2016 and has garnered over 126,00 followers. Pictured: A woman carries a Louis Vuitton shopping bag after hitting the designer boutiques

The word ‘scuira’ means a rich and fashionable older lady in Milanese slang, with the account paying homage to the most stylish older women in the city.

While the images look like they’ve come out of the pages of a fashion magazine, the photos have been snapped on the Angelo’s phone.

He said: ‘I didn’t have a real reason to start it, I just fell in love with these iconic women in Milan.’ 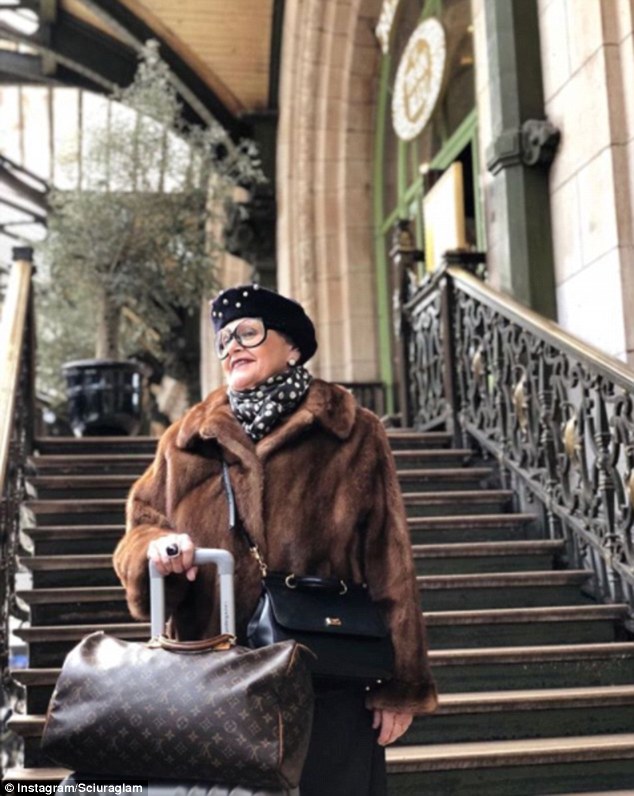 Angelo said he ‘fell in love’ with the women he saw in the city in their designer clothes. Pictured: A woman wearing a fur coat clutches designer luggage 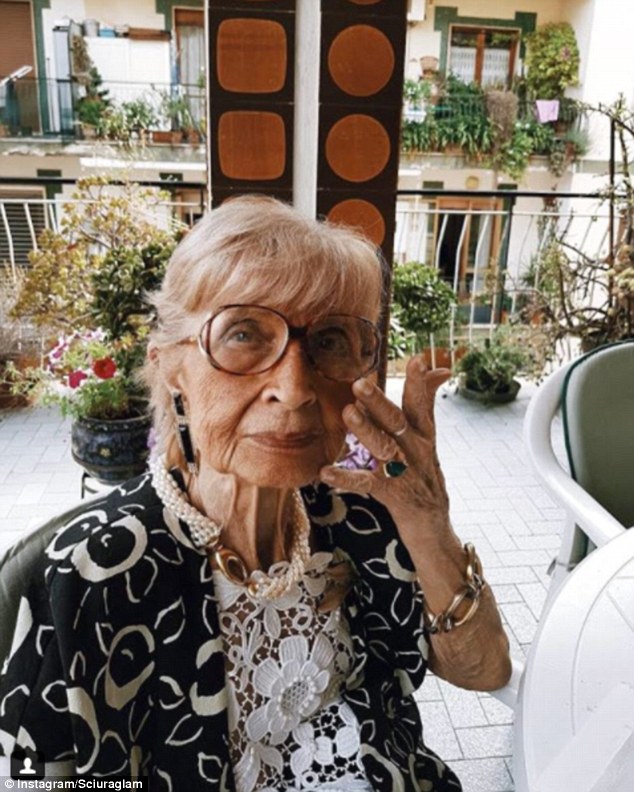 Angelo and his friends were wowed by the women as they were students and the women were always rich and wearing expensive outfits. Pictured: A woman in a pair of chic glasses frowns at the camera 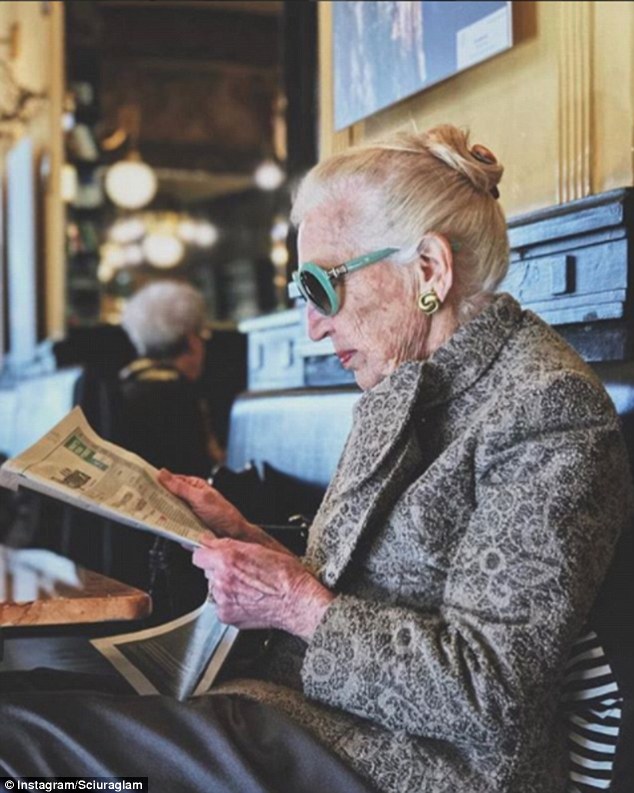 The word ‘scuira’ means a rich and fashionable older lady in local Milanese slang. Pictured: A woman in a striking designer coat reads the newspaper in a cafe in Milan 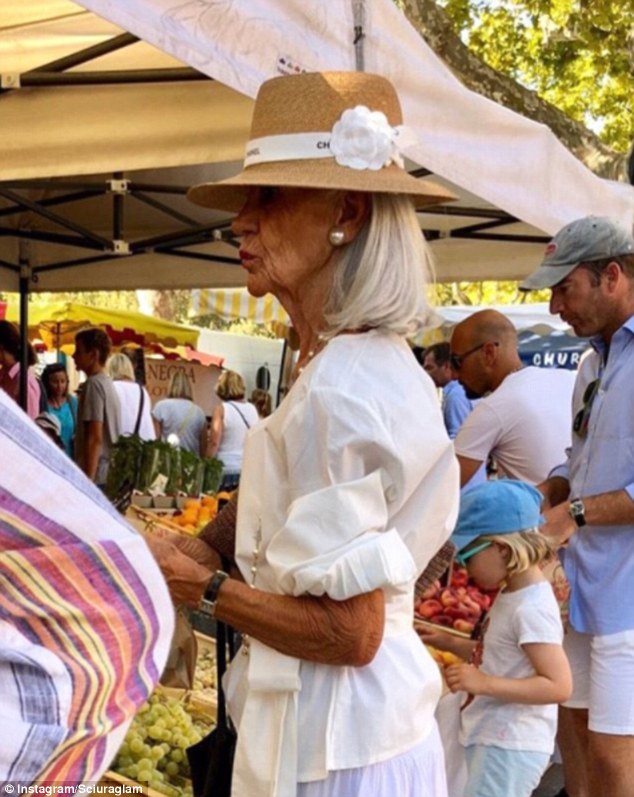 The pictures may look like they are from a fashion bible but they were actually taken on Angelo’s phone. Pictured: A woman in a Chanel hat and crisp white shirt browses a fruit stall in a Milan market

Angelo has chosen to keep his full name private as he wants the attention drawn by the account to focus on the women.

The models are chosen for their beauty and taste in clothes, as they pick outfits that Angelo says he’d wear if he was a woman.

He says he liked how different the women were to him and his student friends, as the women are often dripping in designer labels and expensive jewelry.

He continued: ‘I wish we were them, because they are beautiful, and their lives are so much easier than ours! They go to grocery stores, dressed in Gucci or Prada, and we just go to university! 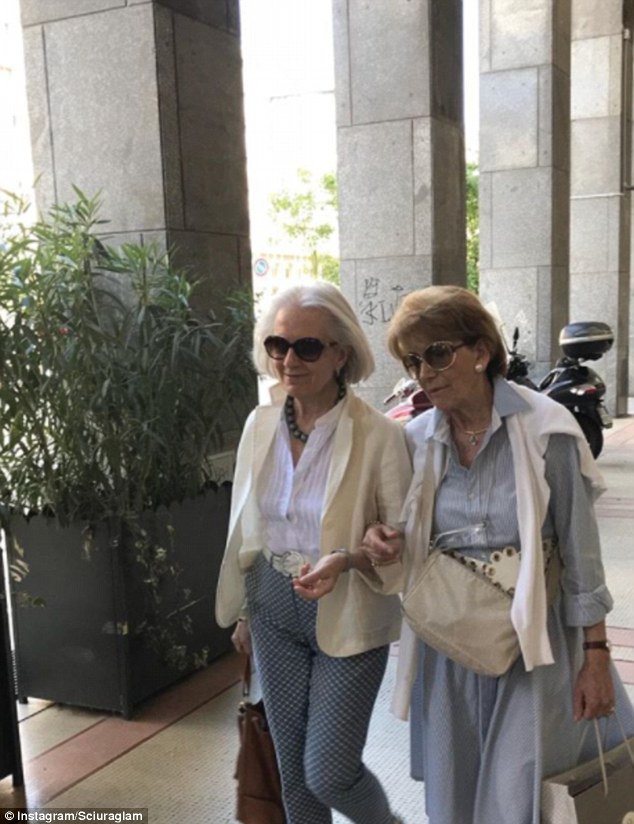 The affluent city of Milan is known for being Italy’s fashion capital. Pictured: A pair of older women link arms as they take a stroll through the city 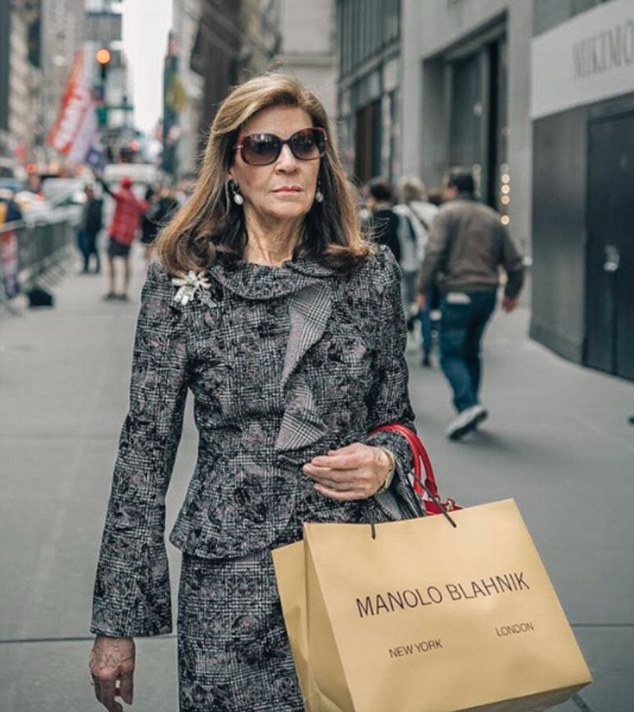 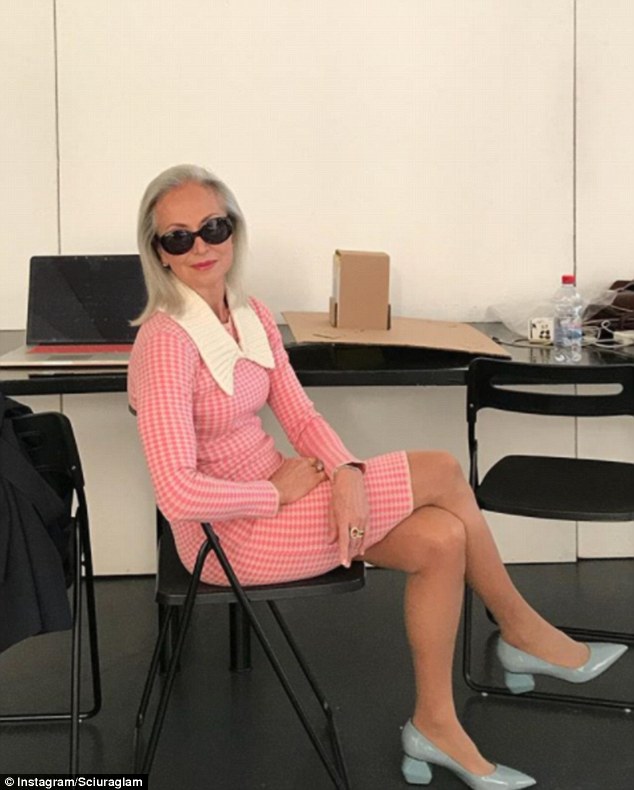 Angelo said his subjects are often wearing designer labels, with their favourites being Gucci and Prada. Pictured: A woman in a striking pink tweed dress poses for the camera

‘They are always in the centre of Milan, because they are rich.’

Each photo captures a woman doing an every day errand such as shopping as seeing friends while dressed in expensive clothing, usually accompanied by a witty caption.

One striking photo sees a woman browsing fruit on a market stall wearing a Chanel hat and crisp white blouse, with style women even half her age might envy. 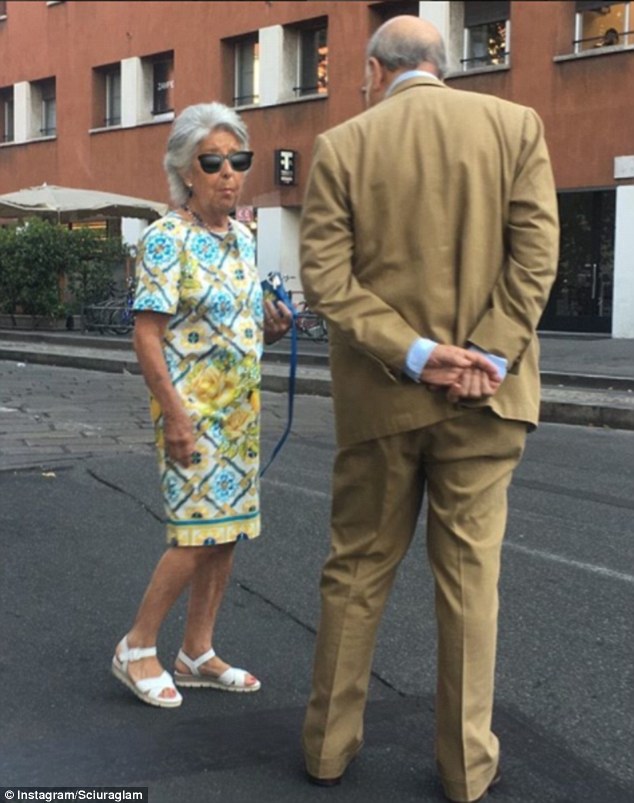 Angelo asks each woman permission to take their picture and the account is gaining popularity. Pictured: A woman in a bright patterned dress poses with a male companion in  a Milan street 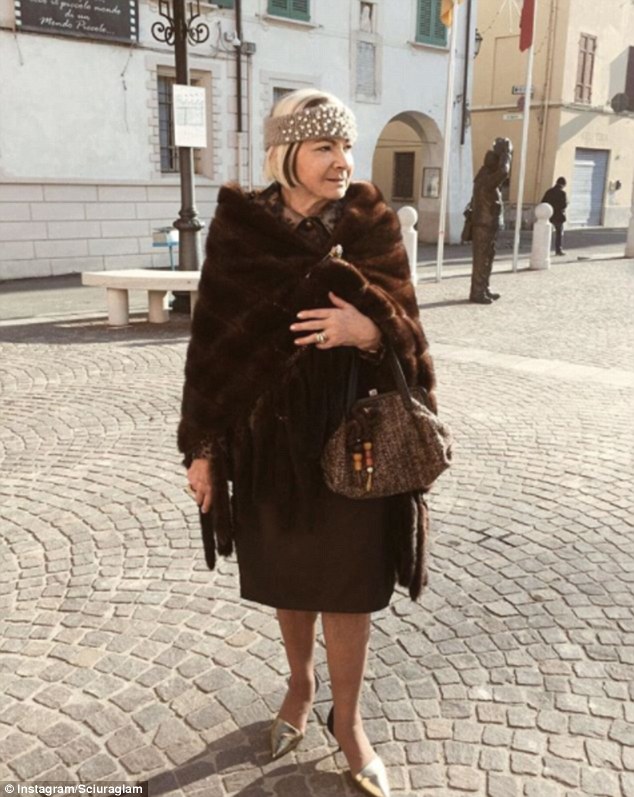 The account has posted 279 photos of Milan’s most fashionable women. Pictured: A woman dons a brown fur wrap with a glamorous headpiece in a Milan street 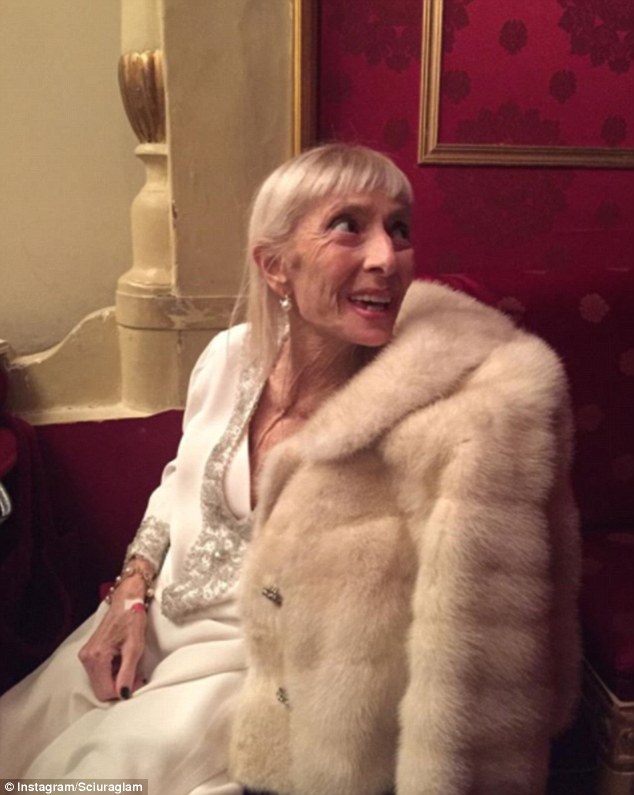 The striking photographs are often accompanied by witty captions. Pictured: A woman in a white fur coat smiles for the camera in Milan

The caption reads: ‘The curling of the lips when we don’t find the fruit we’re looking for.’

Another photo sees a striking women wearing a floral Gucci suit and a large hat relaxing in a clothing store while she waits for friends.

‘When all your friends have come to visit but you have to wait because they don’t have Gucci outfits in their closet,’ the caption reads.