Fleets of electric scooters are being removed from the streets of Miami amid fears they become flying projectiles when Hurricane Dorian hits next week.

The move will prevent the scooters from being thrown into the air by sustained winds that could reach as high as 156mph.

Six companies – Bird, Bolt, Jump by Uber, Lime, Lyft and Spin – were ordered to remove their electric scooters from the streets of Miami by noon on Friday ahead of Hurricane Dorian. Pictured: A man scooters in Miami, Florida, June 2019

Dorian is becoming more powerful as it passes the warm waters off of Florida’s coast, and maximum sustained winds increased Friday morning to near 110 mph.

On Friday afternoon, the hurricane became a classified as a major hurricane and Category 3.

By the time Dorian hits Florida, it is likely to hit as Category 4 or Category 5 storm. If it becomes a Category 5, Floridians will have to battle wind speeds of more than 156mph.

As many as 10 million people will be caught in the crosshairs when it makes landfall in the US.

Bird, Lyft, Uber and Spin told CNBC they were suspending their scooter operations in Miami until the storm has passed.

Uber told Gizmodo in a statement that its fleet had also been pulled from Tampa.

‘We have been in close contact with local officials and have disabled service for JUMP scooters,’ a spokesperson told the website.

We are monitoring Hurricane Dorian closely and have removed all JUMP scooters from the roads in Miami and Tampa.’

A spokesperson for Lime told CNBC that, in addition to Miami, the company pulled its fleet in Fort Lauderdale and Orlando, and reduced the fleet size in Tampa.

‘We’re in touch with each city and will comply with any request to prioritize safety,’ the spokesperson said. 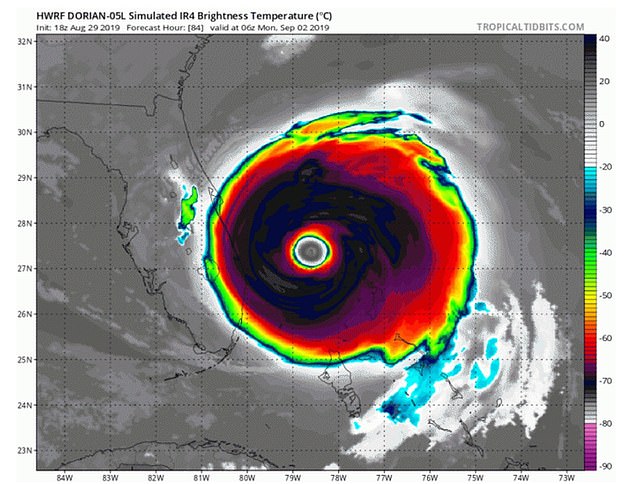 ‘We’re also communicating with our riders to let them know of these steps and to encourage them to follow the guidance of their local authorities and remain safe.’

Scooters are not the only concern. Officials and residents about the number of cranes being used for construction in Miami-Dade and Broward counties.