A heat wave that overtook much of the East Coast and Midwest have prompted at least 21 states to enact some form of heat advisory that will affect 75 million Americans.

The heat wave arrived in the United States on Friday, impacting states from New York to South Dakota, and showed little sign of cooling off by day’s end.

States in the Midwest can expect heat index values to skyrocket into the triple digits on Saturday, while residents in the Northeast will reach the 90s.

The worst of the heat on Saturday was felt in parts of the Ohio Valley and further west into states like Illinois, Iowa and parts of Kansas.

At least 21 states this weekend were issued some form of heat advisory as a heat wave causes temperatures to soar. Pictured: 5 People dip their feet in the fountain water at the World War II Memorial on the National Mall as the temperature reaches 95 degrees Fahrenheit in Washington D.C. 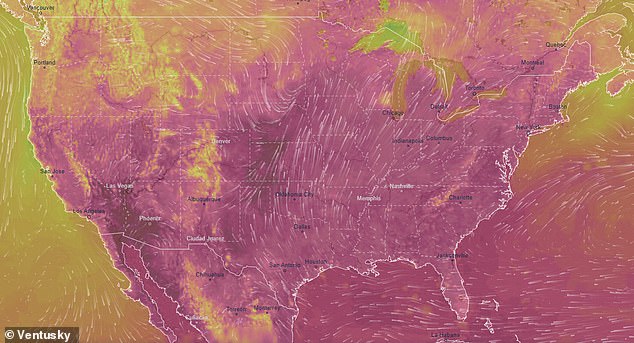 Pictured: a Ventusky map shows that much of the US has soaring temperatures, identified by the deep red and red areas, on Saturday

Places like Illinois, Indiana, Wisconsin, Michigan and Ohio were given regular heat advisories.

In the Northeast, Pennsylvania, New Jersey, Delaware and Maryland ranked among those with extreme heat this weekend.

The excessive and regular heat advisories will affect around 75 million Americans, but about 280 million people – or 87 per cent of the US – will experience temperatures at or above 90 degrees Fahrenheit. 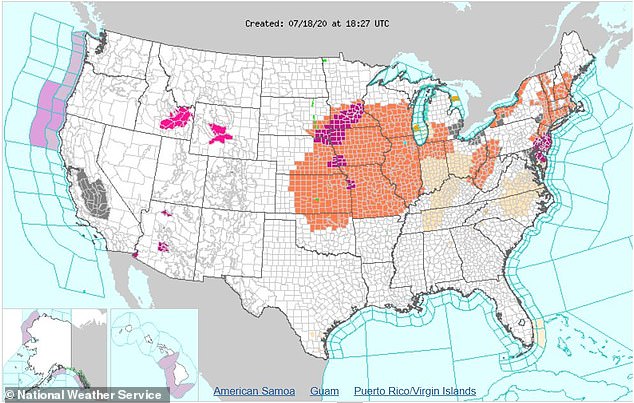 Increasing humidity brought forth with summer will likely cause heat index’s to top 100 for many areas,’ CBS News reports.

A graph shared by CBS Meteorologist and Climate Specialist Jeff Berardelli showed nearly all of the right half of the US experiencing temperatures over 90 degrees Fahrenheit this weekend.

While temperatures in the Northeast expected to cool off by mid-week, other places could experience the ‘oppressive’ heat wave for several days.

However, excessive heat warnings in the Midwest are set to end by Sunday despite temperatures staying consistently hot through the week. 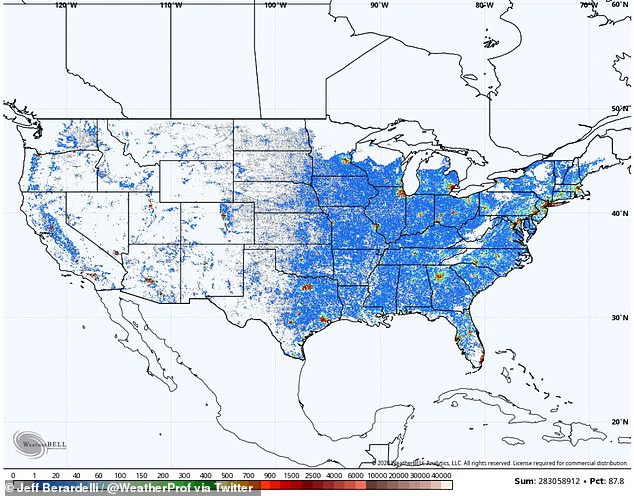 According to Meteorologist Jeff Berardelli, nearly 90 per cent of the continental US will have temperatures reach 90 degrees Fahrenheit or higher (pictured)

Some areas may experience heat indexes near 115 degrees due to ‘corn sweat,’ or when agriculture, like corn, adds humidity to the air.

In South Dakota, several local cities and counties were inundated on Saturday with a heat index expected to reach 109 degrees Fahrenheit.

The NWS Sioux Falls also revealed that the triple digit heat wave is less than 70 days away from the earliest recorded snowfall.

‘Enjoying the heat? Here’s a friendly reminder that it has snowed in Sioux Falls as early as September 25th. That’s just 69 days away.’ 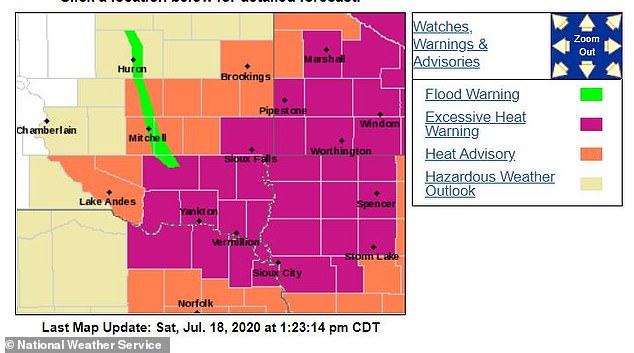 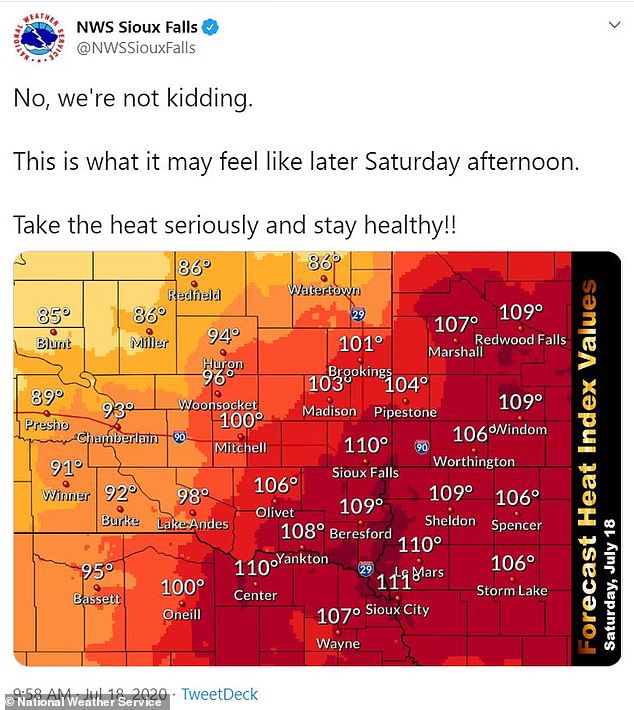 Local health officials have urged residents to stay safe and hydrated during the heat wave.

‘If you have someone thats been affected by the heat before, they are going to be affected quicker,’ Kevin Handke, Emergency Preparedness Coordinator, told KTIV.

He added that although heat cramps and heat exhaustion are both serious conditions, only heat stroke needs medical attention.

‘When it gets to that point its actually a true emergency for us because we can have our temperatures go up to 104 -105 which starts doing damage to the brain, and could also cause us to have a seizure,’ Handke said.

By Sunday, these triple digit temperatures should drop down to the mid-70s and upper 60s.

By 9am on Sunday, Sioux City residents will start their day at 79 degrees Fahrenheit, hit the mid-80s around noon and end back in the upper 70s.

Sioux Falls will wake up to 77 degrees Fahrenheit, transition to 81 degrees for lunch and end the day at 76 degrees. 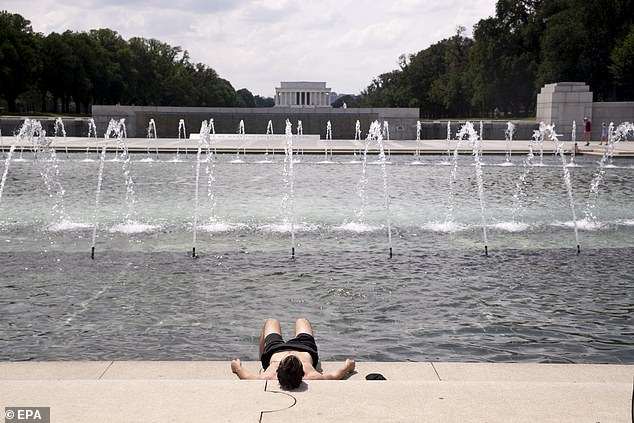 Pictured: A man dips his feet in the fountain water at the World War II Memorial on the National Mall

The advisory on Saturday will stay in place from 1pm to 8pm CDT.

One state below, Kansas was also issued both excessive and regular heat warnings that showed Kansas City overwhelmed with the weather.

In Kansas City, the afternoon will reach temperatures of 95 degrees Fahrenheit by 2pm, but the feel like temperature will be 15 degrees higher.

‘It is going to be the hottest day of the weekend, so really try to limit your time outside.’ the NWS Kansas City said.

The NWS added that the extreme heat felt in Kansas City will ‘significantly increase the potential for heat related illnesses, particularly for those working or participating in outdoor activities.’ 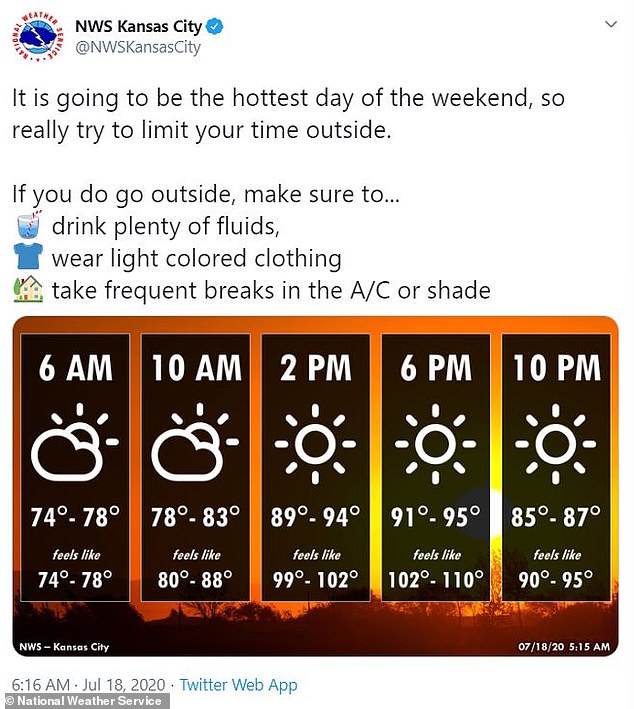 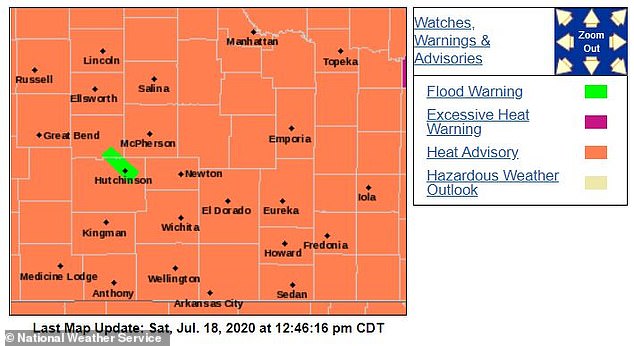 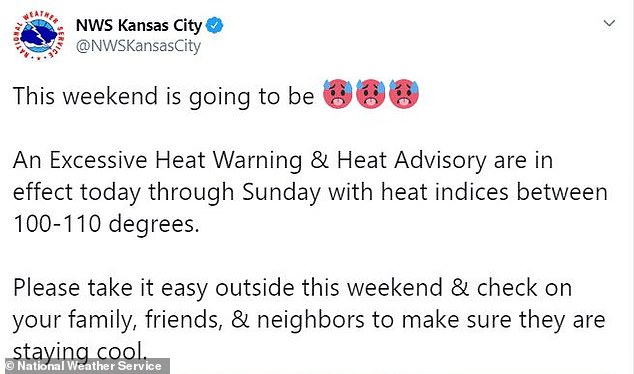 Temperatures in Kansas City will briefly cool off on Monday, but will reach the 90s again by Wednesday and continue into the weekend

Highs this weekend will be 98 on Saturday and 96 on Sunday.

The weather will briefly cool off on Monday, but will reach the 90s again by Wednesday and continued to climb into the next weekend.

‘Forecasts are calling for a wave of extreme heat in the coming days and I am urging all New Yorkers to make sure they are taking all necessary precautions,’ wrote Cuomo in a statement. 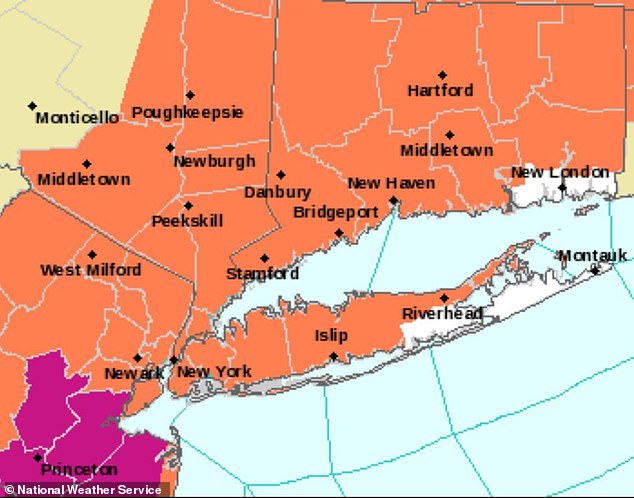 Areas in New York and Connecticut were among those with heat advisories, but just below New Jersey was given an excessive heat advisory 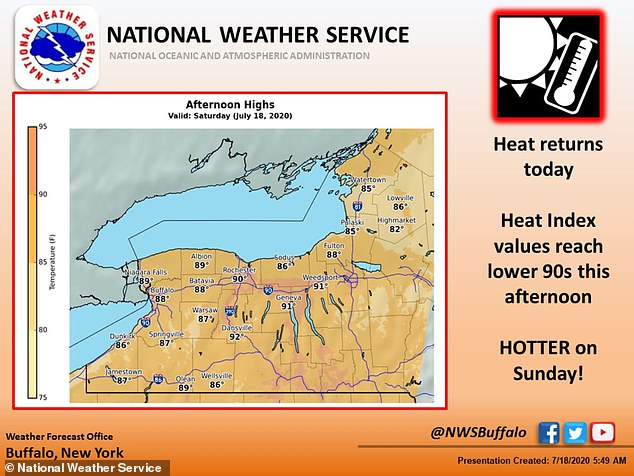 In Buffalo, heat indexes are set to reach between 95 and 100 degrees Fahrenheit this weekend

‘This type of weather can be especially dangerous for young children, the elderly and those with respiratory conditions.’

Although temperatures across New York aren’t expected to hit triple digits this weekend, several places have scorching temperatures in the upper 80s and 90s.

The city of Poughkeepsie appeared to have the highest temperature at 93 degrees Fahrenheit, followed buy cities like Syracuse and Alabany.

In Buffalo, heat indexes are set to reach between 95 and 100 degrees Fahrenheit.

‘The next 3-4 days has the potential to be our hottest stretch of weather for the year thus far!’ the NWS Albany wrote.

They added that they’re close to beating a local record this summer season.

The regular heat advisory in in various New York cities are scheduled to end on Monday, when temperatures will ease back into the 80s.

The excessive heat advisories for New Jersey and Philadelphia will also end on Monday. 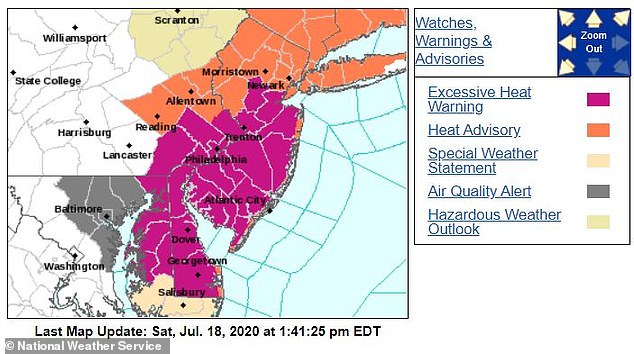 Philadelphia was also among those areas hit with extreme temperatures this weekend, but the advisory is set to end on Monday 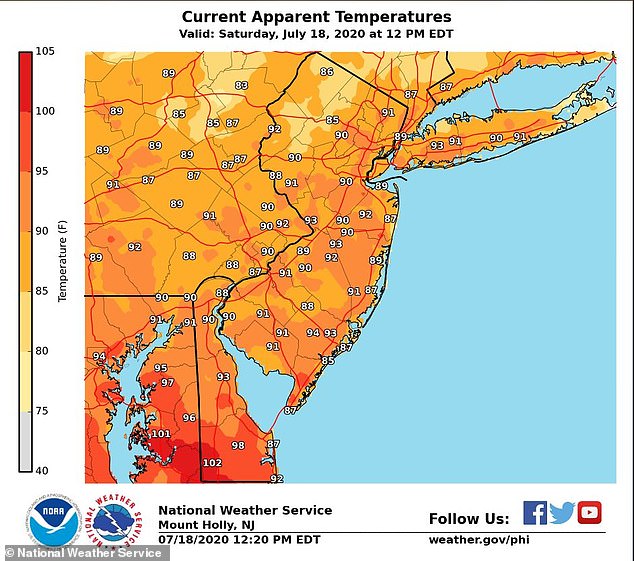 Additionally, some places this weekend may break local heat records.

The Washington’s Dulles Airport in Virginia, where mercury is expected to edge near 100 degrees on Sunday, could have the hottest air after a previous record in 1977 reached 98 degrees.

Reagan National Airport fell one day short of setting an all-time record streak of 21 days straight of temperatures at or above 90 degrees Fahrenheit.

But the streak re-started Friday when forecasts showed temperatures in the 90s for several days.