A mysterious and often fatal canine disease has now affected at least 173 dogs in Norway after authorities announced six new cases on Monday.

Norway’s Food Safety Authority (NFSA) said that the illness has killed 43 dogs in total and that they are still investigating its cause.

The NFSA said that a conclusion is still pending and so far nearly 90 different breeds have had similar symptoms, which include vomiting and bloody diarrhea.

Two dogs can be seen above playing in a park in Norway’s capital city of Oslo. Reports of the illness all first came from the capital city but sick dogs soon popped up across the country. Norway’s NFSA also said that nearly 90 different breeds had experienced similar symptoms which are bloody diarrhea and vomiting

The first cases were noticed among dogs in Oslo but dogs across the country have fallen ill since then.

The agency also recommended that dogs should be held on a leash, avoid close contact with other animals and not be allowed to sniff areas or eat anything where other dogs might have been.

Though there has been no official word on what it is that is making the pooches ill, CNN reported that autopsies revealed an abnormally high quantity of two types of bacteria post-mortem. 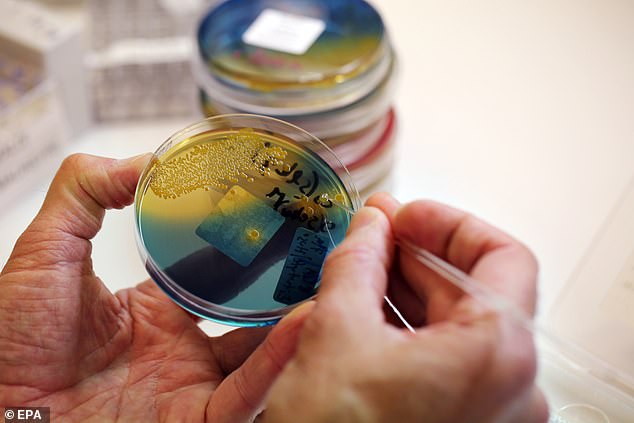 Bjarne Bergsjo, scientist and leader of the bacteriology laboratory at the Veterinary Institute in Norway, works in his laboratory in Oslo, Norway, 08 September 2019. Though scientists are working to find out what the cause of the illness is, they are yet to find a definitive answer. Autopsies from earlier this month revealed that there were high amounts of two types of bacteria which could point to the cause of the illness which has claimed the lives of 43 pooches

Norway’s Veterinary Institute, the NFSA and the Norwegian University of Life Sciences are working together to try to identify the cause.

The teams are involved in a nationwide co-ordination with veterinary practices and have sent out questionnaires to owners across the country.

As a precaution, dogs from Norway have been temporarily banned from canine shows in neighboring countries.

No cases have been reported outside Norway.