No action was taken in about 70 per cent of academic misconduct cases reported to the prestigious institution’s disciplinary unit in the last three years.

The data shows undergraduates were also investigated for forgery, offensive language or behaviour, and a breach of IT regulations.

The figures, released under the Freedom of Information act nearly a year after they were requested, showed there were four accusations of sexual harassment against students in the year 2016-17.

However, two were issued with letters, one case was settled through ‘mediation’, while the other had no action taken against them.

There were 13 staff discipline incidents during the same time frame – two of which related to sexual harassment and resulted in a formal warning.

A university spokesman said: ‘Sexual harassment covers a range of inappropriate behaviours, none of which are tolerated at Oxford University.

‘Students found to have committed any type of sexual harassment can face a range of sanctions, depending on the nature and seriousness of their behaviour.

‘These can include fines, suspension of study and in the worst cases, expulsion, but all disciplinary action is an extremely serious matter for the student concerned.

‘The sanction of a formal disciplinary letter, for example, goes on to the student’s record and can require demonstrable improvement in behaviour if they are to avoid further action.’ 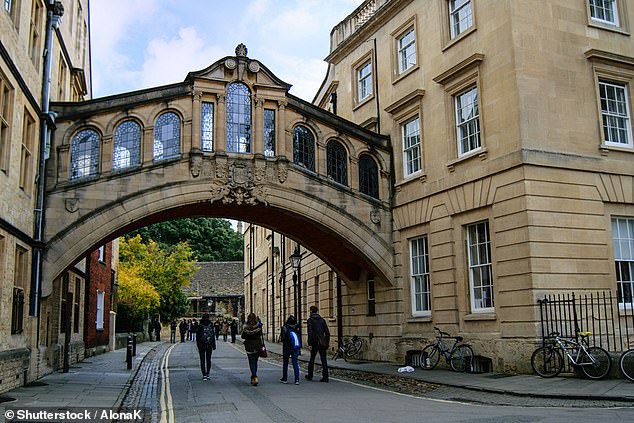 The data shows undergraduates were also investigated for forgery, offensive language or behaviour, and a breach of IT regulations (file image)

There were 171 allegations of unacceptable behaviour dealt with by the proctors’ office during the three-year period, of which 109 resulted in no action being taken.

Academic misconduct accounted for 123 cases, of which 88 had no further action.

The university currently has nearly 24,000 students.

The data relates only to formal reports made to the proctors’ office and does not include cases which have been dealt with formally at college level.

Data published last year showed there were seven incidents in total for student misconduct considered by the discipline committee at Cambridge University during the three-year time frame.

There were 31 staff investigations, according to the university’s own data, decreasing each year.