This is the shocking moment a scorned woman marched onto a football pitch and slapped her boyfriend after she discovered he was married.

A referee, stood to the side of the pair, blew his whistle to stop the match as she stormed towards him – grabbing and pulling at his shirt.

The enraged woman demanded answers from the football player as she followed him across the empty pitch.

The confronted man attempted to walk away as his girlfriend carried on with her furious tirade.

In footage of the attack, she shouted: ‘You’re married and still fooling around?’

She held onto his red shirt as he twisted and turned in a vain attempt to escape her grip.

The woman said: ‘I’m asking you a question! Are you married?

‘Your wife may not care, but I care! Are you married or not? Why are you doing this to me? Do I look like I’m easy to bully?’

The man reportedly hid the fact he was married, turning his apparent girlfriend into his mistress, the Mirror reported. 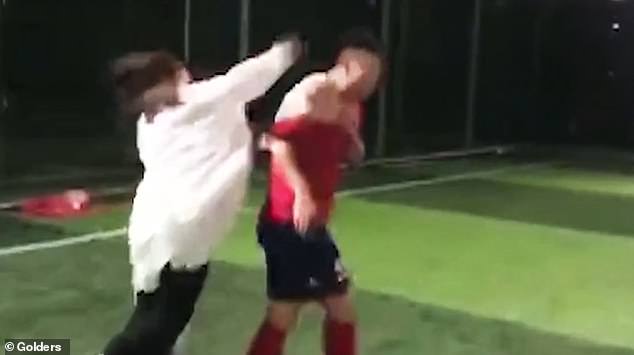 Footage, believed to be filmed in Chongqing, China, captured the moment she grabbed his shirt and dragged him around the pitch 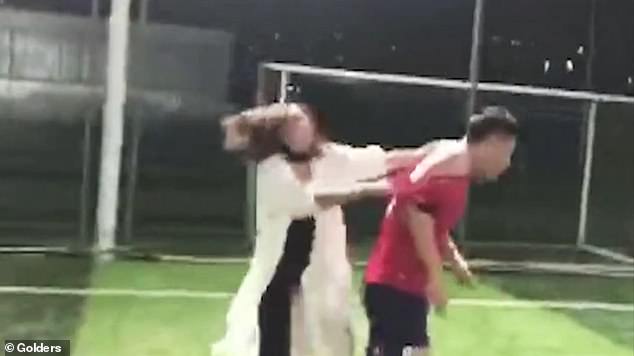 Towards the end of the clip, his teammates attempted to intervene – but they were quickly driven away

The footage, which was believed to have been filmed in Chongqing, China, continued to follow the furious woman as she dragged her boyfriend further across the grounds.

Towards the end of the clip, a few of his teammates attempt to intervene – but were quickly driven away.

The pair stood by a green fence at the end of the video – the man in question hiding his face as he’s held against the metal.

It is unclear how the incident ended.