Nicola Sturgeon today blamed Boris Johnson and Brexit for needing another  independence referendum by 2021 – despite four out of five Scots rejecting her new plan.

Only 24 hours after the First Minister accelerated her crusade to break up Britain, a survey revealed she is ignoring the views of the vast majority of Scots.

The poll found 61 per cent of Scots want the country to remain part of the UK amd critics say it will be a ‘hammer blow’ for Ms Sturgeon, who claimed polling evidence has shown a shift in support for another vote.

But she ploughed on today and said: ‘Scotland needs protection from Brexit and Boris. I think Boris Johnson as prime minister would send not just people in Scotland, but many people across the whole of the UK, into utter despair.

‘Boris Johnson, not single-handedly but largely, is responsible for the complete mess the UK finds itself in.’

In a new blow for Nicola Sturgeon, a new poll has found that her plan for indyref2 in two years is not popular with Scots 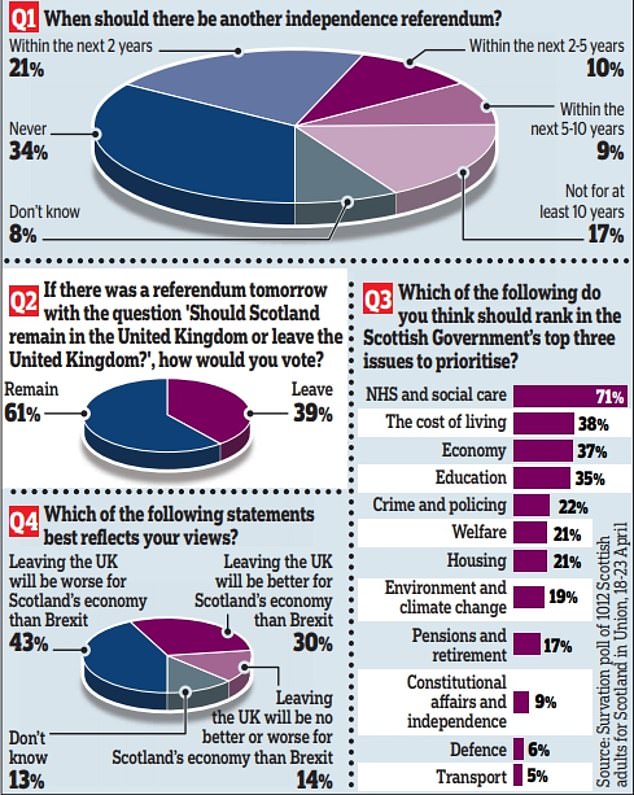 Last night’s ‘bombshell poll’ also found fewer than one in ten thinks independence should be one of the top three priorities for the Scottish Government – meaning it lags behind tackling the NHS, the cost of living and the economy.

But today Ms Sturgeon insisted in her Holyrood statement that if Brexit does go ahead, their should be another vote on Scotland’s place in the UK before the next Holyrood elections in May 2021.

‘We can only plan on the basis that the UK is still going to be taken out of the EU, that is what the UK Government is planning to do,’ the First Minister told BBC Radio Scotland.

The SNP’s 2016 election manifesto made clear another referendum should be held if there was to be a ‘material change in circumstances’ from the original ballot in 2014. 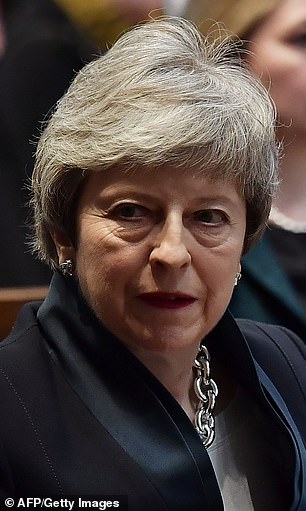 It cited Scotland being removed the from EU against the wishes of its people as one example of this, but speaking on the Good Morning Scotland programme Ms Sturgeon said: ‘Many people would say there has been a big material change of circumstances in the way Scotland has been treated over the past few years.’

If Remainers do manage to halt Brexit, she said she would give her views then on what should happen next.

The SNP leader however stated: ‘We could be facing the prospect of Boris Johnson as prime minister in a matter of months. I’m not going to start to narrow Scotland’s options.

‘The important thing over this next period, with such fundamental change happening in the UK that is not in Scotland’s interests, is that Scotland has maximum options to chart its own way forward.’

Theresa May’s deputy, David Lidington, yesterday confirmed the UK Government will not grant a Section 30 order to allow the Scottish Government to hold a referendum.

Pamela Nash, chief executive of Scotland in Union, said: ‘This bombshell poll proves that Nicola Sturgeon is refusing to listen to the people of Scotland. In a hammer blow for the SNP, only a fifth want a divisive second referendum within two years – and more than half say there should not be one for at least a decade.

‘It’s no surprise support for leaving the UK has fallen to below 40 per cent, with many former Yes voters changing their minds. They have seen how difficult the Brexit process has been and know we are stronger together.

‘The people of Scotland want Nicola Sturgeon to get back to her day job and focus on fixing our hospitals, schools and the economy and drop her obsession with breaking up the UK.’ 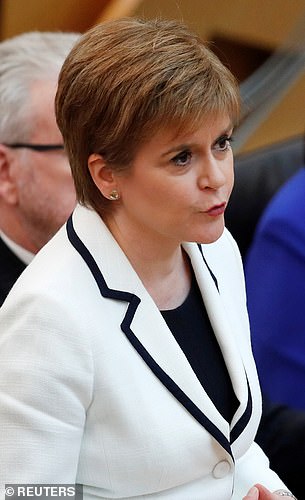 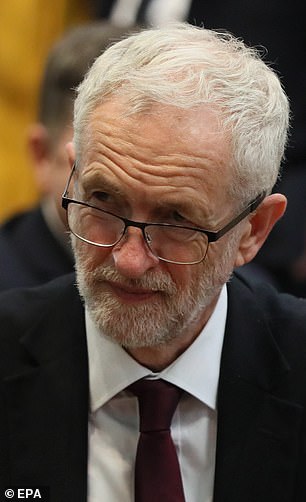 It revealed only 21 per cent of respondents want another referendum within two years, the timetable announced by Miss Sturgeon.

This is one percentage point lower than in a Survation poll for the Scottish Daily Mail last month.

First Minister Nicola Sturgeon has said she would not hold a referendum without Westminster’s permission. She could choose to hold a non-binding vote, however, to pile pressure on the Government.

The SNP may try to launch a legal battle.

A further 10 per cent supported a referendum within two and five years, while 60 per cent said it should not happen for at least another five years – including 34 per cent who said there should never be another vote. The poll also revealed that, if asked whether Scotland should remain in the United Kingdom or leave, 61 per cent backed Remain while only 39 per cent supported Leave.

When asked which of 14 issues they rated in their top three priorities, only 9 per cent said constitutional affairs, the third-lowest figure.

In comparison, 71 per cent said the NHS and social care, 38 per cent the cost of living, 37 per cent the economy and 35 per cent education.

‘That’s all the evidence Nicola Sturgeon should need to take this threat off the table. But instead she ploughs on, ensuring Scotland is subjected to yet more division and uncertainty.

‘A responsible Scottish Government should be seeking to bring the country together, not drive another wedge through it.’

On Wednesday, Miss Sturgeon said there should be a second vote on Scotland’s future in ‘the lifetime of this parliament’, until 2021.

SNP deputy leader Keith Brown said: ‘This poll has backfired in spectacular style for Scotland in Union – who are clearly running scared of giving people in Scotland the choice over their future.

‘This poll shows almost two- thirds of people back another referendum and a majority think Scotland would be better off or no worse off with independence. That’s a great vote of confidence in the benefits of taking our future into our own hands.

‘Despite their best efforts in employing a skewed question on support for independence conducted before the First Minister’s announcement this week, Scotland in Union have done us a huge favour.’