Scott Morrison is flying to the Queensland Outback today to help drought-stricken farmers.

The Prime Minister, who has been criticised for not doing enough for rural communities, will announce $100million in aid.

The money will go to 13 local government areas to help farmers pay for food, water and fuel and have access to counselling.

Mr Morrison will land in Sydney after his state visit to the US and will immediately take a flight to Dalby in south Queensland.

He said: ‘We know we can’t make it rain, but we must keep finding ways to do everything we can to make life just a bit easier and remove some of the burden.’

‘The farmers have become Scott Morrison’s forgotten people,’ he said.

‘No real action on his part despite the fact that it’s very, very clear based on all the advice that this thing is not going to get better any time soon.’

Amanda Bolton, who runs Birkwood Farm in the Queensland town of Mutdapilly, posted a photo to Facebook of her dried-up dam.

‘The Australian Prime Minister has just announced that the Australian government will be contributing 150 MILLION dollars to the upcoming Mars missions,’ she wrote.

‘Worst drought in recorded history, a number of regional towns will run out of water within weeks, record bushfire season, record dust storm activity etc… This country is desperate. 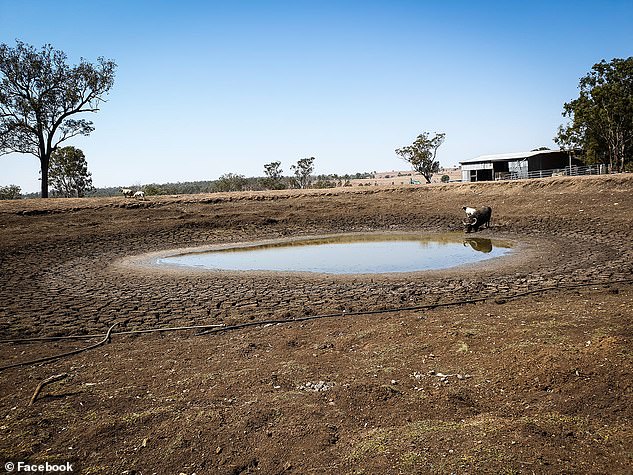 The deal between the Australian Space Agency and NASA was announced in Washington DC on Saturday.

Ms Bolton’s confronting post has been shared more than 50,000 times with thousands of Australians slamming Morrison for turning his back on battling farmers.

‘Scott Morrison, please pay attention, stop rubbing up to that Trump moron and look after our farmers. They die, we die,’ one person wrote.

‘Too busy making himself look good on the World Stage while a major portion of his own country is if not dead its dieing! (sic),’ read another comment.

‘Our farmers & water supply should be number one priority. Secondly helping the homeless- so many people living in cars sleeping bags tents with very little food. We are fast becoming a third world country.

‘This government should be putting Australian first . But No he just wants to waste money on keeping trump happy.’

A social media campaign imploring the prime minister to step up to the plate for farmers has been gaining traction.

‘Why? Because we want ATTENTION and we need help. We want Scott Morrison to see this.’

Australia is currently on the grips of the most severe drought on record. 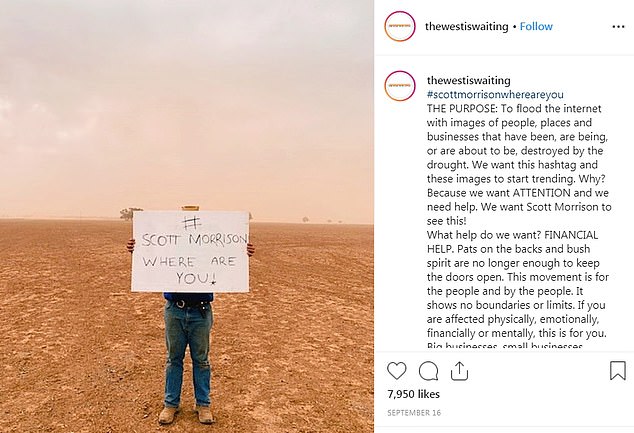