The road back: Scott Morrison reveals his three-step plan to lift lockdown and says restaurants and cafes will be first to open – but warns ‘there will be outbreaks and more cases’

The current national baseline rules will be relaxed in three stages, with less risky activities such as sport and dining out starting before more dangerous ones such as clubbing and going to the cinema.

But the newly-developed ‘roadmap’ will only guide state and territory leaders, who will then decide when to implement each stage in their own jurisdictions.

Mr Morrison estimates the plan can restore 850,000 jobs – after one million were lost due to the lockdowns.

Under the first step, gatherings of up to ten people will be allowed and cafes and restaurants can re-open with a maximum of ten people at one time.

‘It will see children back in classrooms and in play grounds in their communities. Golfers back on the green. Lap swimmers back in the pool. Boot catch camps back in the parks. Retail and small cafes and restaurants reopening,’ Mr Morrison said.

Working from home will still be encouraged where possible.

The second stage will allow gatherings of up to 20 people. Gyms, cinemas, and beauty therapies can restart as well as some inter-state travel.

Step three involves opening up most of the economy with gatherings of up to 100 people.

Pictured: People walking along a path in Burleigh Heads 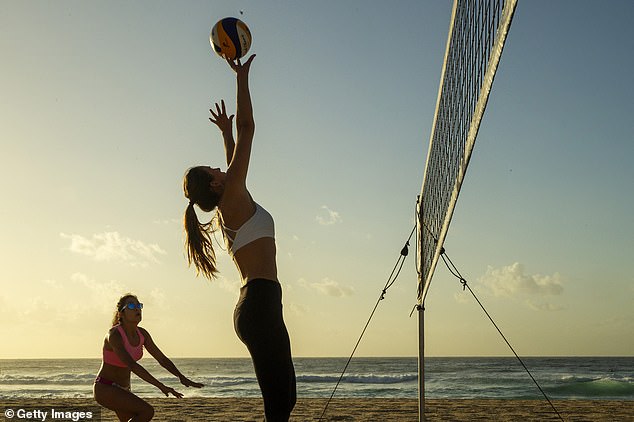 A ‘roadmap’ showing the way out of lockdown was presented to Australians on Friday. Pictured: Volleyball on Sydney’s Bondi Beach in March