Plans for Australia’s Covid-19 vaccine rollout have been abandoned, as Scott Morrison admits that many may be forced to wait until next year to get even their first jab.

Despite earlier assurances on Sunday from Trade Minister Dan Tehan that the government aimed to vaccinate all Australians by the end of 2021, Mr Morrison took to social media to clarify ‘such targets’ had not been set.

‘While we would like to see these doses completed before the end of the year, it is not possible to set such targets given the many uncertainties involved,’ the Prime Minister wrote on Facebook.

‘We will just get on with the job of working together to produce, distribute and administer the vaccines as safely and efficiently as possible.’

The government has already implied on several occasions that Australians will be be unable to fly abroad for the first time since March 2020 without being fully vaccinated, with airlines including Qantas set to demand customers have their jabs.

Scott Morrison has warned some Australians may have to wait until next year to get their first coronavirus vaccination. Pictured  is a Townsville nurse getting the jab in early March 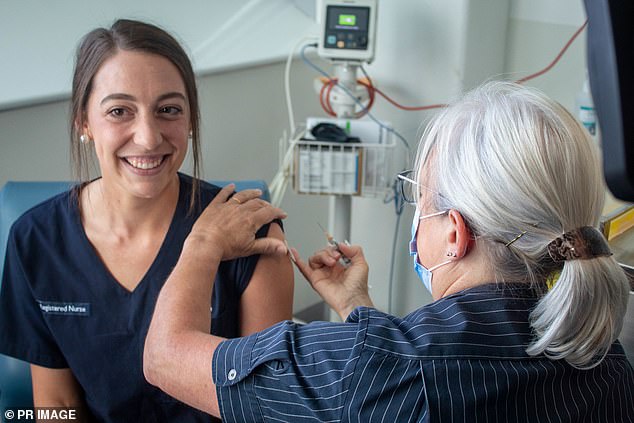 The Federal Government has been forced to change its Covid-19 vaccine timetable after concerns over the AstraZeneca jab through the rollout into doubt (pictured, a nurse in Tasmania receives her Covid-19 vaccine in February)

The Federal Government’s heavily-criticised Covid-19 vaccine rollout had already been thrown into further chaos amid confusion over a revised timeline to have every Australian inoculated.

Blood clot fears over the AstraZeneca jab forced a rethink of the nation’s vaccine program, but a further 20 million doses of the Pfizer jab are due to arrive in the last few months of 2020.

‘That is definitely the aim, that is the goal we have set – trying to have all Australians have a dose by the end of the year,’ Mr Tehan told Sky News on Sunday afternoon.

But Health Minister Greg Hunt also appeared to walk back Mr Tehan’s comments just hours later while holding a press conference by refusing to commit to a timeframe.

‘There’s been no change in our permission as the Prime Minister said and our goal is to ensure that every Australian is vaccinated as early as possible,’ Mr Hunt said.

The Government’s vaccine program – criticised for being too slow – suffered a major setback last Thursday after health authorities recommended the AstraZeneca vaccine should only be given to people over 50 due to the risk of blood clotting. 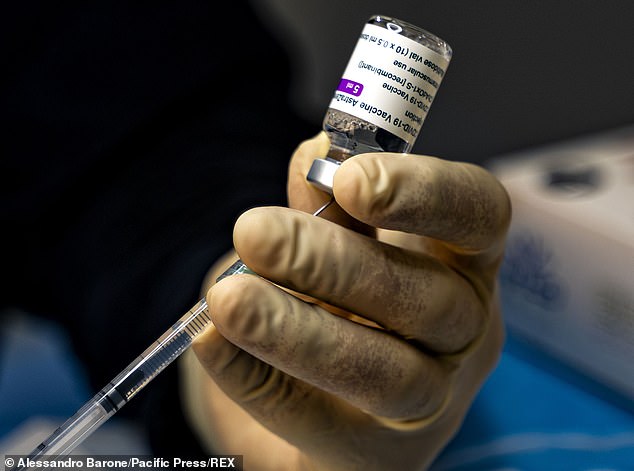 The AstraZeneca jab was the vaccine the government was relying heavily on, but it has since secured an additional 20million Pfizer vaccine doses that will be shipped from overseas later in the year.

The Pfizer vaccine is now the preferred vaccine for those aged under 50.

Prime Minister Scott Morrison originally planned to have all Australians vaccinated by October.

Mr Tehan had warned while speaking to Sky News the world was still under the cloud of a pandemic and things could quickly change.

‘But I think Australians understand… when you’re dealing with the pandemic, there are a lot of unknowns and you have got to make sure you set your goals and are prepared to adjust those as things occur,’ he said. 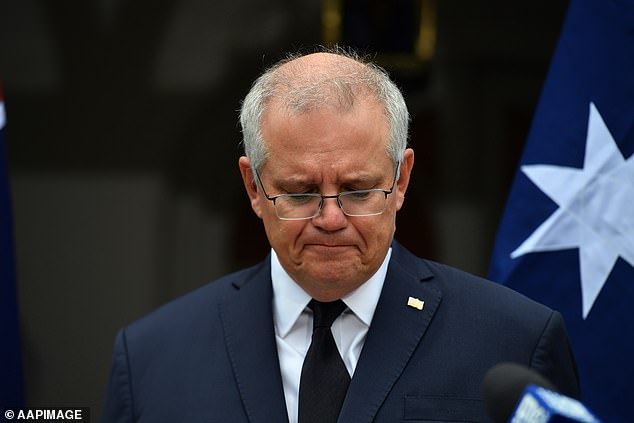 ‘While we would like to see these doses completed before the end of the year, it is not possible to set such targets given the many uncertainties involved,’ Scott Morrison (pictured on Saturday) admitted on Sunday night 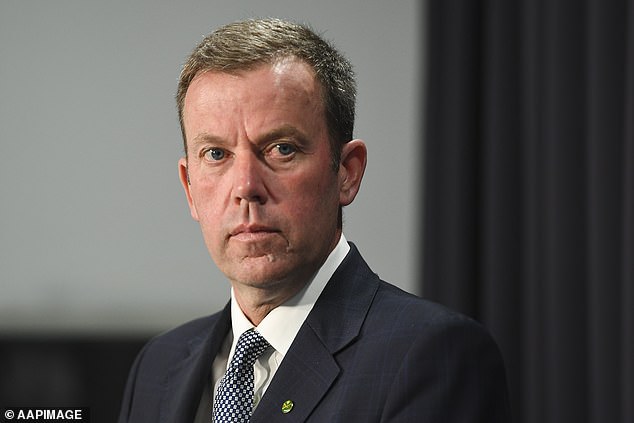 In an indication of just how quickly things can change, a government spokesperson also told AAP there had been no change in the government’s position from last week, where there was a reluctance to commit to a timetable for delivering the vaccine.

‘We await further advice from the medical experts about potential timeframes, but our goal is to ensure every Australian is vaccinated as early as possible,’ the spokesperson said.

Australia has just passed the one million mark in terms of vaccinations, well short of the four million Mr Morrison originally promised by the end of March.

In the last 24 hours, 88,500 new vaccine doses were administered, bringing the total number inoculated to 1.16million. 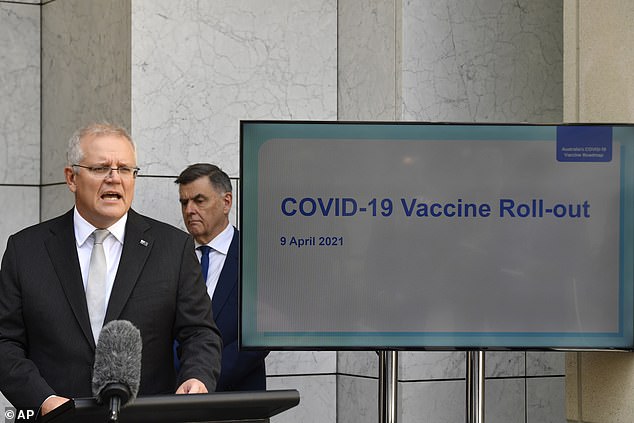 Prime Minister Scott Morrison (pictured, flanked by Department of Health Secretary Dr Brendan Murphy) had been aiming to have every willing Australian receiving their first Covid-19 vaccine dose by the end of October

Mr Hunt said there were now 4000 GP clinics across the nation taking part in delivering the vaccine.

‘We’ve reached that figure of 4000 (general practices and Aboriginal controlled health services administering vaccines) earlier than expected and that’s because of the heightened level of participation of our GPs.’

Mr Hunt added the Government had indemnity agreements for vaccines.

‘Our advice is very clear that doctors are protected by the government indemnity agreement, against any side effects which flow from the blood clots themselves,’ he said.

Labor’s health spokesman Mark Butler said the Government should have secured more vaccine deals to ensure there was a backup when something like the AstraZeneca situation arose. 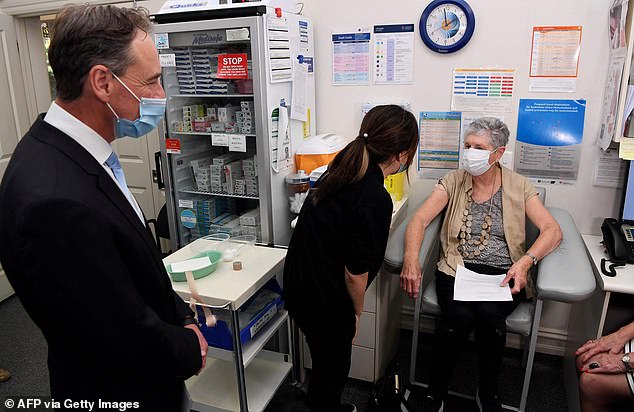 ‘Australia was already way behind schedule in the vaccine rollout, not in the top 100 nations in the world and a bad situation has been made far worse by these unforeseen events around the AstraZeneca vaccine.’

Meanwhile, Mr Tehan will embark on a ‘vaccine diplomacy’ trip to Europe from Wednesday.

He will speak with the European Union and his ministerial counterparts in France, Germany and Brussels.

‘I will also be meeting the director general of the World Trade Organisation to talk about what we can do to ensure supply of the vaccine, not only for Australia, but globally,’ Mr Tehan said.

Pacific nations will soon have shots of the AstraZeneca vaccine manufactured in Australia to distribute, with the Government promising to export 10,000 doses a week.

The Government said it will start with hard-hit Papua New Guinea and Timor-Leste.

Fiji, the Solomon Islands and Vanuatu will also begin to receive doses in the coming weeks.

In a joint statement, Mr Hunt, Foreign Minister Marise Payne and Minister for International Development and the Pacific Zed Seselja said: ‘Our region’s health security and economic recovery is intertwined with our own.’

Premier Annastacia Palaszczuk said there was one case believed to be an historic link to the recent Byron Bay cluster and was under investigation, adding it was not a risk to the community.

Victoria and NSW have reported no new Covid cases in the past day.