Only Scott Morrison – and not an accident-prone cabinet minister or a hardline attorney-general – can convince 40 per cent of Australians to sign up to the TraceTogether app.

The Prime Minister’s own government MPs, including a former police officer no less, are worried about the erosion of privacy and freedom as it’s rolled out next week.

So it’s little wonder many Australians are concerned about giving the state more details on their everyday movements outside of their own homes.

Police in recent weeks have taken advantage of the grey areas around the rushed COVID-19 public health orders to fine people for sitting on a park bench or eating a kebab after a workout  – despite exercise being allowed during the lockdowns.

Australians are now being told that if they want coronavirus restrictions eased, in as little as three weeks, they must sign up to a tracing app that uses Bluetooth technology to determine whether someone they have come in contact with has tested positive to COVID-19.

Convincing 40 per cent of Australians to download the program is a big ask, considering just 20 per cent of people were prepared to do so in authoritarian Singapore, where the app was developed.

This is why Mr Morrison, and not his embattled Government Services Minister Stuart Robert, needs to make the case for the app.

This task can’t be left either to Attorney-General Christian Porter, whose career has included taking a hard line on law and order in Western Australia and giving police the power to access encrypted data as part of last year’s federal anti-terror laws.

Mr Morrison also needs to explicitly explain why and how police and intelligence agencies will be prohibited from ever accessing the data under any circumstances so the public has confidence their data will not be used against them.

He also needs to guarantee none of the TraceTogether data will be admissible in court – whether someone is charged with breaching a COVID-19 restriction or brought before the law for an unrelated offence.

On March 24th, the day the business shutdowns saw tens of thousands lining up outside Centrelink, Mr Robert made the extraordinary and tone-deaf remark that he didn’t realise coronavirus would cause so many job losses. 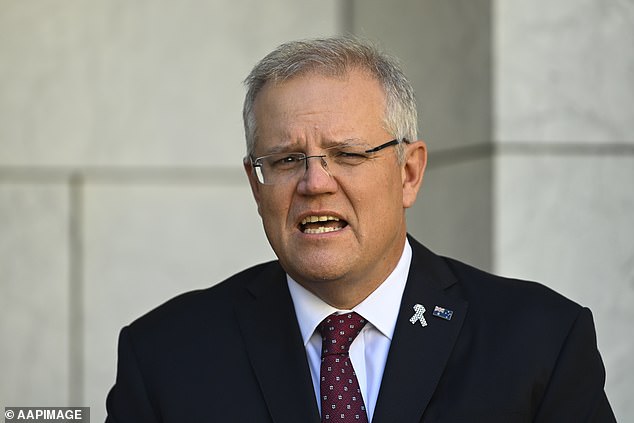 Prime Minister Scott Morrison (pictured in Canberra on April 23, 2020) needs to explicitly explain why police and intelligence agencies will be prohibited from accessing the data so the public has confidence in the legal system

Last week, he was even more unconvincing when he promised the data would be deleted after the pandemic was over.

‘At no point does the commonwealth get the data, at all and when the pandemic’s done, I delete the app and all data from my phone and then I the minister will blow away the national data store and therefore no data will be kept for individual citizens,’ he said on April 18.

Civil libertarians in Australia aren’t the only ones concerned about privacy, with former deputy prime minister Barnaby Joyce and his Nationals colleague Llew O’Brien, himself a former Queensland police officer, declaring they would not install TraceTogether.

Mr O’Brien, the deputy speaker, said was a  ‘snowflake’s chance in hell’ he would use the app.

The regional MPs have taken an even more strident position against TraceTogether than even the Australian Council for Civil Liberties, which in fact supports that app provided police are banned from accessing the data. 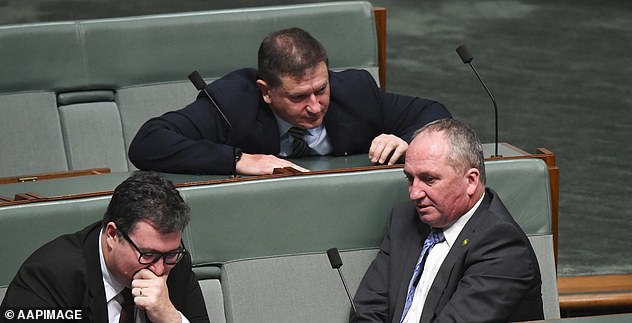 The Prime Minister’s own government MPs are worried about the erosion of privacy and freedom. Former deputy prime minister Barnaby Joyce (right) and his Nationals colleague Llew O’Brien (top), himself a former Queensland police officer, declared they would not install TraceTogether

The government has heeded the concerns of leading civil libertarians like Terry O’Gorman, and flagged introducing legislation to restrict data access to healthcare professionals.

‘Law enforcement agencies will not be provided access to information collected via the app,’ Mr Porter told Daily Mail Australia.

‘Specific regulatory action will be taken to prevent such access for law enforcement agencies at both the commonwealth and state/territory level.’

Like the legal profession, opinion polls show Australians accept manual contact tracing is slow and cumbersome and want technology deployed to tackle the worst global pandemic since the Spanish flu killed 50million people worldwide between 1918 and 1920.

Since late last year, COVID-19 has infected more than 2.6million people globally, killing 183,424 including 74 in Australia.

‘There is a major plus in taking it up – it is a once-in-a-one-hundred year pandemic and the civil liberties council supported moves we otherwise would not have supported because of the extreme health dangers caused by it,’ Mr O’Gorman said.

This requires trust, consent and goodwill – which should not be abused. 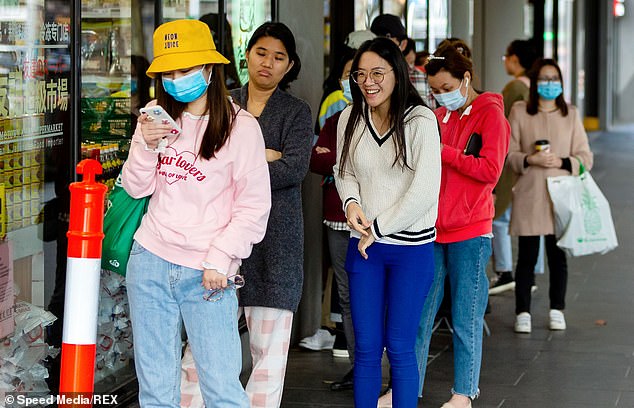 So it’s little wonder many Australians are concerned about giving the state more details about their everyday movements outside of their own homes. Pictured are shoppers in Australia 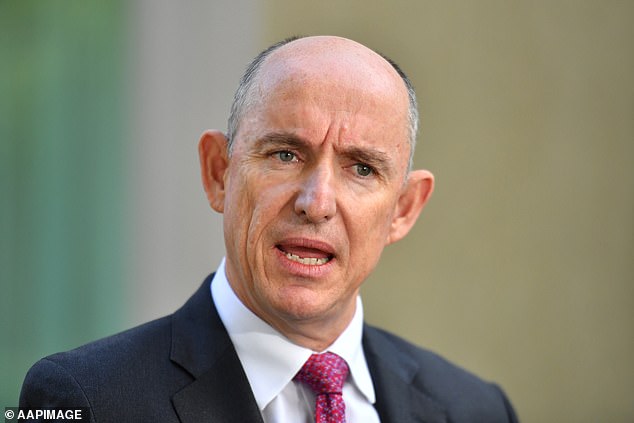 Stuart Robert has made a series of blunders highlighting why he shouldn’t be the chief salesman for an app that will trace the everyday movements of Australians.

The Government Services Minister, 49, has been a magnet for controversy during his two stints on the front bench under three Liberal prime ministers.

They range from being forced to resign for having shares in a Chinese-linked mining company to clashing in front of the TV cameras with his former boss Tony Abbott’s chief-of-staff Peta Credlin during the 2013 election campaign.

A month ago, he suggested he had no idea the forced closure of non-essential businesses, like pubs, clubs and gyms, to stop the spread of COVID-19 could leave so many people out of work.

Under his watch, the myGov website and Centrelink hotline had struggled to cope, as economists feared one million people had lost their jobs without much warning in just one week.

‘My bad, not realising the sheer scale of the decision on Sunday night by the national leaders that literally saw hundreds of thousands, maybe a million, people unemployed overnight,’ he told Sydney radio 2GB on March 24.

He had earlier wrongly blamed a cyber attack for the website failure.

‘I probably should have waited for the investigation before jumping the gun,’ Mr Robert said.

Four years ago, then prime minister Malcolm Turnbull forced him to resign as human services minister after it emerged he had shares in a Chinese-linked mining company, Nimrod Resources, that also donated money to the Liberal Party.

Mr Turnbull’s successor Scott Morrison brought Mr Robert back from the backbench in August 2018, after he did the numbers for him to stop right-wing Home Affairs Minister Peter Dutton, a fellow Queenslander, from leading the Liberal Party.

As the new assistant treasurer, he proved to be a disaster, charging taxpayers $2,832 a month to have the internet connected to his Gold Coast hinterland house – at a cost 31 times higher than the typical $90 a month bill for fast, National Broadband Network access.

Bizarrely, as a backbencher in May 2018, he told parliament the 10 per cent GST should be scrapped on luxury super yachts.

He became defensive when Daily Mail Australia contacted him about his House of Representatives speech – made only 10 days after receiving two free tickets to the Sanctuary Cove Boat Show in the exclusive millionaires’ row gated suburb of Hope Island.

‘Don’t be stupid or I’ll just hang up. Don’t be an idiot. I’ve been pushing this issue for years,’ he said by phone.

The junior cabinet minister, who entered Parliament in 2007 in the same intake as Mr Morrison, has struggled to sell the idea of Australians installing the TraceTogether app on their mobile phones.