The coronavirus pandemic will hit the economy ‘like a truck’, Scott Morrison said today.

The Prime Minster warned the crisis will bring the biggest economic shock since the Great Depression of the early 1930s.

‘The GFC was an entree compared to what this is. This is on a whole other level,’ he told Melbourne’s 3AW radio.

Australia’s unemployment rate will keep deteriorating into 2021 as the coronavirus shutdown forces more retrenched workers to queue up outside Centrelink, experts say. Pictured are long lines at Darlinghurst in Sydney’s east

Treasury officials are expecting Australia’s unemployment rate to hit 10 per cent by the end of June, a joblessness level unseen in Australia since April 1994.

‘On the economy we have some really bad news coming our way… this thing is going to hit like a truck,’ the Prime Minister said.

Mr Morrison was asked if new taxes would have to be increased to pay for the government’s extraordinary spending programs such as the JobKeeper scheme to pay six million workers’ wages.

But he said he planned to focus on policies that would facilitate growth such as lowering taxes and reducing red tape.

‘We’re going to have to look at growing the economy. Increasing taxes doesn’t always grow the economy.’ 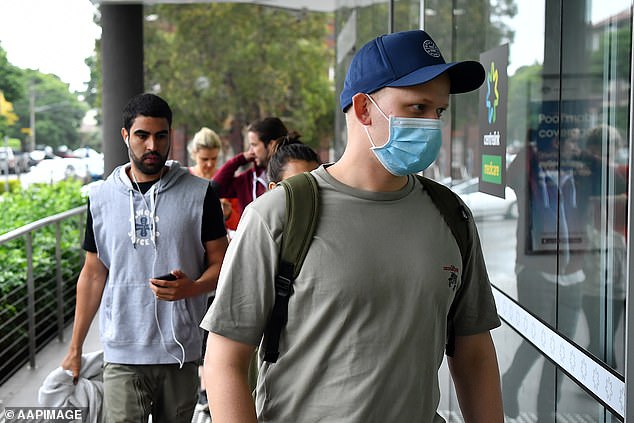 The worsening shutdown of the economy could see the jobless rate double to 10 per cent within six months and triple to 14 per cent within a year, leaving two million people out of work as Australia went into recession for the first time in three decades. Pictured are people outside Centrelink at Bondi Junction in Sydney

‘We’ve got to get our economy up and humming. That’s how you get people back into work. And when people are back in work, then they are paying taxes.’

The Prime Minister said on Thursday that Australia’s testing regime will be massively beefed up over the next four weeks to prepare for the end of lockdown.

Part of that plan will involve testing people who work in certain ‘at risk’ occupations even if they have only ‘basic symptoms’, Mr Morrison said today. 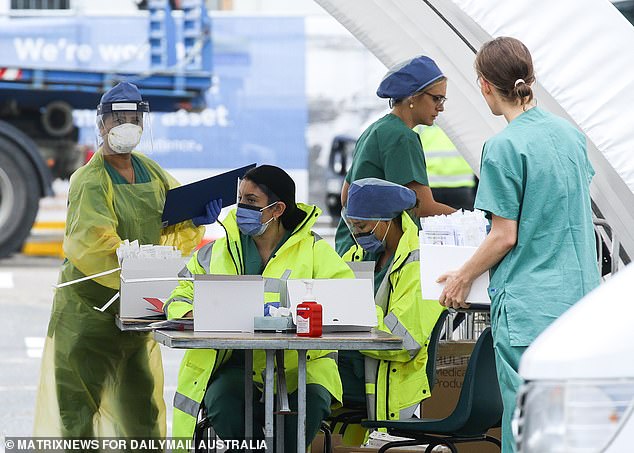 Health care workers, retail employees and possibly teachers could soon qualify for coronavirus testing even if they have no symptoms. Pictured: A testing centre in Bondi

Asked who would be the target of the broader testing regime, the Prime Minister told Triple M Hobart: ‘There are particular occupations which are more at risk.

‘Health care workers, retail workers, those sorts of jobs where they are more at risk and have basic symptoms that wouldn’t normally qualify.’

The Prime Minister said teachers were not at risk because children are less affected by the virus.

But he said: ‘I think broader testing among teachers would be a good thing’ to help put staff at ease.

Mr Morrison said tests will be made available in more suburbs and localities so that any local outbreaks can easily be identified. 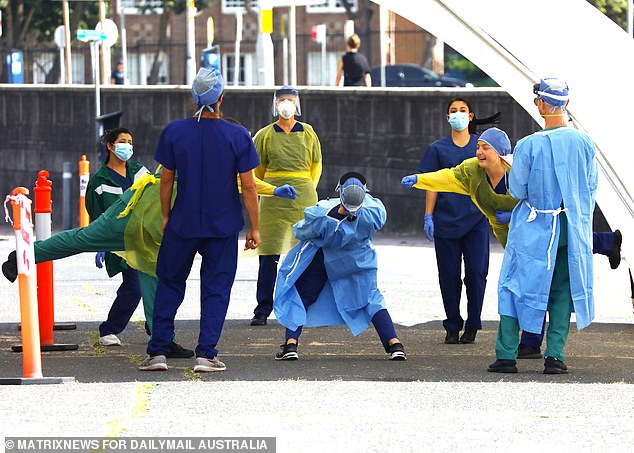 Prime Minister Scott Morrison said Australia’s testing regime will be massively beefed up over the next four weeks to prepare for the end of lockdown. Pictured: A testing centre in Bondi

He also said he wants a new tracing app that can show a patient’s recent contacts to be optional – but did not rule out forcing people to download it if less than 40 per cent of the nation sign up.

Wider testing, more rigorous contact tracing involving an app and plans for local lockdowns to combat outbreaks need to be in place before so-called ‘baseline restrictions’ can be removed across the nation, Mr Morrison said on Thursday.

But Australia’s most populous states will be able to relax some of their harsher restrictions sooner if they chose to do so.

‘States and territories that went further than those baselines… will be reviewing those in the meantime,’ Mr Morrison said. 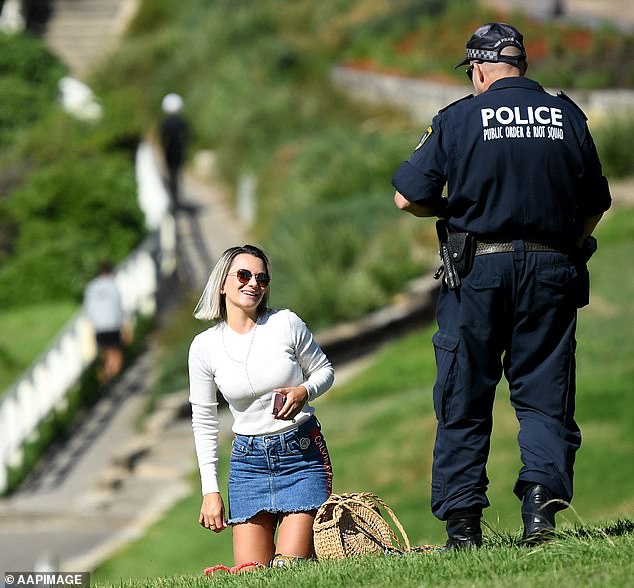 There were only 30 new cases of coronavirus in Australia on Thursday, taking the national total to 6,479. The crisis peaked at 460 daily cases on 28 March.

The Prime Minister said over the next four weeks the government will work on measures to make it safe for restrictions to be lifted.

So far only certain ‘hotspot’ suburbs have made testing available to everyone due to a shortage of testing equipment including chemicals – but the government wants to expand the testing regime.

The government is working on an app that can tell people if they have come into contact with someone with the virus – but there are ‘privacy concerns’ to work through before it can be rolled out.

It will be similar to the trace app rolled out in Singapore, Mr Morrison said. 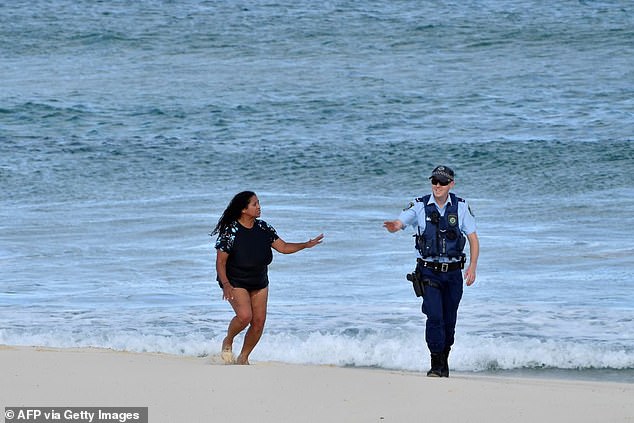 The Prime Minister said the government is working on an app that can tell people if they have come into contact with someone with the virus – but there are ‘privacy concerns’ to work through before it can be rolled out.

It will be similar to the trace app rolled out in Singapore, Mr Morrison said.

Singapore’s TraceTogether app uses Bluetooth on mobile phones to link up with other phones nearby.

If officials then need to call upon this data, they can determine a person’s close contacts based on the proximity to another person and the length of time spent with them.

Mr Morrison said: ‘The trace app which has been put in place in Singapore is a consent based model and the reason we are not quite ready yet is we are still working through ensuring that it meets the privacy protections.

‘It is a complex area, but it is a tool that Australia will need to pursue the road out of this that we would like to pursue.’

Thirdly, the Prime Minister said there need to be measures in place to rapidly re-introduce restrictions in certain areas if outbreaks occur, such as the one in north-west Tasmania.

Two hospitals there were closed this week after 45 medical workers and nine patients caught the disease. Extra soldiers and medical personnel were deployed to the area.

‘You can’t rule out increasing potentially restrictions at some point if things got a bit out of control because the virus writes its own rules,’ Mr Morrison said.

Mr Morrison said social distancing and hand washing will be in place until a vaccine is found.

He also warned that Australia needs to brace for economic strife ahead – and flagged the government will adopt pro-growth policies such as lower corporate tax to help Australia recover.

It comes as schools in New South Wales plan to use a roster system to bring some children back to class. 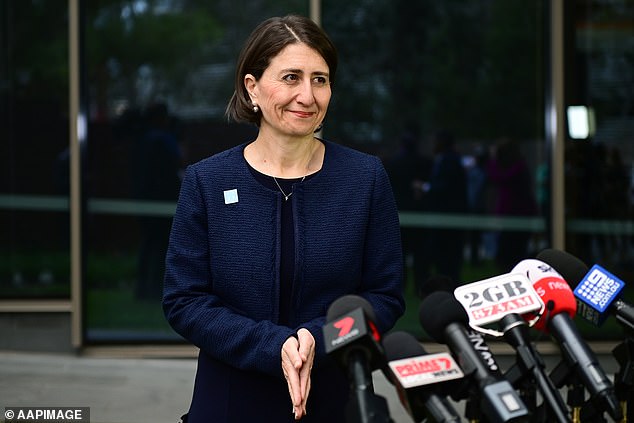 Schools in New South Wales will use a rota system to bring some children back to class, Premier Gladys Berejiklian (pictured) said today

Today she clarified that not all students will go back to class at the same time.

A roster system is being designed so some children attend on certain days and work from home on others when their peers go to class.

‘Students will not be in school full-time and I suspect the majority of learning will still be from home,’ Ms Berejiklian said.

Victoria has no plans to re-introduce face-to-face teaching.

He said around three per cent of students were going to school and the rest were at home.

Schools are open for children who cannot learn from home if their parents have to go to work.

Australia’s health experts say it is safe for children to go to school because, for an unknown reason, the virus does not affect them as much as adults.

All states and territories, except the Northern Territory where attendance is compulsory, have made school optional or told parents not to send children to class during the pandemic.