The suit, filed in a New York district court on Monday, claims that in July 2013, Payne ‘pressured his way’ into Hughes’ hotel room before telling her ‘you know you want this’ and raping her.

After privately speaking to Fox lawyers about the supposed incident last year, the suit alleges, she was blackballed by the network, leading to her losing out on a job in the Trump administration.

And when she went public about the abuse, Fox released private emails between her and Payne in an effort to smear her name, the shock legal filing says. 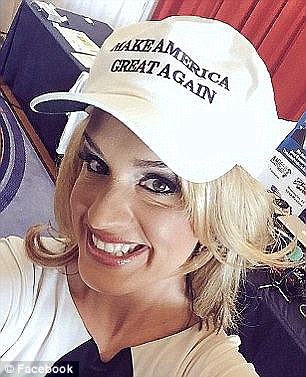 Charles Payne (left), host of Fox Business’s Making Money, has been accused of raping Scottie Nell Hughes (right), a former Fox contributor, in a lawsuit filed by her on Monday 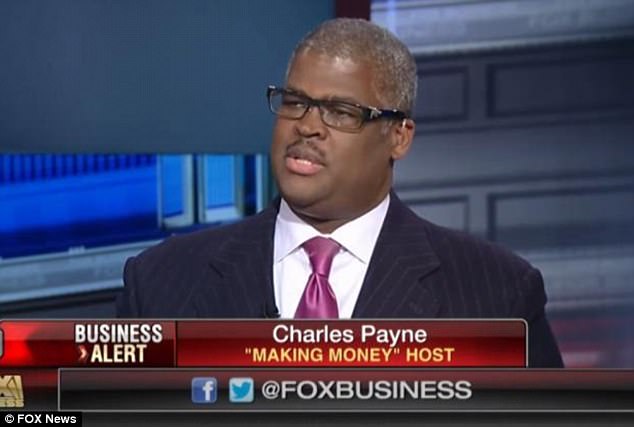 The suit says that Payne began pursuing Hughes after their first Fox appearance together in April 2013, and in July he forced himself on her in her hotel room saying she ‘wanted this’

Hughes, 37, has previously accused Payne, 56, of sexually harassing her and pressuring her into an ongoing relationship with the threat of taking away her appearances on Fox. Both are married.

But this is the first time the host – who presents Making Money with Charles Payne on Fox Business – has been accused of rape.

The suit, which was filed by attorneys Douglas H Wigdor, Jeanne M Christensen and Michael J Willemin, names Payne, Fox News and 21st Century Fox, among others, as defendants.

You’ve been teasing me since that first time on set, wearing those short dresses over those long legs with your big boobs hanging out

Payne’s remarks to Hughes on the night he allegedly raped her, according to her lawsuit

It says that Payne and Hughes first started working together in April 2013, initially when he hosted Cavuto and then again as fellow panelists on Hannity.

It says that Payne offered to mentor Hughes in the months afterward, and that around July 9, Payne began pressuring her to give him her hotel room number over several hours.

She relented and agreed to a private conversation with him that night, the suit claims, but when he came to her room he began to sexually assault her, saying ‘You know you want this.’

‘You’ve been teasing me since that first time on set, wearing those short dresses over those long legs with your big boobs hanging out,’ he allegedly said. 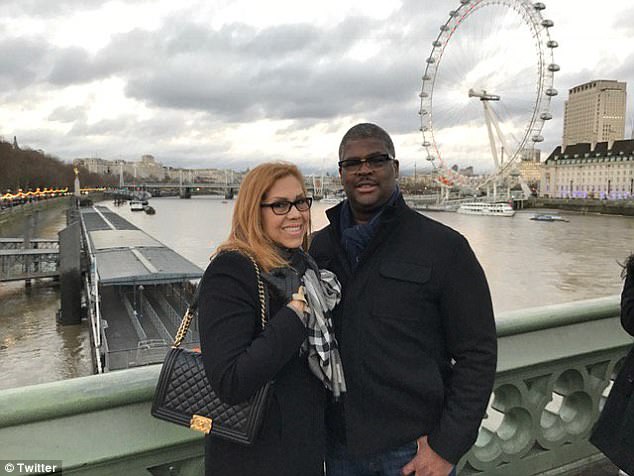 Payne (pictured with his wife) admitted to a two-year affair with Hughes in July, but has vehemently denied claims of sexual harassment. Hughes says he coerced her into that

Despite Hughes repeatedly telling Payne ‘no,’ he continued and she stopped fighting back, fearing ‘irreparable physical harm,’ the suit claims.

‘After he raped her, Payne disturbingly announced on his way out, “This changes things.”‘ the suit says. 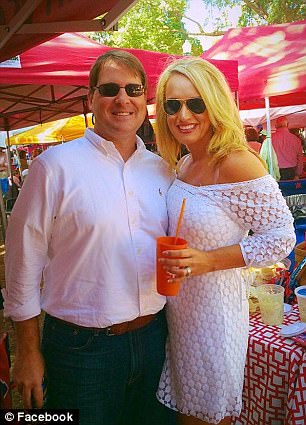 In the years afterward, Payne then pressured her into maintaining an affair by citing other ‘relationships’ between male Fox hosts and female contributors, and told her that as a woman she needed a man ‘to go to bat’ for her, the suit claims.

It claims that Hughes tried to shut down the relationship repeatedly, but that Payne responded ‘angrily and violently’ with ‘profanity-laced tirades’.

The suit also claims that ‘on several occasions, when Payne was angry with her, he forcibly grabbed Ms Hughes in such a way that bruises were left on her arms.’

Payne has previously denied the claims of sexual harassment made by Hughes as ‘an ugly lie I vehemently deny to my core’.

He has not yet commented on the new rape claims. DailyMail.com has reached out for a statement.

After Hughes finally called an end to their relationship in June 2015, the suit claims, Payne threatened to drop her from Fox altogether.

And when she remonstrated, it claims, former co-president Bill Shine took the side of Payne, whom he favored.

Her appearances on Fox dwindled and she was finally cut off in March 2016, allegedly after Payne’s wife complained to Shine about her husband’s relationship with Hughes.

That blacklisting led to her losing several potential roles in the Trump administration, after it found out she was ‘not bookable’ on Fox, the suit says.

Her booker was told by someone at another network that other channels were avoiding her because she ‘had an affair with someone at Fox and we were told not to book her.’

Separately, Shine was ousted in May of this year after concerns about the culture of sexual harassment at Fox following allegations made about Bill O’Reilly and Roger Ailes.

As concerns regarding Fox’s culture grew, the company retained lawyers from Paul Weiss to whom employees could report accusations of sexual harassment and other allegations.

But when Hughes called Paul Weiss to privately talk about Payne, the suit claims, Fox’s internal lawyers stepped in and demanded details from her manager in a June 26 phone call.

He refused to give information, and five hours later, intimate emails from Hughes to Payne were leaked to the press – a deliberate act of smearing by Fox, the suit says.

The emails – in which Hughes graphically describes apparently consensual sex with Payne – were initially leaked to the National Inquirer and then obtained by the Huffington Post, the filing says.

Hughes’ emails, which her suit claims were leaked to the media to smear her name, were obtained by Red Alert Politics on June 6.

The site said that two unnamed sources had verified their authenticity.

It reads: ‘You are going to need every once [sic] of energy if we are ever given the chance of lots of time and no commitments’.

The second, dated six minutes later, graphically recounts a dream that Hughes supposedly has of the pair together.

‘Do you know what I keep dreaming about.. You and I in the pool… My legs wrapped around your waste [sic] and you have me pressed up against the wall of the pool,’ it reads.

‘Skin glistening and smelling of coconut… You thrusting yourself deeper inside with each push… And your fingers grasping each of my cheeks. Holding me to you.’

The third and final email, titled ‘RE: Tell me about the problems,’ is dated September 7, 2013.

It concerned interactions between the pair, according to Red Alert Politics, and read: ‘That is the ideal way to start a Saturday or any day for that matter.’

Hughes, her lawyer and agent have all been contacted to provide context for the apparently consensual content of the emails.

DailyMail.com reached out to Wigdor, Hughes and Hughes’ agent, Michael Sanchez, for information on why the emails appeared to suggest a consensual relationship.

Fox responded to the claims with a sharply worded statement, saying: ‘The latest publicity stunt of a lawsuit filed by Doug Wigdor has absolutely no merit and is downright shameful. We will vigorously defend this.

‘It’s worth noting that Doug is Ms Hughes’ third representative in the last six months to raise some variation of these claims which concern events from four years ago, since it apparently took some time to find someone willing to file this bogus case.’

The lawsuit demands unspecified damages, and for Fox to put Hughes ‘in the position she would have occupied but for Defendants’ discriminatory and retaliatory treatment and otherwise unlawful conduct.’

Payne was suspended by Fox News in July as claims about him and Hughes broke; his suspension was ended on September 7.

‘My complaint speaks for itself. What is most important to me is that justice will prevent other women from going through the nightmare I’m now living,’ Hughes said in a statement on Monday.

‘On my behalf, Wigdor LLP will expose Fox’s unconscionable conduct, including leaking my name to the media.

‘I am grateful to my husband, family, friends and colleagues for the outpouring of love and support.’

Her attorneys, Wigdor and Christensen said they planned ‘to hold [Fox] accountable for yet another case involving sexual harassment and retaliation inflicted by Fox executives in order to protect male, on-air talent.’

Payne admitted to the affair in July, but he referred to the claims of harassment as ‘an ugly lie I vehemently deny to my core,’ on Twitter.

He added: ‘There is a mountain of proof that also proves its a lie.’

The Fox host also said he ‘will fight this like a lion armed with truth. Thanks so much to all those that have reached out in support. #FightingBack.’ 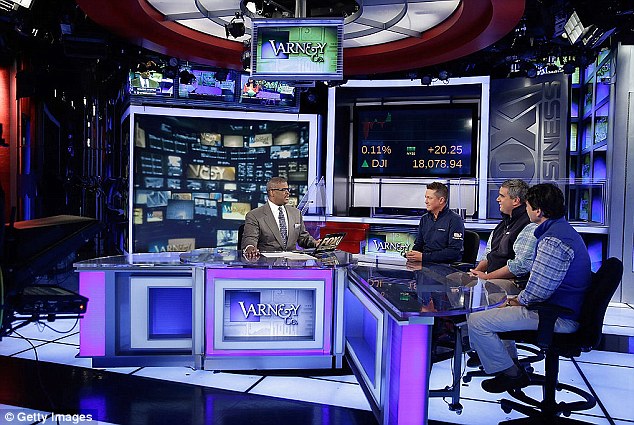 The relationship between Hughes and Payne was well-known within Fox News circles, ten sources told The Huffington Post in July.

Hughes is best known for her pro-Trump appearances on CNN during last year, when she made a string of gaffes, including referring to Molotov cocktails as ‘Mazel Tov cocktails’.

But she also worked as an unpaid guest commentator on Fox from 2013-2016 – during which time she struck up an affair with the married father, according to the Los Angeles Times.

They barely hid their illicit encounters, apparently sharing a hotel room at a May 2015 company trip to the Money Show in Las Vegas, sources told The Huffington Post.

Payne, who was hosting Making Money With Charles Payne at the event, disappeared with Hughes for ‘hours’ at one point, the sources claimed.

And Hughes, who is also married, attended Payne’s birthday party at his home in 2015, where the pair’s behavior reportedly made Payne’s wife uncomfortable.

Hughes now claims that she was coerced into the relationship with threats of reprisals.

But she also told her lawyer that she had stayed in the relationship because she thought he would help her land a permanent position at the network, sources told the Times.