Scottish Mortgage was down 25% since February. What does this mean for the UK’s most popular trust?

The hugely popular Scottish Mortgage investment trust has slumped by more than 25 per cent in three weeks as it suffered from a sell-off in global technology and growth stocks.

Rising US bond yields and inflation fears sent the £16billion fund’s share price falling another 4.5 per cent today to 1,040p. That leaves legions of British investors nursing a hair-raising slump of 26 per cent from its peak of 1,415p in mid-February.

SMT remains up by a hefty 73 per cent over the past 12 months but investors will be fearing there is further to fall as the tide turns against growth stocks during the pandemic recovery.

US and Chinese high-growth stocks, which make up the bulk of Scottish Mortgage’s portfolio, have been sold off over the past few weeks as their appeal has lessened due to a sharp rise in long-term bond yields.

Rising yields sharply reduce the attractiveness of equities that are valued according to high future expected earnings.

Institutional investors have been selling their Treasury holdings over concerns that inflation could lead to higher interest rates, which would in turn lead to poor performance of US and other developed world government bonds.

Scottish Mortgage’s descent contributed to the FTSE 100 index falling 0.75 per cent yesterday, to 6,624. Stock markets in geenral hover have not crashed as funds have been switched from growth stocks into value and cyclical equities, and into diversification stocks like commodities and property.

The trust itself slumped by 6 per cent to the bottom of the index and swung to an 8 per cent discount, having traded on a slight premium for most of the past 12 months.

The discount now stands at 2.75 per cent and its share price is 1,073p according to Hargreaves Lansdown figures, compared to a 12-month average of 0.5 per cent premium. 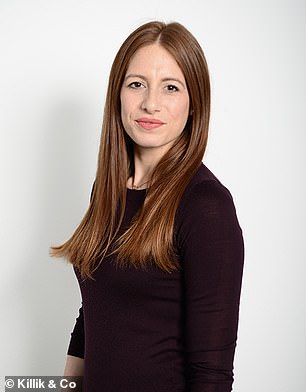 The hugely popular trust has been one of the stock market ‘darlings’ of the last year, according to Rachel Winter, of Killik & Co, said, having doubled between February 2020 and February 2021.

She said this impressive performance is in part due to its big position in Tesla, whose share price is up by more than 300 per cent over the last twelve months.

‘Tesla recently informed the market that it has invested $1.5billion of its cash into bitcoin, which caused concern among some of the company’s investors,’ she added.

‘Bitcoin is down 18 per cent from its recent peak, leading to a fall in the Tesla share price, which in turn has harmed Scottish Mortgage.

‘But despite the recent fall in the price of the investment trust, long-term investors will still be sitting on huge gains.

‘Meanwhile, its fall-back to its 200-day moving average, may for some, be viewed as a potential buying signal.’

It’s not often the trust falls to a discount, but then neither have premiums been particularly high even recently, with the fund’s share price closely mirroring its net asset value (NAV).

The trust has performed spectacularly well in recent years, as growth stocks have dominated global returns. SMT is up about 75 per cent over one year and a whopping 343 per cent over five.

This compares to just a 100 per cent rise for its AIC Global sector average trust and 88 per cent for the FTSE All World index.

He said: ‘The fall in the share price has exceeded the fall in the tech market. The shares were trading at a small premium in early February.

‘Some market consolidation is healthy and to be expected. When we analyse the underlying trends that are driving the cash flows of these businesses, we remain positive in the long term.’ 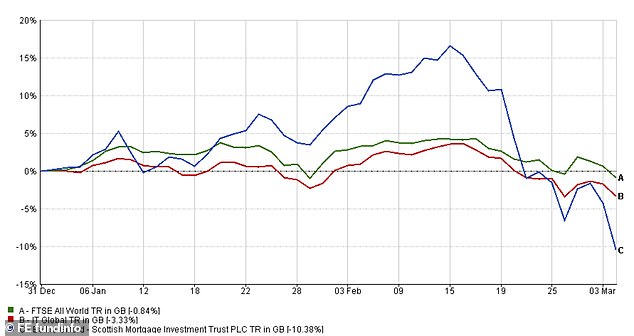 Meanwhile Alex Moore, head of collectives research at Rathbones, said short bursts of underperformance would not phase a management team’s like Scottish Mortgages which is made up of James Anderson and Tom Slater.

‘When fund managers take a long-term perspective of their holdings, it also makes sense for investors to do the same,’ he added. ‘Rising inflation expectations are having a negative share price impact on companies that were trading at relatively higher valuations.

‘These names are not exclusive to the tech sector, though as a sector, it has been a strong performer through 2020 and over the past decade.

‘The market has had moments like this where value names and more cyclical companies have outperformed, such as in 2016 and 2013.

‘For a trust like Scottish Mortgage, this might actually present them more opportunity to buy into existing names at lower levels or into new ideas trading at cheaper valuations.’

Furthermore, despite the current negative outlook on high-growth stocks, the managers of the trust identify companies that will benefit from long-term structural trends and changes.

‘This means that short-to-medium term bouts of share price underperformance are unlikely to change their investment thesis on the companies held, or higher level industry themes,’ said Moore. 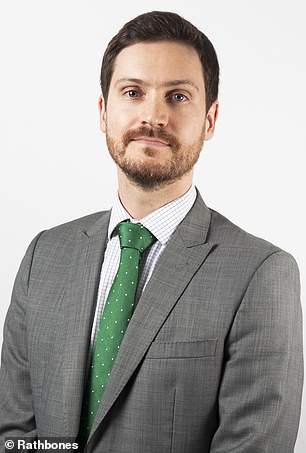 The trust contains numerous companies that are set to benefit from the ongoing digitalisation of the world, such as Amazon and ASML while also containing several Chinese companies such as Tencent and Alibaba, which Winter said ‘look set to do well as the Chinese growth rate surges back to pre-pandemic levels’.

She added: ‘The past two weeks have demonstrated why it’s so important to have a diversified portfolio. Those with excessive exposure to high-growth stocks will have experienced a steep fall recently.

‘That said, lockdown has led to an accelerated adoption of new technologies, and this is expected to continue even after lockdown ends. While it’s important not to be overexposed to technology, it would also be a mistake to rotate out of it entirely.’

There is also the fact that the trust also holds a number of unquoted firms which have yet to realise their potential.

‘Lilium is in talks to go public through a merger with US SPAC Qell Acquisition. Qell has begun discussions to raise new equity for a transaction to value the combined entity at more than $2billion,’ he said.

‘Stripe is another portfolio holding and investors are valuing Stripe at a $115billion valuation in “secondary market” transactions, where shares of a private company’s stock are sold after they were first issued.

‘That valuation is up more than threefold from the $36billion Stripe fetched when it raised money in April 2020 from venture firms including Andreessen Horowitz, General Catalyst and Sequoia.’

Overall, most investors are likely to remain bullish on the long-term investment case for Scottish Mortgage and its holdings, and especially after the recent pullback.