By Dawn Thompson For The Mail On Sunday

To many, it’s a fun fairytale to lure tourists; to others, it’s a genuine mystery – or just a silly hoax.

But to woke education chiefs, the Loch Ness Monster is a potent symbol of England’s domination of Scotland – a theory which will now be taught in schools.

Pupils north of the border are to be told how the mythical beast reinforces negative stereotypes and ingrains bias about the Scots.

Schoolchildren will be taught how the class structure had a role in the creation of the legend, and how stories surrounding the creature relate to debate on Scottish Independence and even the Cold War.

Said to be a picture of the the head and neck of Nessie. This famous photo was taken in 1934 by a vacationing London surgeon, Robert K. Wilson, in Loch Ness, Scotland.

The remarkable claims about Nessie come in a 17-page social studies lesson plan to help secondary school teachers teach what the monster’s portrayal in films says about Scotland’s image and how it affects ‘wider contemporary topics, such as the Independence Referendum’.

The material aims to help 11-to-14- year-olds ‘recognise persuasion and bias’ and asserts that the monster was ‘designed as a tourist attraction to appeal to the motoring middle classes’ during the Depression.

Though the earliest reports date from the 6th Century, the Nessie phenomenon exploded in the 1930s with a flurry of alleged sightings and photographs.

And the first film about Nessie was 1934’s low-budget horror romp The Secret Of The Loch.

The lesson plan says the movie monster ‘shows the somewhat ambivalent position that Scotland holds in the Union… the very idea of a prehistoric monster in a loch affirms the stereotypical idea that Scotland – by contrast to England – is a rural wilderness, perhaps one bypassed by progress.

‘The monster’s depiction suggests that although there was a “primitive” wilderness in Scotland before the state of Britain, the modern state has the ability to control it using advanced knowledge and technologies.’

The document goes on to describe how the Nessie legend was ‘indicative of the development of the modern state of Britain’, and that the creature’s depiction ‘reveals a lot about Scotland’s position within the Union… the supposedly unified national community to which people could “imagine a sense of belonging”.’

It adds that ‘cinematic depictions of Nessie enabled Britain to imagine itself as a modern and unified state’.

Also placed under scrutiny are the 1996 family drama Loch Ness, starring Ted Danson and Joely Richardson, and the 1983 short The Loch Ness Monster Movie, in which a cheaply animated claymation Nessie rampages through Edinburgh. 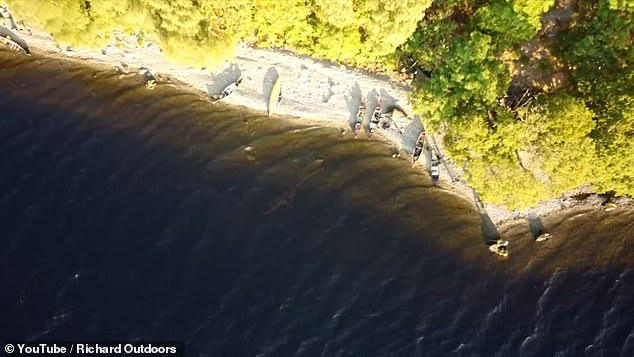 Footage shot by Richard Mavor in September 2021 shows a mysterious black shape on the banks of the lake in Scotland, thought to be Nessie

The teaching aid says: ‘This monstrous destruction of the nation’s capital questions whether Scotland may be dragged into the dangerous arena of the Cold War due to its relationship with England… and indeed, Britain’s “special relationship” with the USA.

In this movie, Nessie is a Scottish monster, questioning whether, in the circumstances it finds itself in, it should reconsider its position in Britain in order to find a different place in the world.’

Chris McGovern, chairman of the Campaign for Real Education, slammed the material, saying: ‘There is no question about it presenting anti-British bias. It seeks to brainwash pupils into believing that Scotland is the victim of a wicked conspiracy to subvert and infantilise its identity.

‘The nationalist cause must be in desperate trouble if it has to resort to such propaganda tactics with young people. My advice to teachers is to use the Nessie Plan itself as an example of how “bias” is used by educators.’

Education Scotland said last night: ‘Through the study of films, the resource encourages students to debate, to analyse bias and understand the role film has played in shaping the global view of Scotland.

‘It also seeks to support pupils in learning about the importance of respecting the heritage and identity of others.’