Scrapping the paper car tax discs has led to a surge in fee dodging and cost nearly £300million, the Daily Mail can reveal.

But the changes have led to a dramatic rise in motorists either deliberately dodging tax or forgetting to pay it. It means the Treasury has lost an estimated £281million since 2014.

A car disk seen through a car windscreen. Scrapping the paper car tax discs has led to a surge in fee dodging and cost nearly £300million, the Daily Mail can reveal

Last night, critics described the scheme as a failure and said the millions could have been spent on improving our crumbling roads.

Steve Gooding, director of the RAC Foundation, said: ‘Getting a piece of paper to stick in the windscreen might seem a quaint idea in the digital age, but what we’ve lost is the daily reminder it provided for all to see when the next payment was due.’

Local post offices have lost millions of pounds in income because of the decision to move car tax online.

The 11,500 branches received £11million per year before the changes in 2014. This has dropped to £3million, according to National Federation of Sub-Postmasters (NFSP) figures. One postmaster said he had lost £4,000 a year. In the year before the abolition of tax discs, 19.4million people renewed road tax at the Post Office.

By last year, that number had dwindled to just 7.1million. Postmasters used to receive up to 45p to process a car tax disc, but now get as little as 28p. The Mail has campaigned to save local post offices after postmasters warned the network was ‘staring over the precipice’.

Peter Hall, of the NFSP, said: ‘It is galling that the removal of tax discs has cost the taxpayer so much, as well as damaging incomes.’

He said the missing sum was ‘more than the pothole repair fund announced by ministers in March’.

Roadside surveys by the DVLA reveal that losses from car tax were around £35million in 2013/14 – the last year when discs were in use.

But this has risen to £94million in 2019 alone, with an ‘upper estimate’ of £281million since 2014. Some tax will be reclaimed or repaid later, the Driver and Vehicle Licensing Agency (DVLA) said.

The DVLA also says it raises £6billion for the Treasury every year. This includes at least £238million in fines and penalties against vehicles it has caught dodging tax.

The coloured disc system was overhauled by then-Chancellor George Osborne as part of a ‘Red Tape Challenge’ to streamline services. Every vehicle’s tax status is now kept on a DVLA computer and drivers are automatically posted or emailed reminders.

But evidence shows renewal letters can be sent to old addresses or are missed in mountains of junk mail.

Of those found dodging tax, 54 per cent were caught two months after they should have renewed – suggesting the evasion is accidental. The increase is being blamed on another change in the system that re-quires drivers to pay tax every time a vehicle changes hands. 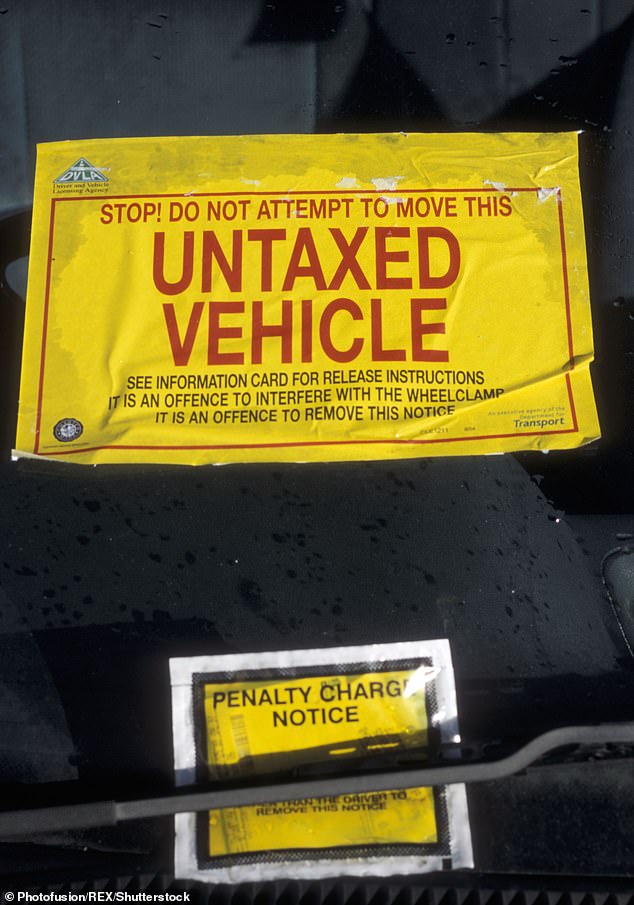 But Sir Patrick McLoughlin, who was transport secretary at the time of the changes, defended the reforms. He told the Mail: ‘The idea that paper discs is the way you stop evasion is nonsense.

‘I wouldn’t want to go back to that system. We don’t make people put discs in their car to show they’ve paid insurance, and people still renew their insurance.’

The DVLA was unable to comment due to the ‘purdah’ period ahead of the election.

HOW DID THE OLD SYSTEM WORK?

Paper tax discs were introduced in 1921. Drivers had to display a coloured disc in their windscreen as proof they had paid road tax, known as Vehicle Excise Duty (VED). The disc displayed an expiry date and let policemen and traffic wardens easily identify unlicensed vehicles.

WHEN DID IT CHANGE AND WHY?

Discs were abolished in October 2014 by David Cameron’s government. The Department for Transport (DfT) said £10million a year could be saved from no longer producing and posting the discs. Officials said police could tell the tax status by checking a DVLA database.

HOW DOES NEW SYSTEM WORK?

Drivers are posted or emailed a reminder to renew online. But many drivers forget to renew – since the DVLA only sends one reminder. Many are unaware that when they buy a second-hand car they must tax it instantly.

WHAT DO MOTORING GROUPS SAY?

The RAC and AA have voiced opposition to the reforms. The AA has accused the DfT of ‘bamboozling’ drivers with complicated reforms. The RAC Foundation say the near-£300million in lost revenue has contributed to the worsening state of the nation’s roads.

HOW ARE PEOPLE CAUGHT?

WHAT ARE THE PENALTIES?

Any motorist caught driving without road tax could be fined up to £1,000. Cars can be clamped or impounded with drivers charged a £100 release fee. Figures in March show the number of cars being clamped has rocketed to more than 2,500 a week since paper discs were abolished.