‘I’m slipping!’: Desperate screams of woman, 33, as police pleaded with her to move away from clifftop before she plunged to death in tragic accident

A woman cried out ‘I’m slipping’ to police officers as they tried to talk her away from a cliff edge moments before she plunged to her death.

Katherine Applegate suffered several devastating injuries after falling into the sea near Perranporth in Cornwall while twice over the legal drink drive limit.

The 33-year-old had been found by officers sitting on the cliff in a distressed state after receiving a call from her boyfriend Joe Wilson.

As a police negotiator spoke with Ms Applegate, she slipped on wet grass and ‘disappeared over the edge feet first’ as she ‘scrabbling to try and stop herself’.

An inquest into her death in Truro heard that Ms Applegate had a history of self-harm and had taken an overdose a year before her death.

But assistant coroner Stephen Covell recorded a verdict of accidental death, adding that there was ‘no evidence that Kat intended to harm herself’ on the day.

Ms Applegate called Mr Wilson on the evening of September 4 telling him that she was sat on the clifftop at a coastal beauty spot called Droskyn Point.

He arrived at the cliff at 10.30pm to find Ms Applegate upset that she had lost her job serving in a pub after she was caught stealing alcohol, reported Cornwall Live.

After failing to convince to climb back over the fence cordoning off the cliff-edge, he called police at 1.15am.

Police officer Daniel Roberts told the inquest that ropes were being laid down to help Ms Applegate when she cried out ‘I’m slipping!’ 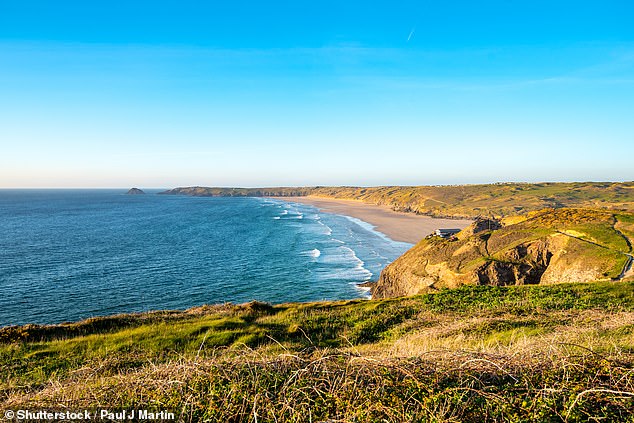 He added: ‘All I remember seeing is Kat disappear over the edge feet first. She was scrabbling to try and stop herself.’

‘She’d gone up to a cliff where she had fond memories. There is no indication or evidence that she intended to jump off the cliff.

‘The decision to go there was probably an impulsive one and in keeping with her character.

‘So this was probably an impulsive and rash decision to put herself in that position. Unfortunately, while a rescue team were laying the ropes to rescue her, she slipped.’