Police have shocked burglary victims by closing their investigation into a violent break-in during which an armed gang were filmed kicking open a front door to a house.

Although close-up images of the thugs taken from newly installed cameras were given to officers, they say there are ‘no clearly identifiable suspects.’

The Metropolitan Police have been unable to make any arrests because the men were hiding their faces with scarves and had hoods pulled over their heads.

Two sisters, aged 21 and 25, were chased out of their family home in Bedfont, Middlesex, by a gang of screwdriver-wielding burglars

And despite the break-in at the house in Bedfont, Middlesex, only taking place a month ago, Scotland Yard say they have now shut down the investigation and will only re-open it if they get any more leads.

The eldest victim said: ‘I’m really disappointed the police have closed the investigation because I felt they could have done a lot more.

‘When the officers came round we got the feeling that because nobody was hurt during the break-in they didn’t seem to treat it as serious as they should have done.

‘Nobody at the police has got in touch to say the investigation is closed which is quite surprising.

‘Not only was £1000 in coins stolen but we spent £800 fitting a new door because the burglars smashed in the old one. We’re hoping to get the money back on the insurance.’

Victims in the house were forced to flee when burglars armed with screwdrivers kicked open their door on January 17 at 10.43pm and began rifling through their home.

CCTV footage captured them trying to wedge open the door with one of the large screwdrivers.

Spotting they are being filmed as a light flicks on in the hallway, a burglar is heard saying ‘we’re all on camera’ before another gestures towards the door and says ‘kick it in.’

As they do so, shouting can be heard coming from inside the suburban house.

The two young women inside managed to flee through the kitchen and out into the garage, where they hid in darkness.

As two of the men began to rifle through their five-bedroom property, the 25-year-old and 21-year-old quickly escaped the property via a side door.

However, they were confronted by the two other men lurking outside the house who chased after them.

With one of the women on the phone to the police, a neighbour alerted by screaming opened their door and ushered them inside to safety.

The women, who wish to remain anonymous for fear of being targeted again, were forced to watch from the other side of the street as the raiders searched through their home and escaped with £1000 in pound coins that was destined for charity but ignored a further £400 in notes. 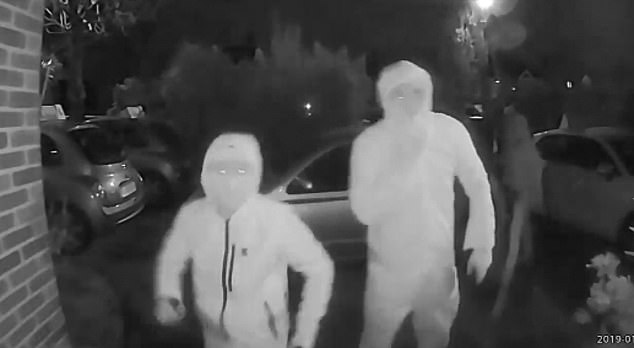 The eldest victim said: ‘We heard the door handle move and then my younger sister went to see who it was and they started to kick the door.

‘I said to my sister that we either needed to hide or get out so we ran to the garage until they got in and then the plan was to run out of the house.

‘We assumed there was one or two of them. I stood by the garage door as my younger sister called the police.

‘After the door was kicked in and we could hear them inside, we waited for a moment two before we ran out of a side door in the garage.

‘That’s when we saw more of them. Two of them ran behind us, they didn’t say anything – they just chased us. 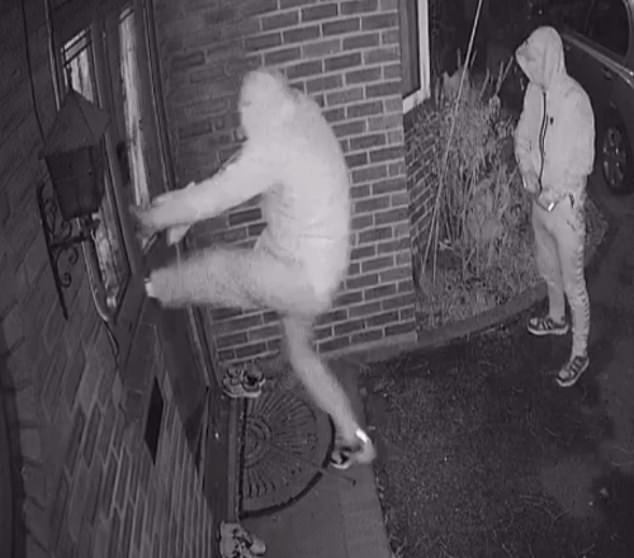 The eldest victim said: ‘We’d been saving up the coins for months and months and most of the cash was going to charity and the local temple’

‘We managed to run across the street and one of our neighbours quickly opened the door and let us in.

She added: ‘They had screwdrivers and were brazen about kicking their way into a house with the owners inside.

‘I shudder to think what could’ve happened if they’d caught us.’

‘Whilst waiting at the neighbour’s house for the police, we could see our house. The burglars went upstairs and put the lights on. But they had run out of the house before police arrived.

‘We have been left traumatised by this incident and we would really like to know if anyone could recognise anything from the CCTV footage because these men are still out there.’

The women live with their mother and another sister, who were both in India at the time of the break-in.

The family installed CCTV cameras, which connect to their mobile phones, two weeks before the burglary.

In the footage, a car, believed to be a metallic grey Citroen C4, can be seen parked by the drive.

A fifth man is behind the wheel.

The gang made their getaway in the vehicle just before a bus passed by, according to the victim.

In an appeal for more information, she said: ‘The only thing I remember from the incident is that the gang had parked a car in the street facing our house.

‘The vehicle was a Citroen C4 first generation and dark metallic grey in colour. 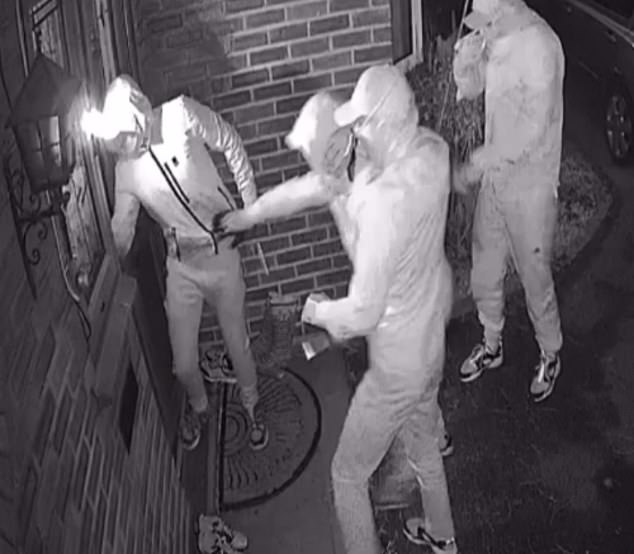 After they were chased out of their garage, the sisters managed to flee to a neighbour’s house 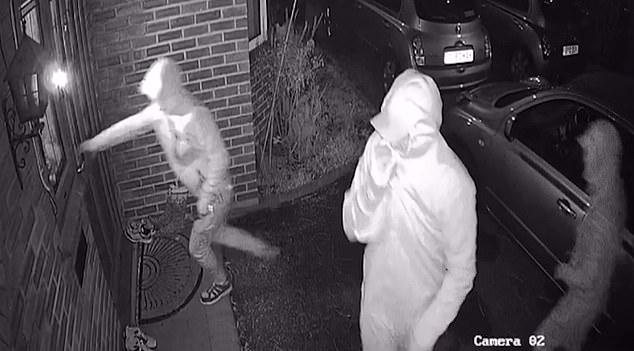 The eldest victim said: ‘We managed to run across the street and one of our neighbours quickly opened the door and let us in’

‘I’ve mentioned to the police that a bus drove past at the same point and must have captured the number plate.

‘But we haven’t heard back from the officers about this and it’s now been more than a month.

‘Bizarrely, the burglars only stole a bag containing £1000 worth of £1 coins.

‘We’d been saving up the coins for months and months and most of the cash was going to charity and the local temple.

‘There was at least £400 in notes in a separate bag on top of the coins but they didn’t touch that. In fact no jewellery or other valuables were taken.

‘It was fortunate that we’d just put the cameras up so their images have been captured, although in the footage they are hiding their faces behind scarves.

‘The cameras sent an alert to my phone telling me that someone was outside, which confused me as I wasn’t expecting anyone at that time of night.

‘What happened next has left us traumatised but the police haven’t found these men yet and we want to make everyone aware of the danger they pose.’