Seagull walks around KFC carpark with arrow piercing its body

A seagull who is thought to have been shot by a crossbow was filmed still managing to walk and even fly with an arrow sticking out either side of its body.

James Squire spotted the poor bird at a KFC drive-through in Blackpool, Lancashire and could not believe that it was still able to walk.

A seagull was seen walking around a KFC drive-through in Blackpool, Lancashire, with an arrow through its body

The bird walks around naturally, climbs up onto a kerb and is even able to run away from another bird.

James said: ‘I was in my car when I looked out my window to see this bird with an arrow sticking right through its body.

‘I couldn’t believe it, it was such a bizarre thing to see.

‘It looked like the gull was looking for food.

‘It flew away and then came back at one point.

‘There was no blood or anything.

The bird may have been shot with a crossbow which has horrified social media users.

They described it as ‘shockingly cruel’ and ‘disgusting’. 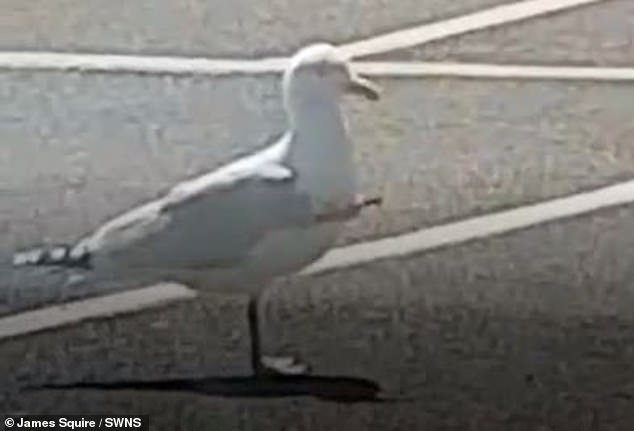 People who were worried about the bird tried to catch the seagull and take it to a vet but it kept flying away.

One of the people who tried to help, Mark leech, told the Blackpool Gazette the seagull was so distressed it refused food offered to it.

He said: ‘It was awful, I tried to tempt it over with some chips but it wouldn’t come within 20 feet.’

‘I just hope they catch the cruel person who did this.’

The attack has been reported to the RSPCA.