Seal numbers in the Thames have fallen by 12%, report reveals

Seal numbers in the Thames have fallen by 12 per cent since 2019, a new report from the Zoological Society of London (ZSL) shows.

There were 797 harbour seals and 2,866 grey seals detected this year – a combined total of 3,663, according to the charity’s annual seal population survey.

Despite this fall, the charity describes the Thames as ‘a key ecological hotspot’ for the two seal species, which are top predators in the iconic river.

The numbers mark an amazing turnaround from 1957, when the river was so polluted it was declared ‘biologically dead’ by the Natural History Museum.

Marine biologists use the seal population figures as a barometer of the health of the river, with stable numbers indicating good water quality and reliable stocks of fish.

Seals feed on a wide range of fish in the Thames Estuary – where the river meets the waters of the North Sea – and can sometimes be seen resting on the sandbanks in the outer Thames at low tide.

But, incredibly, they’ve been spotted in the Thames throughout London as far west as Richmond.

ZSL’s seal population survey for 2021 was led by conservation biologist Thea Cox, who said ‘it is the long-term picture that is most significant’, despite the 12 per cent decline since 2019.

This year’s seal population survey is the first such survey since 2019 due to the coronavirus pandemic.

‘It is important to do these surveys on a regular basis,’ said Cox.

‘We still have a long way to go in terms of improving water quality and making space for nature, but this healthy, thriving population shows how conservation measures really work – and just how far the Thames has come since it was declared biologically dead in the 1950s.

‘Changes in number can be down to a few factors, such as the variability in the proportion of seals at sea whilst the survey is taking place, but this is something we want to keep a close eye on. 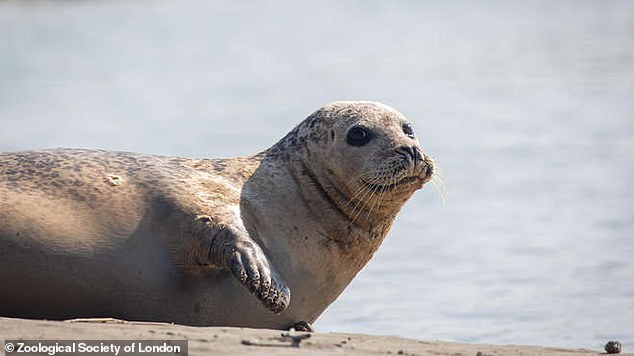 It is estimated that the Thames estuary is home to 2,866 grey and 797 harbour seals, according to international conservation charity ZSL latest’s seal survey results. Pictured, a harbour seal (Phoca vitulina)

‘We will be looking to see what happens over several years and monitoring changes in numbers.’

ZSL conducted the survey from water, land and air covering the Greater Thames Estuary coastline and sandbanks between Felixstowe and Deal.

The team took aerial photographs of the seals from a light aircraft and used boat trips on the Thames Estuary for closer observations where needed. The images were then analysed to confirm numbers and determine species of seal.

This year’s count was undertaken over several days in August, which marks the moulting season for the harbour seals when they spend much of their day out of the water and can be easily spotted basking on the estuary’s sandbanks. 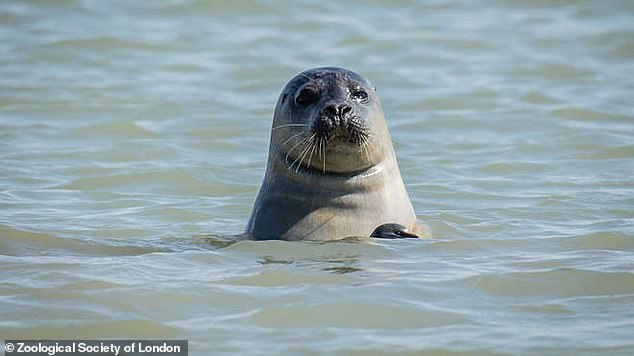 The results from the Zoological Society of London’s 2021 seal survey continue to mark an amazing turnaround from 1957, when the river so polluted it was declared ‘biologically dead’. Pictured, a harbour seal in the water

‘During the 2021 ZSL annual seal survey, we counted 574 harbour seals, and 685 grey seals laying out on the sandbanks along the Thames,’ said Cox.

‘When we combine this with the estimated number of seals that remained in the water during our count, our final numbers are 797 harbour seals and 2,866 grey seals.

ZSL has been monitoring the grey seal and harbour seal in the Greater Thames Estuary since 2013. 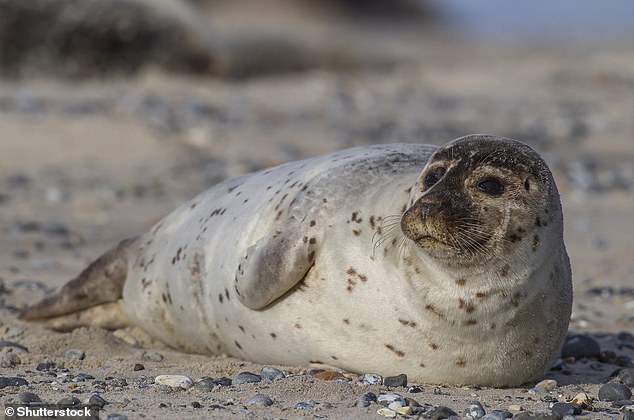 The survey helps scientists to monitor the impacts of emerging threats such as wildlife disease and competition between seal species for food and habitat.

‘Since we began conducting this survey nearly a decade ago, the evidence we have gathered has added weight to how valuable the Thames estuary is as a habitat for these species,’ Cox said.

‘As we continue to build our knowledge base of the seal populations in the Thames and learn more about the dynamics between the two species, we’ll ensure our work contributes to national conservation efforts to preserve seal populations here in the UK.’

The Thames is also home to several other surprising species such as the European eel, Dover sole and the short-snouted seahorse – many of which ZSL’s team are actively monitoring and supporting.

ZSL relies on citizen scientists to volunteer their time, with members of the public contributing to population and habitat surveys.

DIFFERENCE BETWEEN A GREY SEAL AND A HARBOUR SEAL

Grey and harbour (or common) seals can be seen all year round largely on the coast of Scotland.

To the untrained eye, telling the difference between a grey and a harbour seal can be quite difficult.

When viewed in profile, grey seals have much flatter noses (‘a Roman nose’) than harbour seals, whose faces are more dished (they have relatively distinct foreheads).

Grey seals’ eyes are located midway between the nose and the back of the head; harbour seals’ eyes (and mouths) are very much on the front of the face, closer to the nose.

There are also differences in the coats pattern or ‘pelage’, of the two species.

Male grey seals have darker coats than females. But a seal’s pelage can look very different depending on whether it is wet or dry, and also when it is going through its annual moult (December to March for grey seals and July to September for harbour seals).