Sean Penn gave a less-than-glowing account of Steve Bannon on Thursday night during an appearance on Conan.

The actor appeared in the 1991 film The Indian Runner, which Bannon produced, and said he did not even realize it was the same person when he first began to see him popping up places during President Trump’s presidential campaign.

‘He exerted the same level of charm that he does today,’ Penn sarcastically noted before taking aim at Bannon’s appearance.

This despite the fact that his red face and bloodshot eyes made him look remarkably similar to President Trump’s former chief strategist.

I am Sean: Steve Bannon produced Sean Penn’s directorial debut The Indian Runner back in 1991, and the actor discussed his time with Trump’s former strategist on Conan (Penn and O’Brien above)

‘I didn’t even know it was the same Steve Bannon until I looked at him closely and imagined the Steve Bannon I knew but where the toxins of the soul so deteriorate and bloat and weld into this,’ said Penn of Bannon.

‘I don’t think you can age like that without hating people.’

He revealed his big problem with Bannon was his disregard for money and budgets on the set of The Indian Runner, which was his directorial debut.

Penn also suggested that Bannon flew some ladies out to the set for his own personal enjoyment, and had their expenses covered in the film’s budget.

‘I noticed that, without any need for them, we had two cheerleader-looking new makeup assistants on the call sheet that, as the director of that movie, I had not called for and yet it was on my very minimal budget to make this film,’ explained Penn.

‘That was my first sense of him that he was – other than the C-word, charming – he was a crook. I think is what I thought.’

He also took some time to express his disdain for the current administration.

‘It’s worth recognizing, not being in denial about it,’ said Penn.

‘We’re in a time, I think it is important to keep up the culture, so I’m not ashamed to be here with talented people and with you all talking about this stuff. If I were a news anchor, I think rather than reporting, I’d pull a file alarm every night — and keep doing it until somebody realized there was a fire.’

And Penn addressed his own physical appearance as well by stating: ‘I think I’ve always felt the most piece of mind when I’m most bedraggled.’ 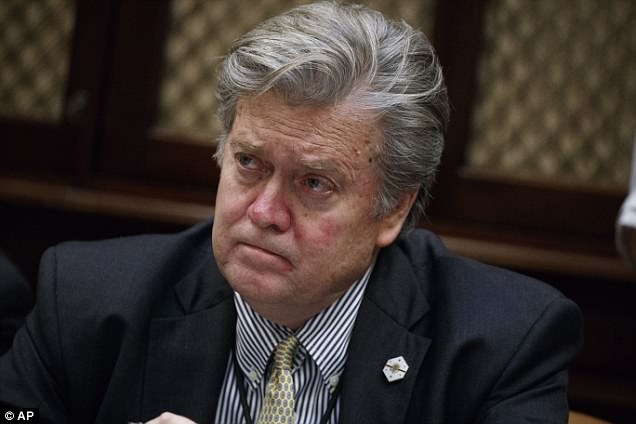 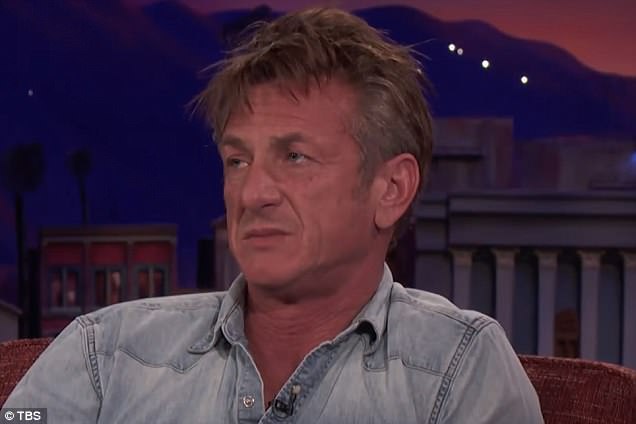 Kettle, pot: He made these comments despite having the same reddened face and bloodshot eyes that Bannon does

Bannon did make waves last September when he got to enjoy his own little glam squad makeover ahead of his ’60 Minutes’ interview that kicked off the current season.

The White House Chief Strategist, 63, was free of the normal blemishes and discolorations that cover his face for the sit-down with Charlie Rose, showing off a never-before-seen even complexion.

This was most noticeable on his nose, which was transformed from deep red to a peach-like flesh tone.

Bannon’s greasy and mopish hair was also cleaned up for the interview, appearing pushed back from his face and neatly parted.

There were still some signs of the old Bannon however, most noticeably in his blood-shot eyes.