In July, an iceberg the size of Delaware broke free from the Larsen C ice shelf.

Now, an international agreement is in place to protect the area of ocean left exposed.

The iceberg- called A68 – is starting to move North, and it will leave behind a 5,818 square kilometer (2,246 square mile) area of seabed exposed to open marine conditions.

In July, an iceberg broke free from the Larsen C ice shelf. An international agreement is in place to protect the area of ocean left exposed. The iceberg- called A68 – is starting to move North, and will leave behind a 5,818 square kilometer area exposed to open marine conditions

In early July, a huge crack in Antarctica’s Larsen C ice shelf caused a trillion ton iceberg – the third biggest ever recorded – to break off from the icy southern continent.

The huge chunk of ice, dubbed iceberg A-68, measures 5,818 square kilometers (2,246 square miles), making it around the size of Delaware, or four times the area covered by Greater London.

Much of the protected area may have been covered in ice since the last inter-glacial period around 120,000 years ago, so the site presents itself as a unique opportunity for scientists to study how marine life responds to this dramatic change.

The protected area is the first to benefit from an international agreement in 2016 by the Commission for the Conservation of Antarctic Marine Living Resources (CCAMLR).

This will allow for scientific research to be undertaken in the area without any impact from commercial fishing, to address questions relating to how biological communities develop over time, and how new species colonize previously ice-covered areas.

The commission designates Special Areas for Scientific Study in newly-exposed marine area following the collapse or retreat of ice shelves across the Antarctic Peninsula region.

The new Special Area meets criteria to be automatically designated for an initial period of two years, which is likely to be extended to ten years. 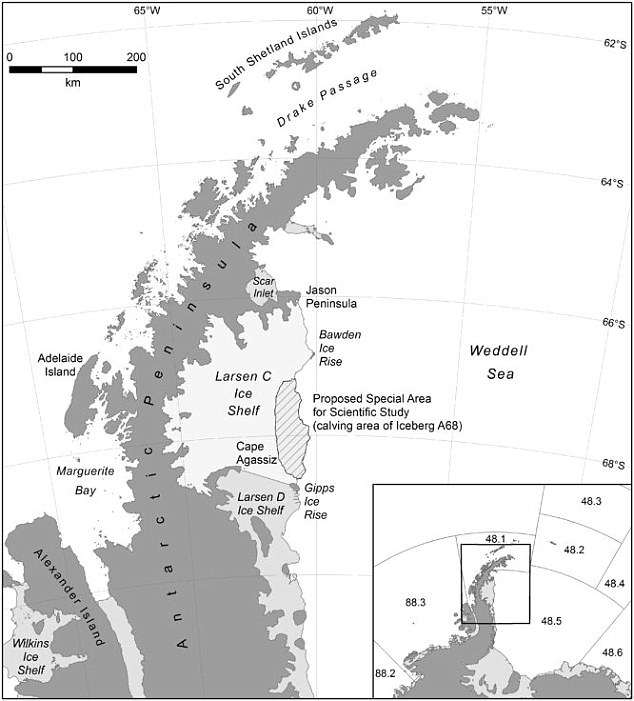 Map of the Antarctic Peninsula showing the Special Area for Scientific Study now agreed. This will allow research to be undertaken in the area without any impact from commercial fishing, to address questions relating to how biological communities develop over time

‘The Larsen C iceberg calving has generated a unique and exciting scientific opportunity, and the importance of this area has been further recognized through CCAMLR’s agreement to designate it as a Special Area for Scientific Study,’ said Dr Susie Grant, a marine biogeographer with BAS.

‘The new designation is a significant addition to CCAMLR’s suite of area-based management tools.’

‘The calving of A68 offers a new and unprecedented opportunity to establish a fundamental scientific program to address questions focused on the mobility and colonization capacity of benthic (deep sea) marine species,’ said Dr Phil Trathan, Head of Conservation Biology at BAS. 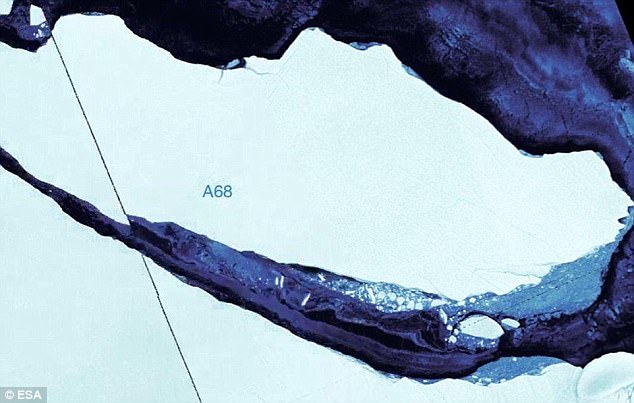 Satellite images have shown that the trillion ton iceberg which broke off Antarctica has begun to drift out to sea. Experts fear the break could see the berg disintegrate into pieces too small to track on satellite. If these drift into shipping lanes, they could pose a significant risk to ships

‘Such a program could address fundamental questions relating to the sustainability of polar continental shelves under climate change, including potentially the processes by which benthic populations migrate, the extent to which benthic organisms act as a biological carbon sink, and the degree to which the distribution of marine benthos can be used to interpret past responses to climate change in various systems. 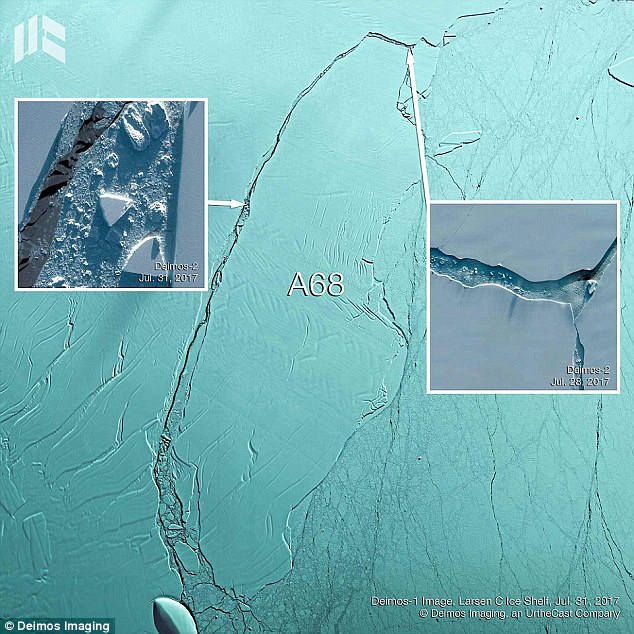 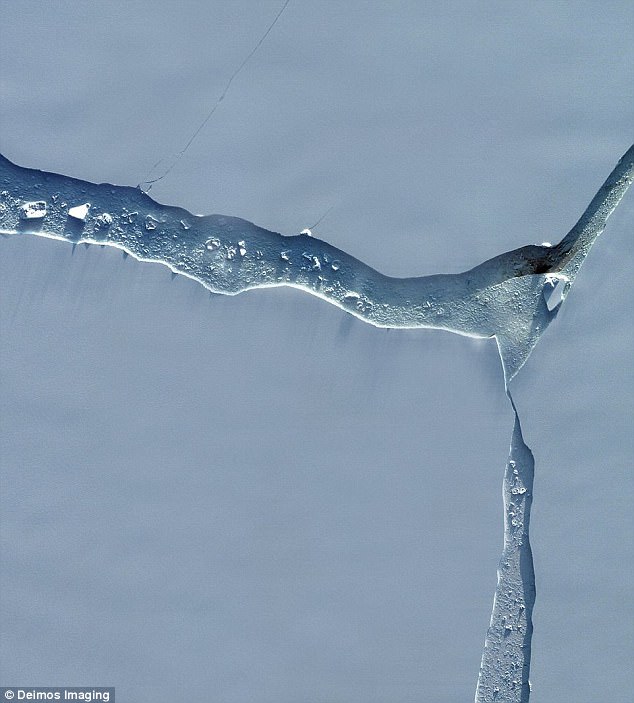 ‘Exploiting this new opportunity, in the absence of fishing, creates an exciting challenge for the international scientific community in this period of unprecedented climate change.’

The Larsen C calving event may simply reflect the natural growth and decay cycle of an ice shelf, and is not necessarily due to changes in environmental conditions.

However, studying the biological response to these kinds of events will provide an opportunity to improve scientific understanding of possible ecosystem responses to the impacts of climate change either in the region or elsewhere.

A team from BAS are now exploring opportunities to access the region to carry out research projects on the benthic environment.

WAS CLIMATE CHANGE RESPONSIBLE FOR A68?

They also discuss how calving of huge icebergs affects the stability of Antarctic ice shelves.

Their article argues that a calving event is not necessarily due to changes in environmental conditions.