Seattle’s newly-introduced 1.75 cent per ounce tax on all sodas and sugar-sweetened beverages last week has residents reeling at the updated price tags.

Only a handful of cities across the US have such taxes, which are designed to discourage consumers from buying the drinks, which research has linked to higher rates of obesity, diabetes and overweight populations.

A couple of pennies may not sound too drastic, but the extra cost adds up for bulk-buyers.

Photos of flats of 35 bottles of Gatorade at whole sale store Costco with prices marked up from $10.34 to $26.33 have been circulating Twitter, sparking controversy among area residents.

Numerous studies have linked sugary drinks to the risk of becoming overweight or obese, like one in three Americans.

The beverages seem to pose a particular risk to children. One study found that, over the course of a year and a half, each additional sugary drink raised the risk that a child would become obese by 60 percent.

Yet new guidelines recently relaxed school lunch nutritional guidelines in the US, allowing more sweetened milk to be served in public schools, and making fruit and vegetable requirements easier to meet.

Americans have historically been skeptical of taxes on vices, so it is no surprise that there isn’t a federal one.

But some cities began taking matters into their own hands last year.

Berkeley, California and Philadelphia, Pennsylvania both enacted their taxes at the beginning of last year.

Oakland, San Francisco and Albany, California all also have these excise taxes,as do Cook County, Illinois and Boulder, Colorado. 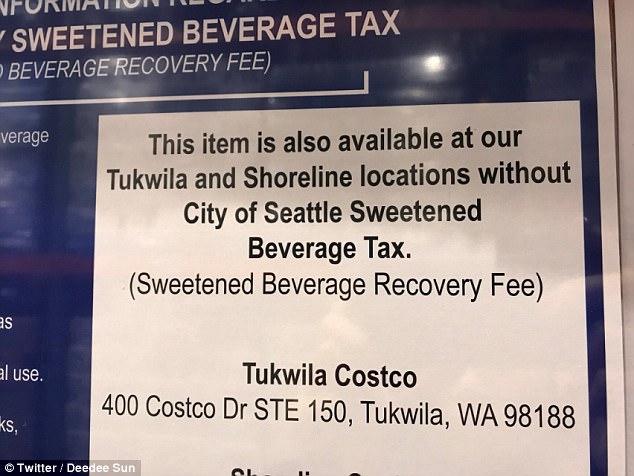 Boulder’s tax is the highest in the nation, at two cents per ounce, and went into effect on July 1 2017.

Taxes, according to some research, can be effective in reducing sugary drink consumption, and, in turn, obesity.

A slew of studies in the last decades attempted to work out the most effective taxation rate, and  linked taxes anywhere between 10 and 20 percent of the price of a drink could lead to a five weight-loss per year per person.

Higher taxes, one Duke University study showed, just led people to get as many calories from untaxed diet soda, but did not benefit from lower caloric intakes.

In Seattle, shoppers are faced with exactly this choice.

Yet the jury is still out on the health risks of diet soda, with some research linking drinking the low- or no- sugar alternatives with 60 percent increases in obesity risks – odds little better than those associated with regular soda.

Along with the price change, the Seattle in Costco also posted a sign notifying customers that they could get around the tax, simply by going outside the ci