An obese teenager who weighed 357lbs in high school said her suicide attempt inspired her to have weight-loss surgery, which helped her lose 160lbs to become 197lbs and shrink six dress sizes.

Nicole Burke, 21, of Seattle Washington, gorged on bagels and pizza from a young age and tried to take her own life in 2013 when she became depressed as a result of her weight struggles.

She said: ‘In high-school I was really active in clubs. I was so outgoing but it was a way to hide what I was really feeling inside.’ 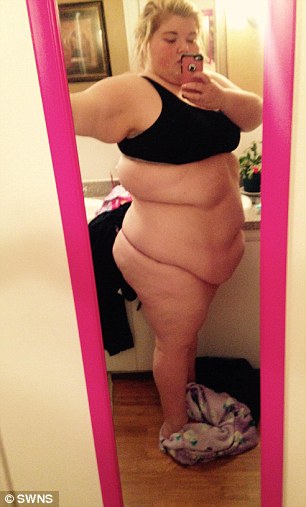 Gorging: Nicole, 21, said she gorged on bagels and pizza from a young age and as a result had weight struggles 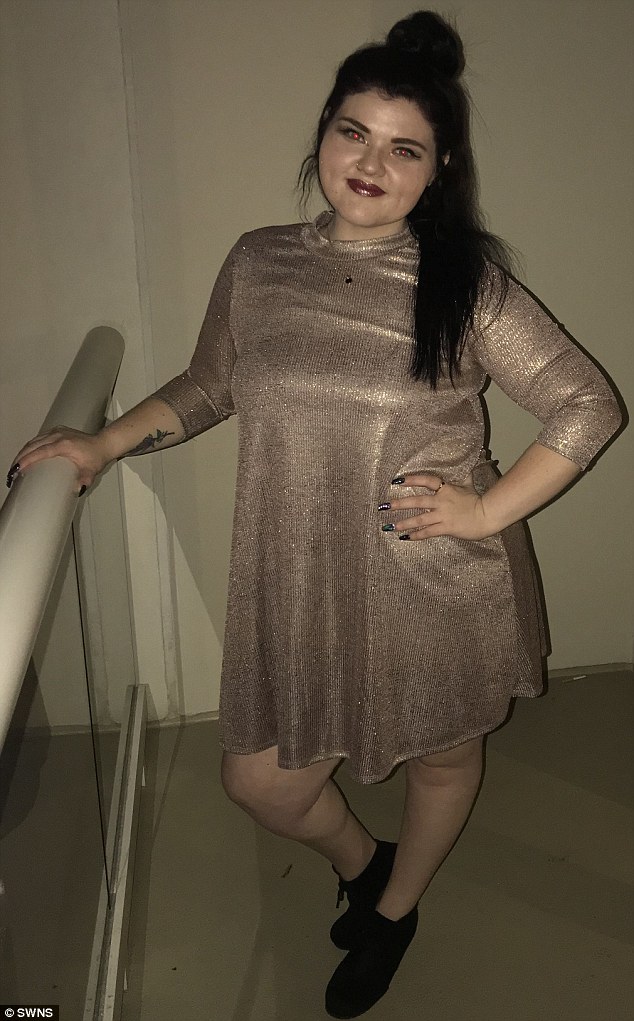 Humiliated: She was embarrassed that her grandma had to sew customized dresses for her

Nicole, an aesthetician, added though she was bubbly and outgoing, she was humiliated that her grandma had to sew customized dresses for show choir and prom to fit her 5XL frame.

‘For big events with show choir, we would all have to wear the same dress, but in my case, I would have to buy three and my grandma would have to sew them together into one dress, just so it would fit,’ she said.

‘When I went to my junior prom, I just had to buy the biggest dress in the store. It was my only option at size 28, and even then my grandma had to sew extra fabric into it.’

And although Nicole said she was never bullied, her classmates’ jokes about her weight began to have an impact on her self-confidence.

‘During my sophomore year, I tried to take my own life – I just felt so terrible about myself and my body. It was a terrible time for me but it did give me a reality check.’

Self-confidence: And although Nicole was never bullied, the jokes from her classmates made her have confidence issues 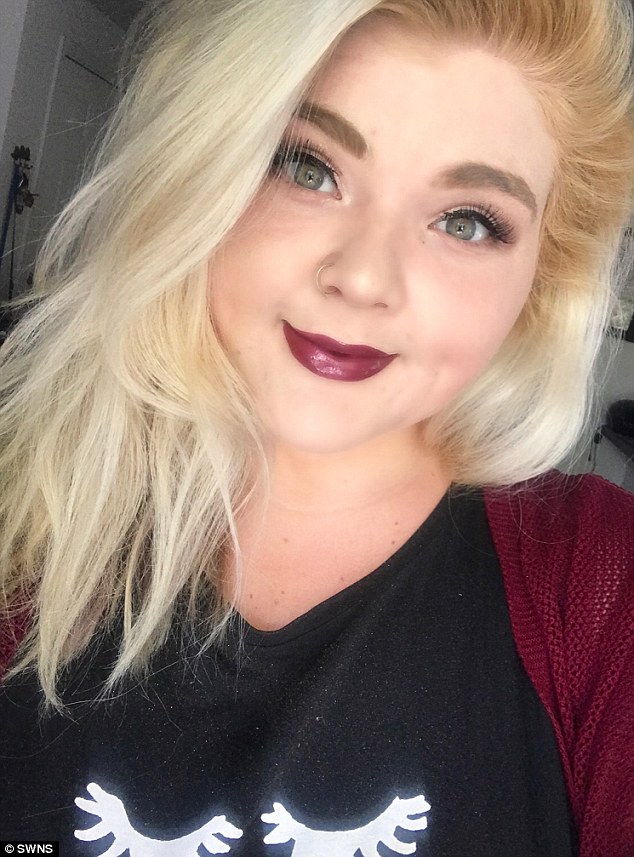 Feeling terrible: During her sophomore year of high school, Nicole tried to take her own life

Reality check: Although, it was a dark time it gave her the push she needed to get her body right

‘I knew I just had to do something about it because I knew that I had so much to live for. It gave me that final push I needed to make that decision for myself.’

The shame prompted Nicole to undergo a vertical sleeve gastrectomy in November 2014 as a high school senior, a procedure which made her stomach physically smaller.

In July 2017, Nicole, underwent further surgery when she had a gastric bypass, which divides the stomach and reroutes the small intestine.

Since going under the knife Nicole has lost an incredible 160lbs and is now a size medium, with photos showing her jaw-dropping transformation.

Growing up, Nicole was eating up to 4,000 calories every day, including large cream cheese bagels for breakfast, cheesy mini-pizzas between meals and greasy fast-food almost every night. 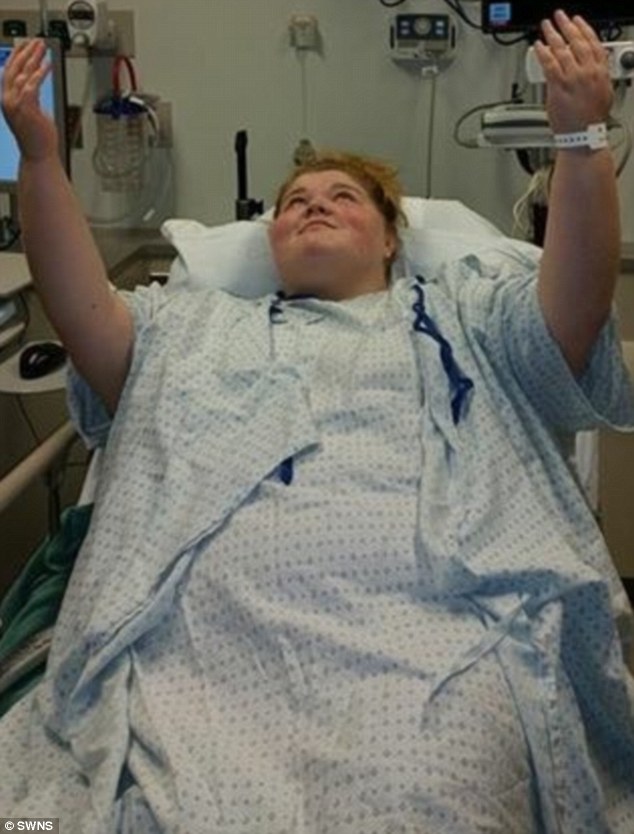 Shame: So in November 2014, as a high school senior, she had a vertical sleeve gastrectomy 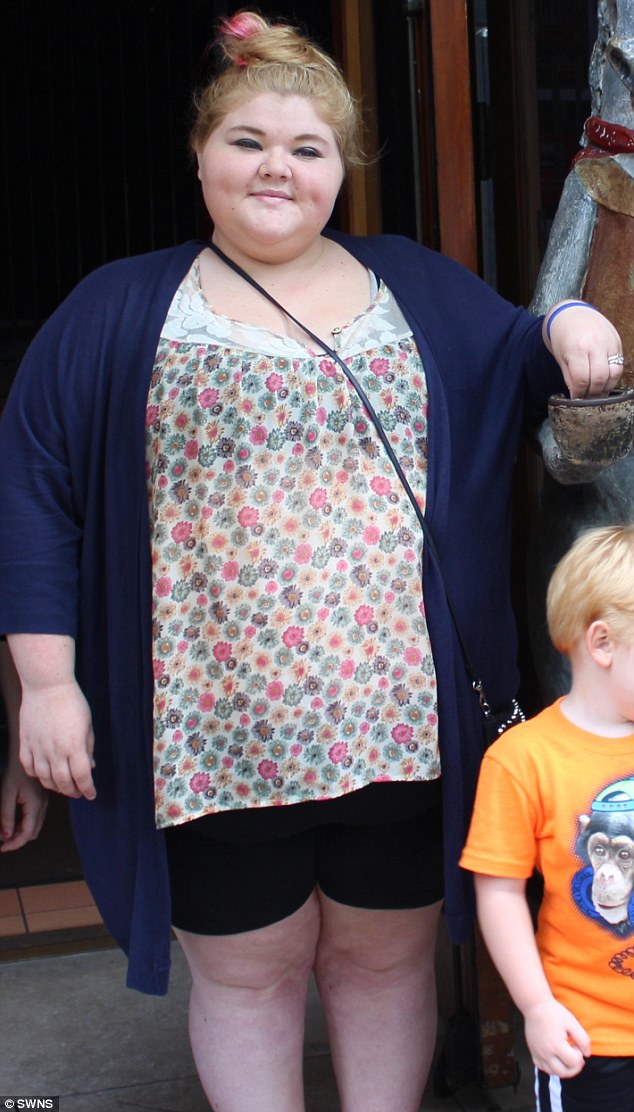 Another surgery: And in 2017 she underwent further surgery when she had a gastric bypass

Growing up: When Nicole was younger, she would eat up to 4,000 calories every day 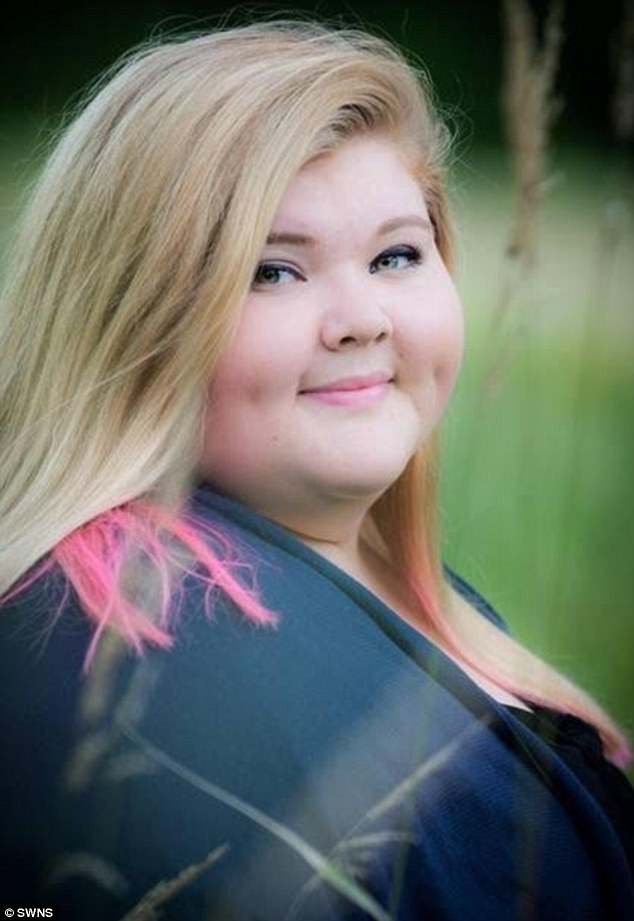 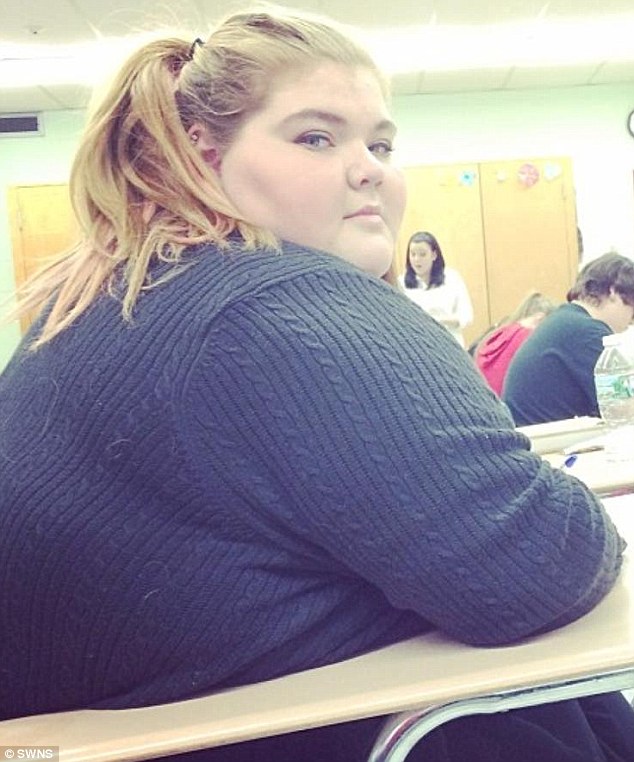 Runs in the family: Both of Nicole’ parents had undergone gastric bypasses as many of her family members struggle with obesity

But since the surgeries, Nicole has swapped her high-carb lifestyle for low-fat vegetable stir-fries, grilled chicken salads and her daily sugar-free coffee – the only fast food remaining in her diet.

Nicole was not unfamiliar with weight-loss surgery as both her parents had undergone gastric bypasses in the past and many of her family members struggled with obesity.

‘I was ten when my mom had gastric bypass surgery and a few years later my dad had it done,’ she said.

‘Because my parents had been through it themselves, they were really supportive of me.’

‘Growing up, fast food was a big part of our lives. Every morning as a kid I would have a bagel with cream cheese at Dunkin’ Donuts before school.

Supportive: Nicole said that because both her parents had done the surgery, they were encouraging 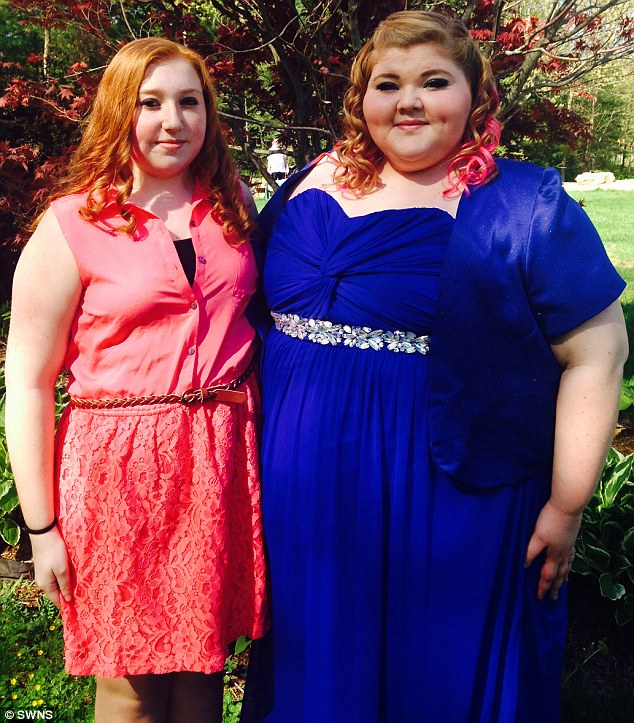 Carb lover: Nicole described herself as a ‘carb lover’ who would constantly eat 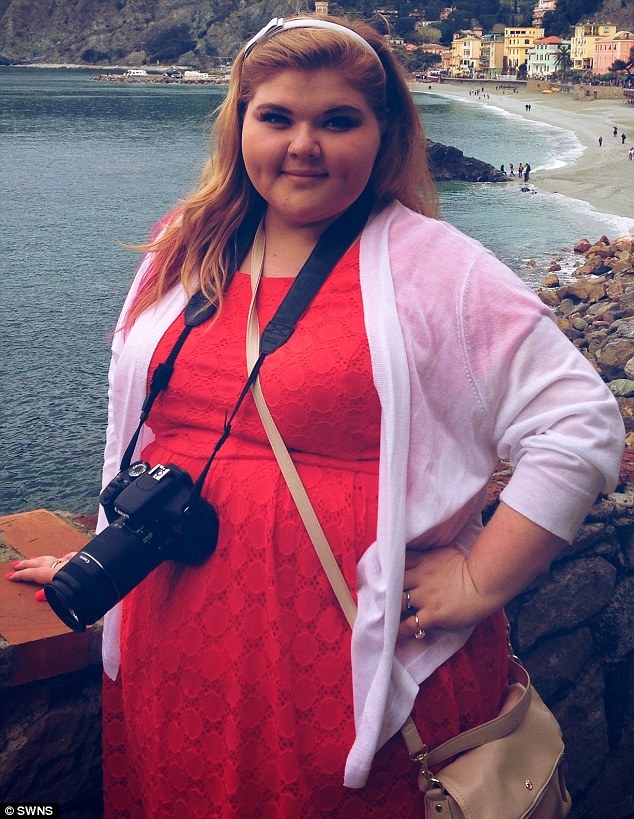 Trigger: Nicole said that now it’s a ‘trigger’ and she no longer eats fast food 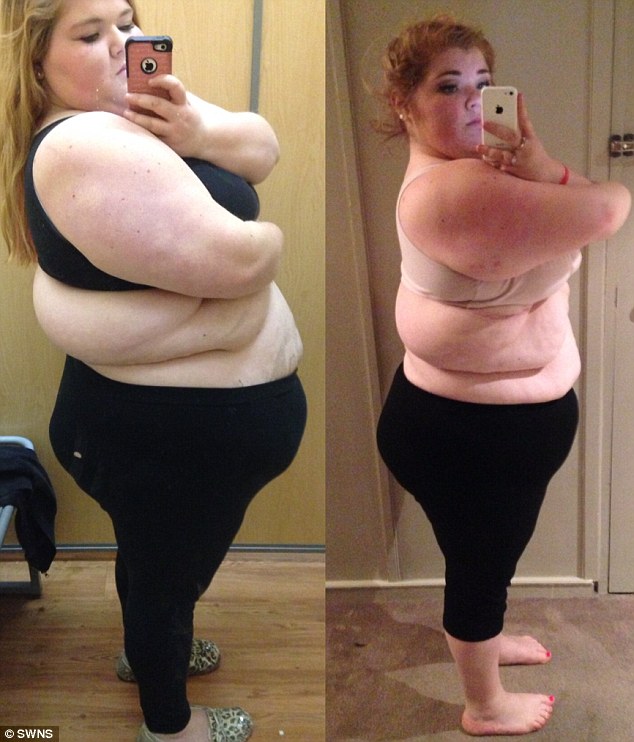 Burden: Nicole feels sad when she looks back at old pictures because she grew up with the burden of her weight

‘I was such a carb lover that I would have a hot lunch in middle school and then also eat a peanut butter sandwich and before dinner I might have a mini-pizza or a couple of Poptarts.’

‘Now, it’s a trigger for me so the only fast food I have is my Starbucks in the morning.’

Nicole said she never dreamed of having a dating life or a boyfriend in high school because she could not imagine anyone being attracted to her.

But after shedding 90lbs after her first weight-loss surgery, Nicole met her boyfriend, chef Christian Jepp, 26, at the end of her senior year.

The pair have been together almost three years and live together in Seattle.

‘My dating life was non-existent in high-school – I had so little confidence and I never thought anyone could ever be attracted to me,’ she said. 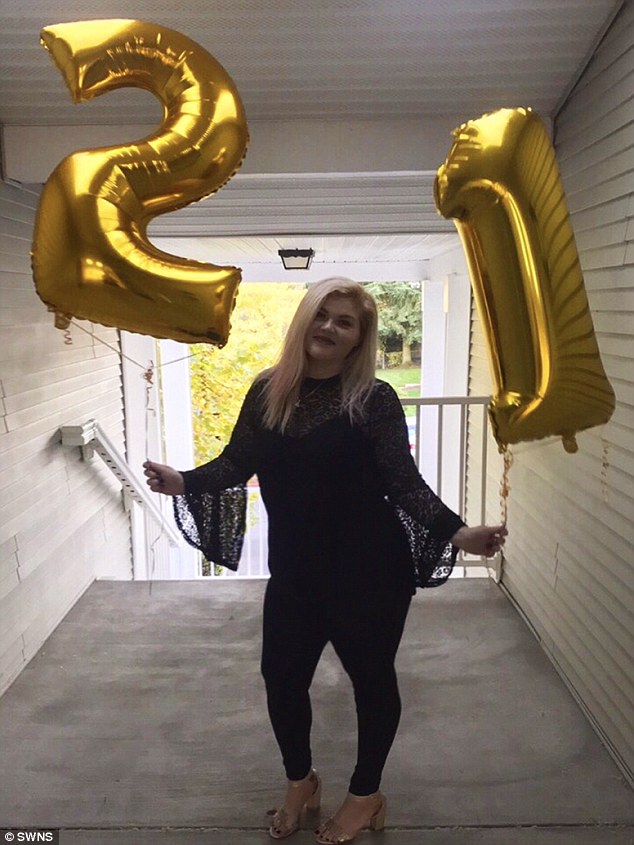 Confidence: But now, after losing the weight she feels more secure in her body 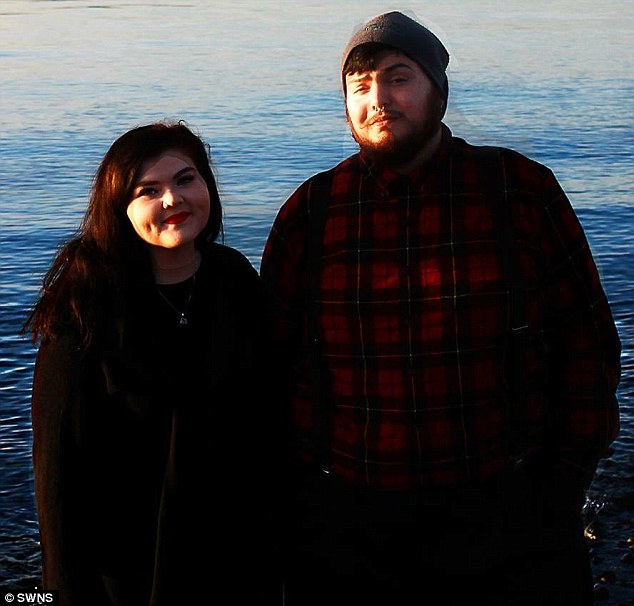 Relationship: She even has a boyfriend named Christian who she is ‘blessed to have’ 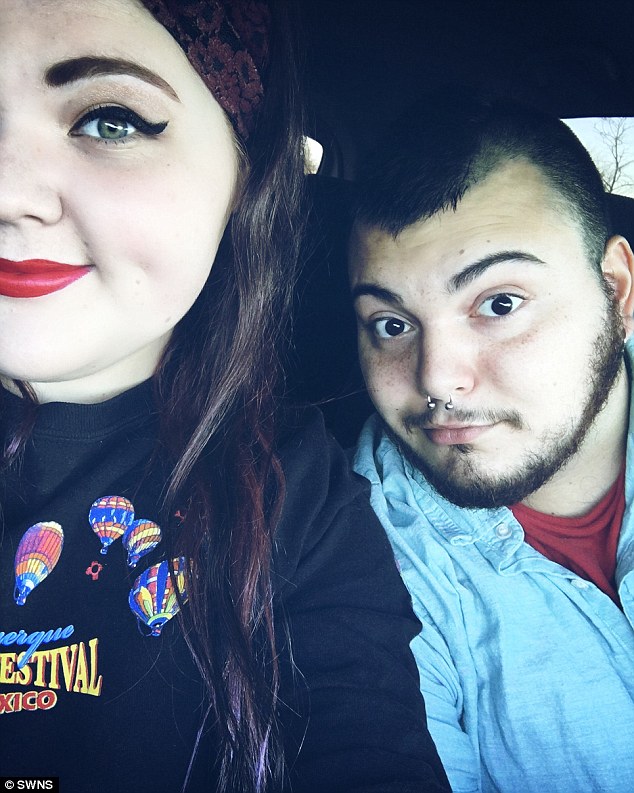 Own struggles: Christian has his own struggles with weight but has lost about 80lbs since he met Nicole her senior year

Motivated: Nicole said that she forces herself to look back at how far she has come to keep her on the right track

‘But after losing 90lbs I began to have more confidence in myself. I feel blessed to have such a supportive boyfriend like Christian.’

‘He has his own struggles with weight and has lost about 80lbs himself since we met.’

But despite the weight loss and slimmer size, Nicole still struggles with her self-image and confidence.

She said: ‘When I look back at those pictures from high school I feel really sad that I grew up with the burden of all that weight but on the flip side I feel really blessed to be where I am right now.’

‘It’s hard to shift your perspective sometimes. I’ve lost 160lbs but sometimes I still feel like that 357lbs girl.’

‘But I force myself to look back at how far I’ve come from and it keeps me on the right track and motivates me to keep going.’