SeaWorld Entertainment has made a deal to give its top executives about $6.8million in restricted stock awards, despite closing the gates to its 12 theme parks in Florida and Texas last month and furloughing 90 percent of its workers because of the coronavirus pandemic.

The awards are designed ‘to recognize employees for their extraordinary contributions and continued expected contributions to the Company and its long term goals during the global COVID-19 pandemic,’ the Securities and Exchange Commission (SEC) filing said.

SeaWorld Entertainment has made a deal to give its top executives about $6.8million in restricted stock awards. This March 13, 2020 file photo shows the entrance to SeaWorld Orlando in Orlando, Florida 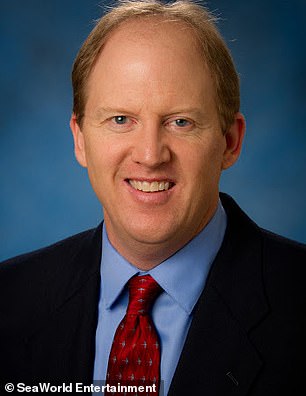 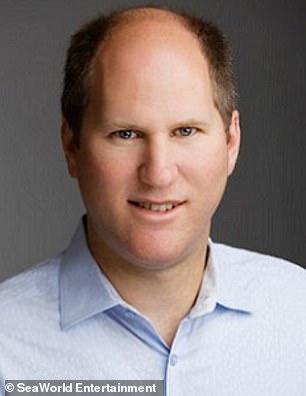 The deal stands provided they stay with SeaWorld for two years, the company said Tuesday in a filing with the U.S. Securities and Exchange Commission.

Under the terms, the executives get half of the stock awards on the first anniversary of the deal and the rest on the second anniversary.

Earlier this month, the company’s executive officers agreed to a 20 percent reduction of their annual base salary until the company resumes normal operations. 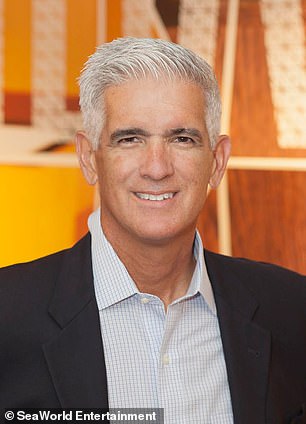 Last week, Sergio Rivera, who was the third leader of the theme park company to depart in just over two years

During peak season in 2018, the company hired more than 4,000 additional seasonal workers, many of whom are high school and college students.

Coronavirus is spreading quickly across states where SeaWorld has parks.

There were 5.2 million new claims for unemployment benefits filed last week, according to the latest Labor Department figures released on Thursday.

It means at least 22 million Americans have been thrown out of work in four weeks – making it the worst stretch of US job losses on record.

All businesses deemed nonessential have been closed in 48 states as the economy has essentially shut down. Some economists say the unemployment rate could reach as high as 20 percent in April, which would be the highest rate since the Great Depression.

The company made the furlough announcement in an SEC filing on March 27 which did not set a timetable for when staff would return.

‘They have caused significant disruption to our communities and are anticipated to do so for the foreseeable future.’

None of the company’s employees are covered by a collective bargaining agreement.

Workers will not receive payment beyond March 31. ‘However, subject to local regulations, these employees will be eligible for unemployment benefits,’ the letter continues.

The new new executives assumed their positions last week after the resignation of then-CEO Sergio Rivera, who was the third leader of the theme park company to depart in just over two years.

Rivera handed in his resignation just days after the company said they would be furloughing most employees. Rivera cited his disagreement with the board of directors’ involvement in decision-making at the company, according to a filing with SEC.

He was named the CEO of the company last November after his predecessor, Gustavo ‘Gus’ Antorcha, cited a similar reason for his leaving last September.

Rivera will also step down from the company’s board of directors.

‘The board remains united in guiding the company through the tough but necessary decisions to best position the business for long-term success,’ board chairman Scott Ross said in a statement.