While there was no upstaging the 28-year-old bride — a former girlfriend of financier Nat Rothschild — she was given a run for her money by Greg, 46, who opted for a dressing-gown like golden robe decorated with leaves. 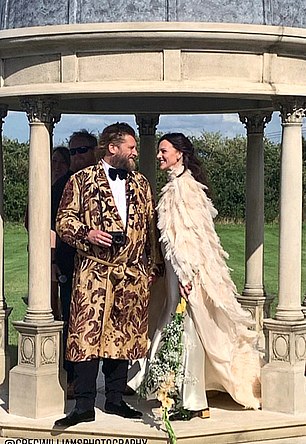 Vivacious model Eliza Cummings, who once starred in an Agent Provocateur advert devouring toast while wearing lacy black lingerie, showed off her wild streak in an elaborate cream feathered gown when she wed Hollywood photographer Greg Williams (pictured left cutting the cake and right together)

The couple cut their floral cake at the Berkshire nuptials to share with guests including Mamma Mia 2 star Lily James and former One Direction singer Liam Payne.

A guest tells me: ‘True to form, Greg was busy taking pictures the whole way through the party.’

Tempers in top restaurants’ kitchens can become as heated as the ovens, but Master-Chef star Monica Galetti has revealed that she suffered racial comments when she worked at Michel Roux Jnr’s celebrated Le Gavroche.

Samoa-born Monica, who is a judge on MasterChef: The Professionals, claims she was called offensive names by colleagues when she first worked as a commis chef at the two Michelin-starred dining room in Mayfair.

Newly arrived from Down Under, Monica accepted a job at Le Gavroche at a lower level than she’d been used to. 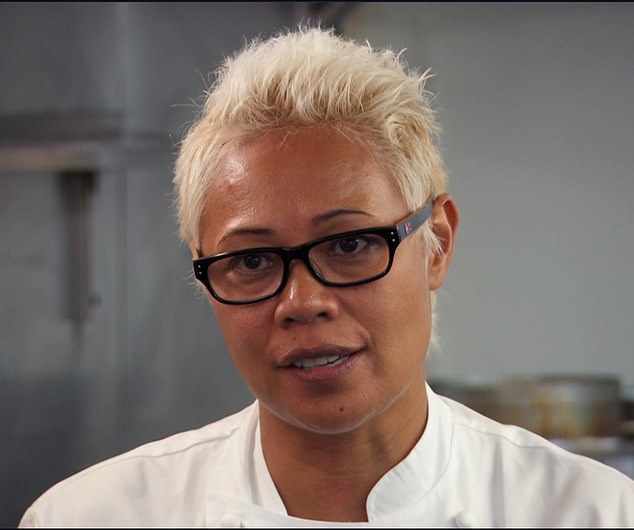 Tempers in top restaurants’ kitchens can become as heated as the ovens, but Master-Chef star Monica Galetti (pictured) has revealed that she suffered racial comments when she worked at Michel Roux Jnr’s celebrated Le Gavroche

She recalls: ‘Coming from New Zealand, where there’s lot of brown faces everywhere, it was weird to get to the UK and be referred to as coloured.’

She adds: ‘I mean, I’d be in the kitchen and someone would say, ‘Oh, yes, ask the black girl on the fish,’ and I’d be like, ‘Who are you calling black?’ So it was a huge adjustment.’

Monica, 43, eventually worked her way up to become senior sous-chef — the first woman to hold such a lofty position. Le Gavroche is run by Roux, who was a MasterChef judge until 2014.

‘My mum always told me to be strong, so I won’t let anyone walk over me,’ she declares. ‘All the women I employ are strong and independent, but you’ve got to give them the tools to be like that.

‘When they leave me for another kitchen, they’ll be able to stand up for themselves.’ 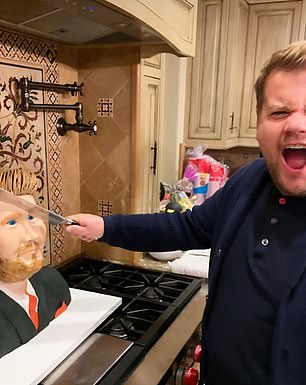 James Corden has survived a few cutting heckles in his time, but what about a new hair parting with a knife?

Corden: Anyone fancy a slice off the old block?

Funnyman James Corden has survived a few cutting heckles in his time, but what about a new hair parting with a knife?

Happily, it was only the star cutting his own hair — on an early birthday cake in the form of his head and shoulders.

Fans of Corden, who turns 41 this week, can look forward to seeing him reunite with his old friend Mathew Horne in the Gavin and Stacey Christmas special. The pair were said to have fallen out.

‘There was never any rift,’ Horne insists. ‘James and I have always been friends and we always will be. It’s great to be acting with him again.’ 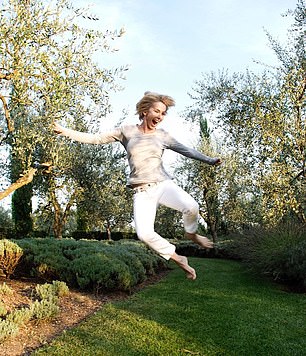 Trudie Styler seems as happy as ever

While some pop stars seem to find their marriages over almost as soon as they’ve composed a ‘break-up song’, Sting’s was built to last.

He celebrates his 27th wedding anniversary on Thursday and his film producing second wife, Trudie Styler, seems as happy as ever.

She shared with friends this photograph of her leaping into the air.

‘Jumping for joy or drunk and disorderly?’ she wrote underneath. ‘You choose.’

‘It depends totally on the star quality,’ she warns.

‘If you’ve got Leonardo DiCaprio and a young actress who’s just come up in her second or third role, I don’t think she should get the same amount.’

Speaking on the Spectator’s Women With Balls podcast, Joanie adds: ‘Actors like Leonardo are very valuable commodities: they bring in massive amounts of money, so deserve what they get.

Unfortunately, I don’t think there are as many actresses that have that pulling power.’

Summer holidays are no laughing matter for Ruby Wax.

The ebullient comedienne fell off a horse during a trip to Finland and has been left needing to wear a back brace.

‘My injuries are quite serious,’ says Ruby, 66, who was forced to cancel her show, How To Be Human, at the Edinburgh Fringe this week.

‘I am hugely disappointed and so sorry to everyone who has bought tickets.’ Get well soon, Ruby.

Earl Spencer enjoys adding to the collection of fine art at Althorp, his Northamptonshire stately home.

But Princess Diana’s brother let slip at the weekend that he prefers to keep a stash of racy works hidden from public view.

Hosting a VIP reception to show off artist Fabian Perez’s new collection, Charles Spencer said: ‘I’m slightly nervous looking at the number of women in negligees. I think we’re going to have to keep those in a more private place — along with the other naughty pieces we have.’

Downton Abbey’s Earl of Grantham is a patriotic soul who always sees the best in people.

If only the same could be said of Hugh Bonneville, who plays him. ‘I grew up with a simple patriotism, and now it is more complex,’ he claims.

‘I’m afraid that in the past three years we’ve become a joke. We are confused about our national identity.’

And he loathes Boris Johnson, calling his ‘duplicity and opportunism despicable’, telling Saga magazine: ‘He’s not like Trump. He has a brain; he has an education. But he should know better than to put people’s lives or the future of our country at risk.

‘Some of the bombast and the slight smirk that goes along with anything he may say, as if it’s all a huge joke, is very scary and not helpful diplomatically.’