Kate Moss did not shy away from controversy when she attended the wedding of Prince Christian of Hanover and Alessandra de Osma in Peru.

The 43-year-old supermodel also used the trip to show support for South American photographer Mario Testino, who was accused of 13 counts of sexual harassment — which he denies — earlier this year.

Taking boyfriend Count Nikolai von Bismarck, 30, as her wedding guest, Kate visited the Mario Testino museum in his home city, Lima. Sporting a leopard print top and summer hat, she posed for a photo next to her 2013 Vogue Paris shoot by Testino.

The image was posted on the museum’s Instagram account with the caption: ‘Thank you, Kate, for your visit and for sending us a pic with one of our favourite portraits! Always a pleasure having you here.’

Kate showed her support for South American photographer Mario Testino, who was accused of 13 counts of sexual harassment, by visiting the Mario Testino museum in his home city, Lima, and posting this photo on Instagram

But has Imrie drawn on Dame Joan as inspiration for her new novel, Sail Away? Suzy Marshall, the protagonist of Imrie’s tome, ‘had played the principal role in the multi-award- winning mid-1980s TV drama series Dahlias’, which doesn’t sound all that removed from Dynasty in which Collins starred as Alexis Carrington. Suzy ends up resorting to working on a cruise ship; Dame Joan is godmother of cruise ship SS Joie de Vivre. Imrie unkindly notes that ‘although at the time Dahlias had been a worldwide hit, now, more than 30 years later, everyone had forgotten both the series and Suzy’.

The 27-year-old (left), single after splitting from property developer Niccolo Barattieri, was made godmother to Viscountess Weymouth’s second son, Henry, born to a surrogate in LA in 2016.

Emma, 31 (far left), who also has a four-year-old son, John, with her husband and heir to the Marquess, Viscount Weymouth, hosted the christening at their Longleat estate in Wiltshire, where Made In Chelsea star and fellow godparent Mark-Francis Vandelli shared this picture. 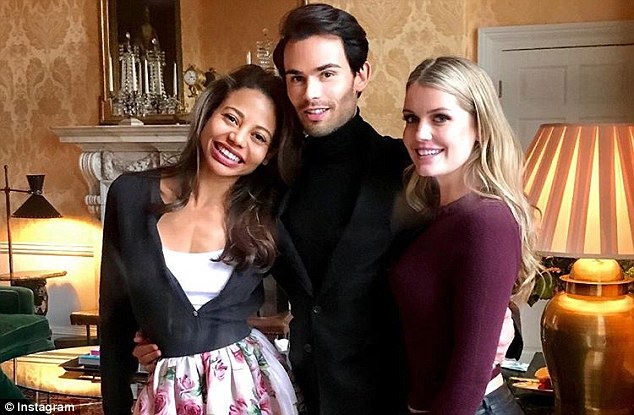 Former Sex Pistol John Lydon, who caused outrage as Johnny Rotten with his punk anthem God Save The Queen, is looking forward to the royal wedding of Prince Harry and Meghan Markle and says he will be watching it on the telly.

‘I love all that feudalism and flag-waving and aeroplanes flying overhead. Pageantry, I’m up for that.’

God Save The Queen, released in 1977, was banned by the BBC as it compared Britain’s Royal Family to a ‘fascist regime’ and claimed that the monarch is ‘not a human being’.

Bake Off star Prue Leith refuses to be intimidated by the use of a Russian nerve agent in Salisbury. ‘Don’t forget, I was around in the Sixties with all the Cold War horrors and we all thought we were going to get nuked then,’ says Prue.

‘So this Russian poisoning thing will blow over eventually. We do live in a frightening world. Somebody asked me if I would use a sex bot the other day and I said I don’t even know what one of them is.’