Very rarely do talents combine so exquisitely as did those of lyricist Don Black and the late Matt Monro, forever known to fans as ‘The Man With The Golden Voice’ — not least for his rendition of Black’s Oscar-winning hit, Born Free.

But, with what would have been Monro’s 90th birthday fast approaching, his only daughter, Michele, has condemned the BBC’s decision to commemorate the anniversary with a Radio 2 ‘special’, The Matt Monro Playlist, fronted by Black.

Michele, who suffers from multiple sclerosis, had hoped that her own radio documentary proposal would find favour.

‘No one has the material I’ve got,’ she tells me. ‘I offered the BBC the documentary plus a special, Matt At The BBC, which included stuff they don’t own.’

Very rarely do talents combine so exquisitely as did those of lyricist Don Black and the late Matt Monro (pictured), forever known to fans as ‘The Man With The Golden Voice’

‘I then heard that Don Black, whose Radio 2 show recently ended, will be coming back just to do a special Matt Monro show on November 29.

‘He’s got no rare material and he hasn’t interviewed any of the family. I’m very hurt and upset.’

This might sound perplexing: Black was, after all, Monro’s manager, as well as the writer of one of his greatest hits, Walk Away. 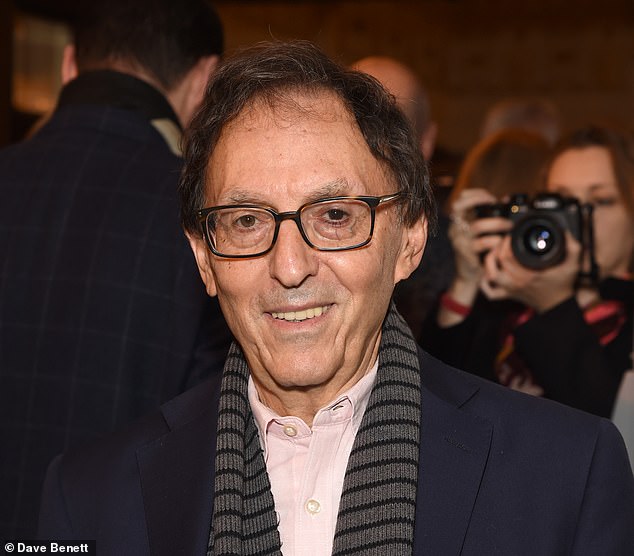 The BBC have chosen to commemorate what would have been Munro’s 90th birthday with a Radio 2 ‘special’, The Matt Monro Playlist, fronted by Black (pictured)

But Michele, 60, says the family was dismayed by his authorised biography, Wrestling With Elephants, published 18 years after her father died of liver cancer, aged 54, in which Black recounted Monro’s losing struggle with the bottle.

‘It wasn’t publicly known before that. Don was supposed to be Dad’s best friend. He can never take away the hurt he caused my family, and I will never forgive him for it.’

Black, 82, is saddened by Michele’s summary, pointing out that Monro’s showbusiness friends — ‘Dave Allen, Bruce Forsyth, Jimmy Tarbuck, Mike and Bernie Winters’ — were well aware that ‘Matt drank too much. It was not ever said with any venom,’ he assures me, adding that his role in the tribute programme is extremely limited. 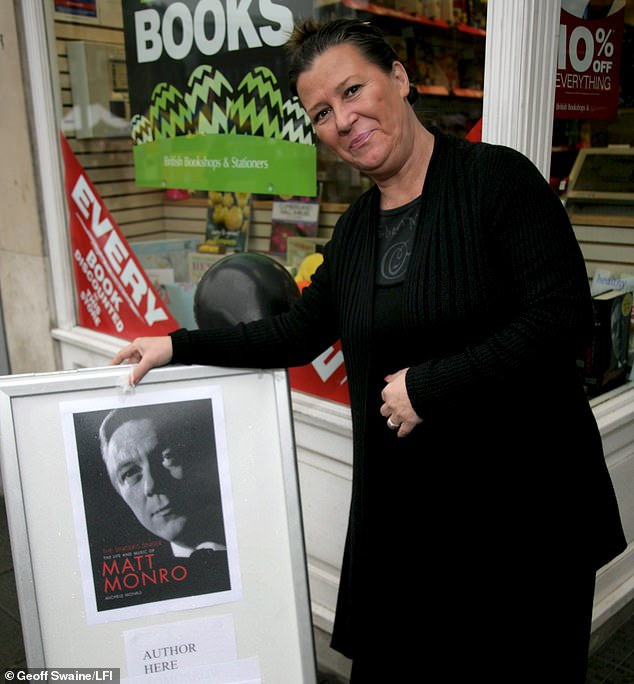 But Munro’s daughter Michele (pictured) has condemned the corporation’s decision, having hoped that her own radio documentary proposal would find favour

‘My producer put it together; I just read the links,’ he explains. ‘I loved Matt Monro. I played him every single week for eight years [on my show]. ’

Michele’s four-hour retrospective of her father includes contributions from Paul McCartney, Cliff Richard and Johnny Mathis among many others, but not Don Black, of whom there’s ‘hardly a mention’.

It is now going to be made available on YouTube today.

‘Rather than it never be heard, I’ve had to swallow my losses and put it out free of charge,’ Michele says.

Thandie’s the icing on her cake

Turning 48, the Mission: Impossible 2 actress was delighted to receive a specially made cake — decorated with a picture of herself in a pink dress — delivered to her home in North-West London.

‘My darling friend helped surprise me with this amazing, delicious cake,’ says Thandie, who also starred in Line Of Duty.

The actress, who spent the day with her husband, Mamma Mia! 2 director Ol Parker, and their three children, adds: ‘It is the tastiest art imaginable. Delivered to my door during lockdown.’ 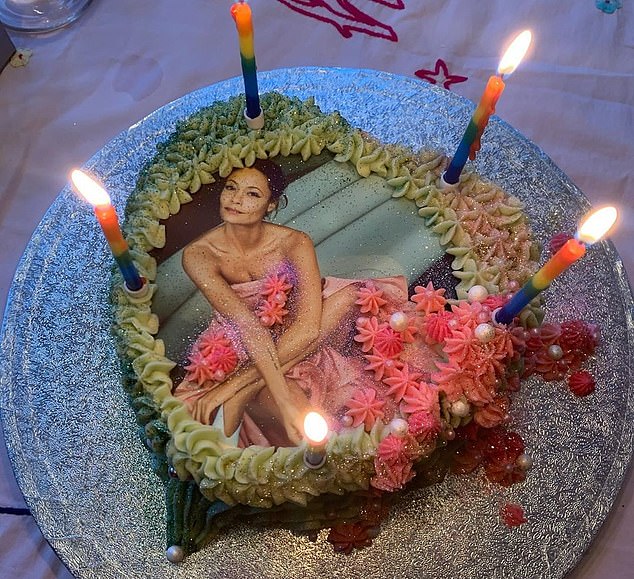 Keira reveals the secrets of her business scents…

Paid millions to advertise Chanel, Keira Knightley says modelling is one of only two lines of work in which women can earn more than men.

‘I’ve made most of my money as a model,’ admits the 35-year-old actress. 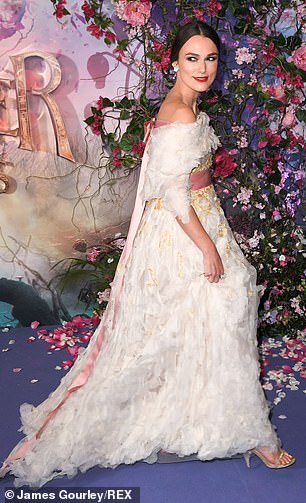 ‘I go on red carpets where you’re given marks out of ten and you have cameras up and down your body.

‘Still the No.1 career in the world — the only one — where a woman can earn more than a man is modelling. Or prostitution. And that says everything it needs to say to young women.’

The Atonement and Pirates Of The Caribbean star (right) is said to have amassed a fortune of about £50million, but revealed in 2014 that she gave herself a salary of £30,000 to stop her from losing touch with her less affluent friends.

She adds: ‘The way you look is more important than what you have to say or what you think. And that’s the world we still live in today.’

‘I see absolutely no reason whatsoever for a woman of colour playing Anne Boleyn, except to make a spurious political point that in my view is bordering on racial aggravation,’ says the former I’m A Celebrity contestant, born in Jamaica.

‘People would be extremely offended if there was a play about Maya Angelou and she was played by Meryl Streep — so the reverse has got to be true as well.’

Gabby, the First Lady of Zoom… 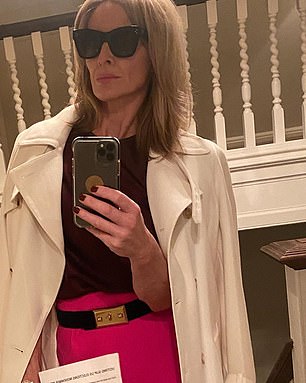 Melania Trump, is that you?

TV presenter Gabby Logan (right) surprised friends when she dressed up as the U.S. president’s wife for a party on the video platform Zoom with her sister, voice actor Louise Yorath, who lives in Nevada.

‘Mum thought we should surprise her and dress up in USA-related costumes,’ explains mother-of-two Gabby.

‘From Eminem, Dolly Parton and Britney [Spears] to Donald, I think we pulled it off with 45 minutes’ notice.

‘If you are in any doubt, I went for Melania!’

‘I did one small job where I recorded an audio book from my loo seat,’ says Wilson, who plays Mrs Coulter in the BBC’s hit Sunday night drama.

‘I read a Virginia Woolf novel, To The Lighthouse — and my flatmate had to put duvets around the toilet door to soundproof it. I had to keep going outside to shout at a bird that kept tweeting.’

‘The largest number of events I went to in one evening was nine,’ the former head of Conde Nast says of his pre-pandemic life.

‘My PA spent a whole day working out how it was possible to spend 20 minutes at each. In lockdown I was invited to nothing, so I missed going to nothing. Fear of missing out didn’t exist.’

Faulks returns to the scene of a bestseller

Lockdown inspired Birdsong author Sebastian Faulks to revisit the locale of Human Traces, his best-selling novel set in Austria on the cusp of World War I.

‘I have been wanting to write this novel for at least ten years,’ he says of Snow Country, to be published next autumn.

‘The second half was written during the lockdown, in circumstances that the radio assured us hourly were “unprecedented”. But they weren’t, were they?

‘Isabelle, the main female character in Birdsong, had, after all, died of Spanish flu, a virus more widespread and deadly than Covid-19. There is an echo of that death in the new book.’

A third Austria-set novel will ‘complete my exploration of what a peculiar species we belong to’, adds Faulks.

Judi Dench appears to have formed a trade union of her fellow theatrical dames, such as Maggie Smith and Eileen Atkins.

‘We don’t have Dame meetings, but we have Dame phone calls from time to time,’ she reveals.

‘I might get to see Joan Plowright, if we sit in a garden, I suppose, but I never know the rules.’ Dame Judi, who suffers from macular degeneration, jokes: ‘I don’t think any of us can see or hear.’